I have used 8 primers to amplify the sequences of bacterial genes and then pooled the data to generate amplicon sequencing data. I wanted to see the OUT/ASV clustering in the dataset.

For the same, I have imported the data in qiime2 followed by denoising using DADA2. Created classifier using fit-classifier-naive-bayes from data using SILVIA full-length sequences. I annotated the information using feature-classifier classify-sklearn. I visualized the information using metadata tabulate followed by taxa barplot. However, most of the features are unannotated. I am attaching the exact commands used for the process.

Please suggest if the approach is correct or some other plugins/parameters need to be changed to get a complete annotated feature table. 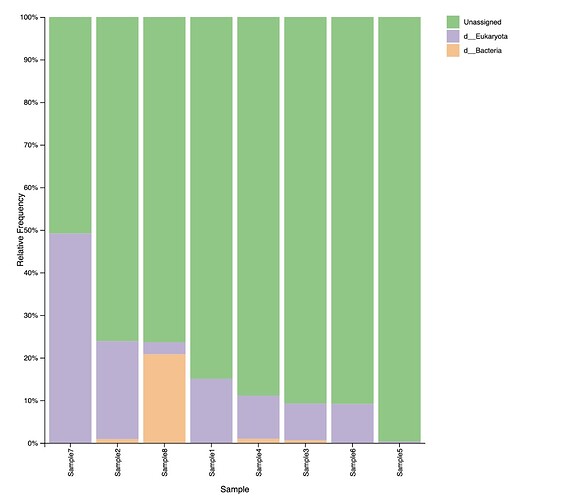 As you can see most of the output data is unannotated

Hi @Dhwani_Dholakia, sorry for the slow reply. @Keegan-Evans will be with you soon!

Thanks for providing the details that you have about your analysis! I am wondering about the genes you are targeting in your study, it could just be that SILVA is not the correct database to use with your project.

However given the extremely low rate of annotation that you ended up with, I would suspect that somehow you still have "garbage" data in your samples. This often happens when primer sequences are not removed before any other steps are performed in the analysis. Making sure that you have removed all of your primer sequences is where I would start. You might take a look at this forum post.

You say that you use DADA2 for denoising, but you do not say what sequencing technology was used to generate your data. I bring this up because DADA2 is specifically for use with Illumina-sequenced data.

Also, DADA2 generates ASVs, which are a more precise, modern equivalent to OTUs. While it is possible to cluster again afterwards, take a look at the following resources and consider not clustering after denoising.

Hopefully this will help you move forward with your analysis! If this doesn't get things moving forward or you have more questions let me know.

How do we remove primer sequences, because here we have used 8 different primers. Usually, the cutadapt accepts one primer pair.

Also, why does primer act as garbage? Its a part of natural sequence just like the next amplicon, that is amplified

They have to be removed before denoising with q2-dada2. This is to avoid any issues with DADA2's chimera removal tools. Source.

You might want to checkout this video from one of our workshops on denoising.

An off-topic reply has been split into a new topic: Help Needed Generating Database with RESCRIPt