To remove primers and spacers or not? - Zero usable reads after DADA2

I have been running into this issue and have yet to find a good solution. Here is an outline:

Our sequencing core demultiplexes the data before returning the reads. They also employ the use of heterogeneity spacers. Thus the reads we receive back still have the spacers and the primers in the sequences. Thus the amplicon read looks roughly like this:

Following the advice of the forum, using the cutadapt plugin, I removed the primers (and thus the spacers too), but when the DADA2 step comes, I essentially get 0 reads (commands below):

And here is the head of the output I get from the DADA2 denoising: 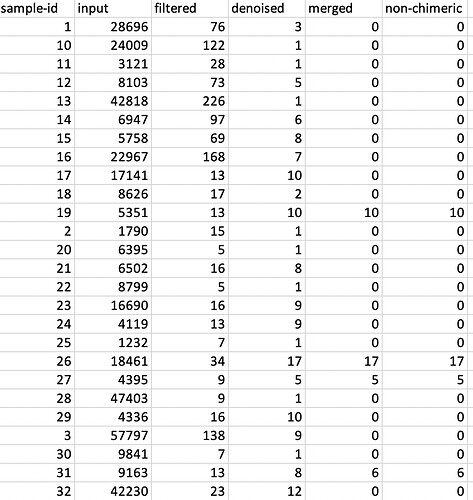 And here is the quality visualization:

Now, here is the issue: I have heard conflicting advice from people at my University and here on the forum - is it best to trim primers off prior to DADA2 denoising, or should I leave the primers on? It seems the consensus on the forum is to remove primers. The consensus at my University is to leave the primers on to help align the sequences, since the primers are the conserved region, and thus using the conserved portion to align highlights the differences in the variable regions.

Should I leave the primers, and just trim the spacers, or do you think something else is going on here? Returning effectively zero sequences after denoising and chimera removal tells me something isn't right here.

Removing just the spacers is tricky, though, because the sequencing core employs 4 different spacers, thus I would have to run cutadapt four separate times on the four sets of reads with different spacers, and thus run DADA2 four different times. I would think this would mess with modeling used within DADA2, and thus the error rate and filtering, chimera removal, etc. would be modeled on a subset of the data, and not the entire dataset.

Any help is greatly appreciated!

Hi @FrancineMarques, Thanks for searching through the forum first and providing us in depth detail about your situation. Really helps with the troubleshooting! This is a common enough scenario so let’s take a closer look. Your dada2 stats summary show that your major loss occurs at the initial filtering step. Denoising/merging etc all look good! So, moving backwards one step, looking at your demux.qzv quality plots, it looks as though your reads are unfortunately not high in quality. There is …

Maybe this can help? it looks like you have sequences on input, but the quality plots look suspect. Is there proper overlap between the forward and reverse reads?

Hi @ben, Thank you for bringing this post up! I had seen this in the past. I have analyzed this data in many different ways (i.e. with primers, without primers, leaving most of the bases and truncating to the minimal allowed overlap, etc.). In my most recent run, that I showed above, I truncated to F 245 and R 220. The V4-V5 amplicon with the 515F/806R primer set is ~300-350 bp, so that would be ~115 bp overlap.

I am currently running it again and trimming more aggressively to F 200 and R 180 which will give me ~30 bp overlap. Will report back when it is done.

In regards to my other question, could you provide some guidance: what are your thoughts on trimming primers versus removing primers prior to merging?

I think you need to remove them before the DADA2 step to be honest. You saw my last post where I wantonly went looking for primers/adapters that weren’t there. I am not sure about the V4V5 region as I have been trying to help folks with the V4 and V3V4 region, but I would just make sure that the 515F/806R is correct for the V4-V5 region, I think the 515F to 806R is specific for the V4 region. If that’s the case, then the V4 region is approximately 250bp and your F and R amplicons should be around 150 bases.

I think that the 515f/926r primers are correct for the V4V5 region as this publications has used:

I would try it with these changes. Ben

What is your output with this? If we’re running Illumina, you may not find any primers/adapters.

Here is more detail about the primer set you’ve been running:
http://www.earthmicrobiome.org/protocols-and-standards/16s/

Thank you for pointing out my mistake, you are correct the 515F/806R is specific to the V4 region only. From what I have read, and including the EMP protocol, it looks like the expected amplicon size is ~300-350 bp from the 515F/806R primer pair, and like you said the V4 region is 250 bp.

The reads we did were indeed PE 250 bp reads, meaning we should have LOTS of overlap between the two sets. Which brings up another question - do you make your calculation for overlap based on the length of the V4 region (~250 bp), or based on the expected amplicon size(~350 bp)?

I do it to the V4 region not the expected amplicon size because the longer the reads are the more likely there is poor quality. If you are merging, what happens is that I think DADA2 is expecting only an overlap of 20-50bp/nt thus you have a forward amplicon of 150 and reverse amplicon of 150 with good quality you get F forward 150 nt and R reverse 150 nt and you have an overlap of 50nt.

However, if you’re using DADA and you have F forward 250nt and R reverse 250nt thus may be getting filtered out, but you have to troubleshoot - I have no idea what is going on under the hood.

edit: I think, this is just a guess, that all of your amplicons are getting filtered out because they are poor quality around the areas you pick to trunc

You are absolutely right on the filtering aspect. I wasn’t taking into account that 1) the F & R reads were very low quality greater than 200 nt in length and 2) since I used cutadapt to remove primers and spacers prior to DADA2, my F reads were now only ~220 nt and my R reads ~210 nt, so with my truncate length in the original script of F @ 245 and R @ 220, I was losing almost all reads at that point anyways since the reads after cutadapt were already shorter than my truncate length.

I re-ran everything with the DADA2 forward and reverse truncate length at 200 and 180 nt respectively, and got what seem like more reasonable results. After filtering, denoising, and chimera removal, I am left with ~40-60% of sequences for most samples. I would hope for more retention, but I may have to play with the DADA2 parameters a little more.

I am still a little concerned about orienting the overlap based on V4 size (250 nt) versus amplicon size (350 nt). My thought is, and this is just a guess, we should take into account the full amplicon size, because we are sequencing the entire amplicon, not just the V4 region, correct? so if we truncate both reads too short, then there won’t be any overlap. It looks like @Mehrbod_Estaki summed it up well in this post where he said to use the amplicon size: Low frequency counts after DADA2 (7%).

Of course, this depends on your primers and sequencing method! You may have sequenced something larger.

Sorry about the delay response in this. I would agree with @ben on this that your quality scores are unfortunately tanking too early for your current truncating parameters. As the stats results show you are losing most of your reads at the filtering step which has nothing to do with overlap, that’s a later process. Personally I wouldn’t really bother with trying to merge them, you will have much better retention if you used only one set of reads, in your case the reverse actually looks better than forward. You can probably set your truncating at 150 safely on the Reverse, and maybe gradually move it up 10-15 at a time if you really care about the length. From personal experience you are going to see very little benefit from say 150 bp read vs 170 or 190, especially in the V4 region.

As for removing your primers or keeping them in, I’m not sure if this has been analytically shown to be beneficial in short reads, in contrast though removing primers does seem to improve taxonomic classification later, albeit very little. Feel free to experiment with both and share your results! Would be curious to know. 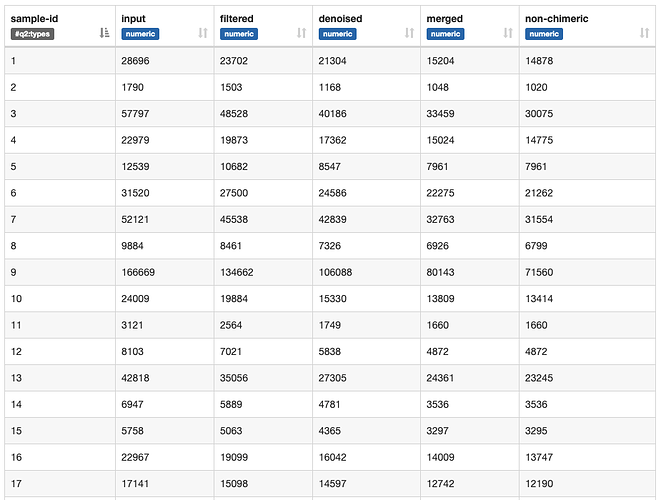 Thanks for that tip.

edit: My suspicion is that while the quality does matter, the quality helps with the merging. But you have to truncate the sequences while preserving quality. Ben

Thanks for all your help, much appreciated, Ben!!

So I would recommend bumping up the truncation lengths just a little bit… maybe 160 + 150 and see if that is enough.

I agree with @Nicholas_Bokulich’s points. The potential bias that can be introduced because of the merging issue should be considered. Using reverse only reads will be safer if that is a concern, and I’m certain you will retain even more reads that way, but you do have good numbers currently so that shouldn’t be your only motivation there. It’s always fun playing with those parameters! A lot to be learnt from just fine-tuning them

Thanks @Mehrbod_Estaki & @Nicholas_Bokulich for the insights! I will play around with the parameters a bit and see how it changes the data. Really appreciate all your help!