I have a quick question, I had previously rarefied the table.qza and exported it to work in R-studio, but prior to working in R, I realized I had to assign guilds to the OTU’s since I only need the ectomycorrhizal species for my study. My question is, I rarefied my data based on the frequency of all the sequences in my data, which included saprotrophs, pathogens, etc, could I have missed valuable information doing it like this? If so, should I export the complete table.qza, without rarefying and assign guilds. Followed by rarefying the data?

I really appreciate your help.

My question is, I rarefied my data based on the frequency of all the sequences in my data, which included saprotrophs, pathogens, etc, could I have missed valuable information doing it like this?

Assigning guilds sounds like an extension of taxonomy assignment (I assume that is how guilds are being assigned). So I think the answer really depends on your application.

Yes, you could be losing information in the sense that you will only be assigning guilds to features that are retained following rarefaction. But if you will ultimately rarefy, those features may be lost anyway (since rarefaction selects features at random, there could be some variation in which features/taxa/guilds are retained, but with a large enough sample size it should not matter that much). So it may be “6 of one, half dozen of the other”.

I think I would personally assign guilds before rarefying, since that information could be used in other ways (e.g., construct taxa bar plots or run ANCOM on non-rarefied tables). But it all really depends on your own experimental goals.

That's what I was thinking. So I went ahead and exported table.qza, assigned guilds and out of 2125 OTU, 998 were assigned to a guild. My question now is, how can I import this information back into qiime? I can use the normal table.qza on qiime, but how do I import the table containing the guilds? Can I import them as a metadata and use it to filter out the samples that are Ectomycorrhizal and then rarefy? Or what is the best way of doing this? I have searched the internet quite a bit and I am slightly lost because the new table I created has the taxonomy assigned, menawhile the table.qza in qiime has and ID instead.

using this guild information as metadata would probably be the most straightforward thing to do.

If the latter, it should be fairly easy to just relabel with the correct sample ID and use this file as metadata, e.g., in the qiime feature-table filter command.

If these are unique IDs, you can either:

That file will contain all taxa that are EMF, and you can use that list to filter those taxa as shown here. Make sure to use --p-mode exact if you go this route.

There are a few different ways to do it, but these seem like they might be the most straightforward. If EMF fungi fall into a single clade you can just filter out that clade as shown in the filtering tutorial, which is probably even more straightforward.

The ID on the table.qza picture I attached above are the ones created in qiime. I am not sure if the output from FUNGuild is in the same order as I put them in, so I am unsure how to properly add the ID to them. I did create the OTU table in qiime, by using qiime taxa collapse, so technically, can I use the collapse table to run all my analysis, instead of using the frequency[feature] (table.qza)?

If so, I can easily define what sample belong to ectomycorrhizal since the collapsed table was the one that was used in FunGuild.

I did create the OTU table in qiime, by using qiime taxa collapse , so technically, can I use the collapse table to run all my analysis, instead of using the frequency[feature] (table.qza)?

yes, that would be fine and the collapsed table is still a FeatureTable[Frequency] artifact. The only possible issue is that your features would now be taxa, not sequence variants, which changes the analysis and interpretation a little bit (e.g., in alpha diversity you would not be looking at the # of unique sequences, rather the number of unique taxa detected in each sample). But if that’s your goal then that’s not a problem.

If so, I can easily define what sample belong to ectomycorrhizal since the collapsed table was the one that was used in FunGuild.

Awesome! Glad that will work for you.

That would be perfect, as I am actually trying to look at the taxa diversity and how it changes in burnt and un-burnt units. So it should work!

So I am having a problem running the codes and getting results. I have a collapsed table.qza (= taxonomy-table.qza), created the EcM-data.txt and ran the following code:

Plugin error from taxa:
** At least one filtering term must be provided.**
See above for debug info

If I manage to figure it out, by tomorrow (Sunday), I will update the message.

You're almost there! The issue is that you need to use either --p-include or --p-exclude — the contents of EcM-data.txt are what you want to pass to one of these parameters. You do not want to use the query-delimiter parameter (that parameter is just telling

whether your taxa to include/exclude are separated by commas or another character. You are using commas (the default delimiter) so do not need to specify anything different)

So close, I actually tried that last night but I had left the delimeter parameter. Either way, I just ran the code as you said, and now I get this error. 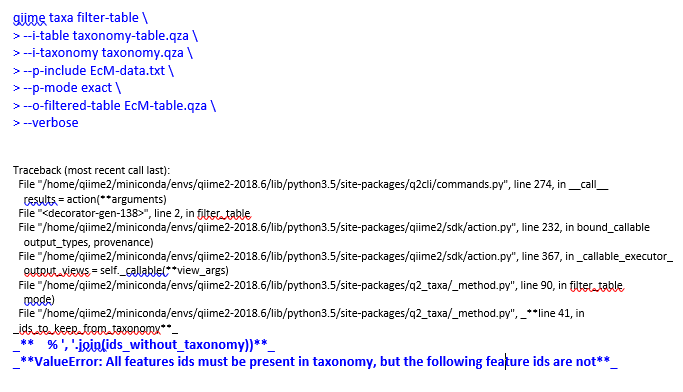 I will check my table and make sure the ID's are the same, which I believe they are, as I had checked them before. Please let me know if you have any suggestions, in the meatime I will troubleshoot.

So I went ahead and looked at my guild-metadata.qza and taxonomy-table.qza and compared them to taxonomy.qza, and they all have the ID's present, with the exception of the ones that have ;; etc.

It appears like all the taxonomy that contain those types of symbols on the metadata (;; etc) are not present in the taxonomy file, and if they are, they do not contain the symbols. Could this be the problem?

It appears like all the taxonomy that contain those types of symbols on the metadata ( ; ; etc) are not present in the taxonomy file, and if they are, they do not contain the symbols. Could this be the problem?

Bingo. The taxonomy only contains as many levels as could be confidently classified. Hence, you see ASVs classified to family level without the “;;” at the end. When you use taxa collapse or taxa barcode, you collapse at a specific level and the empty levels are appended to the end to “fill in” missing levels, so you get things like “…Mycosphaerellaceae;;”.

So you are correct — just delete those empty levels from the end of your taxa names in EcM-data.txt and it should work.

Sorry to bug you again. I did as you said, removed all the _; from all the taxa names in EcM-data.txt and I still get the same error. I have attached the EcM-data.txt (21.1 KB)
file in case you want to take a look at it.

Is it the exact same error? Does it list all taxa in EcM-data.txt or just a few? Could you share the table and taxonomy?