Is there a "general" accepeted dysbiosis index or score?

I am new to the science of microbiomics and just started to learn about qiime2 with the help of the available tutorials (which are really great).

Now, I was wondering if a "general" accepted dysbiosis index or score for microbiomes exist. If so, is such an index/scoring system already implemented in qiime2 (maybe as a plugin)?

In the literature I found several attempts to define dysbiosis; often from an ecological view point that in a disbiotic microbiome a niche is not occupied and so pathogens can subsequently fill this niche (or due to changes in the host enviroment, e.g. pO2-changes, pathogens can occpuy a niche). However, to develop a score for dysbiosis based on this definition, the core metabolic functions of the (human) microbiome (as well as the potential probiotic or commensal bacteria which constitute this core) must be known. Bacteria which do not belong to this core, could then be scored as dysbiotic.

In your opinion, is the development of such a scoring system (or a similar one which relies on another definition of dysbiosis) possible and could be robust/meaningful?

An answer would really help me

Now, I was wondering if a "general" accepted dysbiosis index or score for microbiomes exist.

Not that I know of. However, I'm more on the numerical ecology side of things, and the clinical microbiologists may have better ideas!

In your opinion, is the development of such a scoring system (or a similar one which relies on another definition of dysbiosis) possible and could be robust/meaningful? 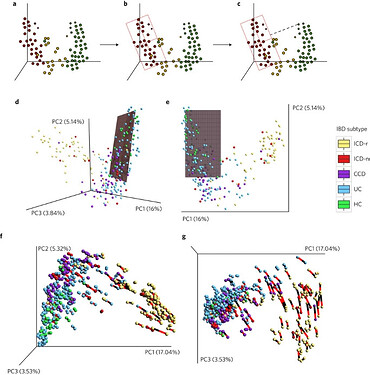 This 'healthy plane' method was built to put a number on a trend we saw, so it's not necessarily robust or directly translatable across studies. I remember us discussing other methods for scoring dysbiosis, including archetype analysis.

This is an interesting topic, and I would love to know if new metrics are being developed.

Thank you for bringing this question to the forums!

Thank you very much for your response. I have read the article...the idea of an "healthy plane" is interesting. Unfortunately, I could not find much more publications regarding a "general" dysbiosis index...However, i will keep on searching and will post any news here

Its interesting that this topic is coming up now, I was thinking about how "dysbiosis" has historically been defined as not!case, rather than by anything consistent. These are mostly thoughts, rather than any actual advice, so take them for what they are...

There's a "health index" developed by Gupta et al, (see q2-health-index for an implementation), however, it requires your data to be processed through Metaphlan2 for the database and assumptions to work.

Do you expect it to be consistent across all populations, or is this dependent on selection/situational factors like age, diet, location, medication use, or other things?

Essentially, I think you need to look into eubiosis as closely as you try to define dysbiosis.

@jwdebelius your comments about how to really define dysbiosis reminds me of the plugin q2-karenina... I have not ever tried it, maybe this would be relevant to your study, @Bonic ?

q2-karenina [Build Status] Approach q2-karenina in a QIIME2 plug-in for the karenina python package, which provides simulation and model-fitting tools for studying stochastic variability in microbial communities. The package is named for Anna Karenina Principle effects, in which certain diseases and environmental stressors can cause increased stochastic variability in animal microbiomes. A recent review of this phenomenon can be found in Zaneveld et al.,Nature Microbiology, 2017. This pattern i…