how to import these reads: Mixed-oriented or not?

Hi, I received an old multiplexed data set. I imported ,demultiplexed and denoised the reads. but classifying with sklearn-classifier didn't work The job was killed. As I read in several posts that Mixed oriented reads were a problem for sklearn, I looked back at my fastq-files and found in both 2.1-file ( which I renamed forward in importing) as in the 2.2-fastq-file, both the forward and reverse primer used.(marked in yellow) 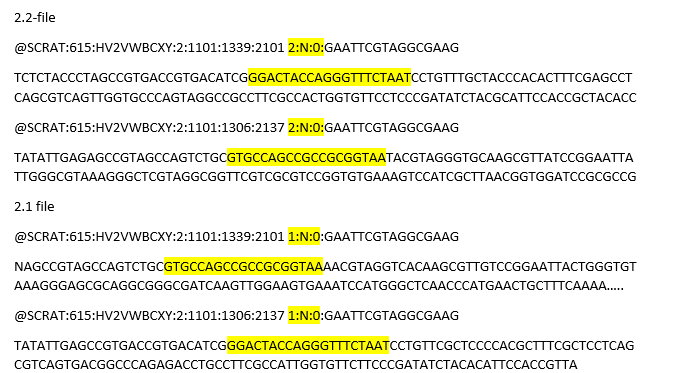 As I understood the 2:N:0 would indicate reverse reads and this is in the heading of all sequences in the 2.2 file But as you can see with both primers. When I tried to use Cutadapt with the -p-mixed-oriented flag : it responded that that could be used with dual-indexed reads. I was not aware that I had those?
So My first question is : Are these mixed oriented reads ?
and my second one is : What is the right way to process these?

should I use this first then?

Processing, filtering, and evaluating the SILVA database (and other reference sequence data) with RESCRIPt Tutorials

Please consider this tutorial a living document, which may change based upon community feedback and ongoing plugin development. RESCRIPt RESCRIPt (REference Sequence annotation and CuRatIon Pipeline) is a python package and QIIME 2 plugin for formatting, managing, and manipulating sequence reference databases. This package was designed for compiling, manipulating, and evaluating sequence reference databases from SILVA, NCBI, Greengenes, GTDB, and other sources, and for constru…

Processing, filtering, and evaluating the SILVA database (and other reference sequence data) with RESCRIPt

Orient sequences by alignment to reference

This was recommended by Mike in this post : Discarded results produced by q2-cutadapt's trim-paired when working with mixed-orientation reads

I'm not sure I have a perfect solution to this problem...

Are these reads in a random orientation, or is this a pair of R1 and R2 files that have been 'interleaved' so the one fastq file includes both the forward and reverse Illumina reads?

This should fix interleaved reads, but will not help with mixed orientation reads.

The big question here is 'how did my reads get like this,' which we have to answer before we can move on to 'how do I convert them back.'

Hi Colin, thx for your reply. I'm not sure if I can answer the question if these are interleaved or mixed orientation reads. This is what I know:
This is a dataset which was sequenced in 2017 on the Illumina HiSeq PE300 platform with V4 primers. As usual, all the people analysing at the time have moved on in science and are not available anymore. I got the files (4 libraries with each 2 files named 2.1 and 2.2) and a metafile containing 1 barcode per sample (the first 8 nucleotides of each read). These are fastq.files, but I deleted the lines with quality information in the post to get a better over view.
I really hope that this is enogh information to dissect which type of problem it is. 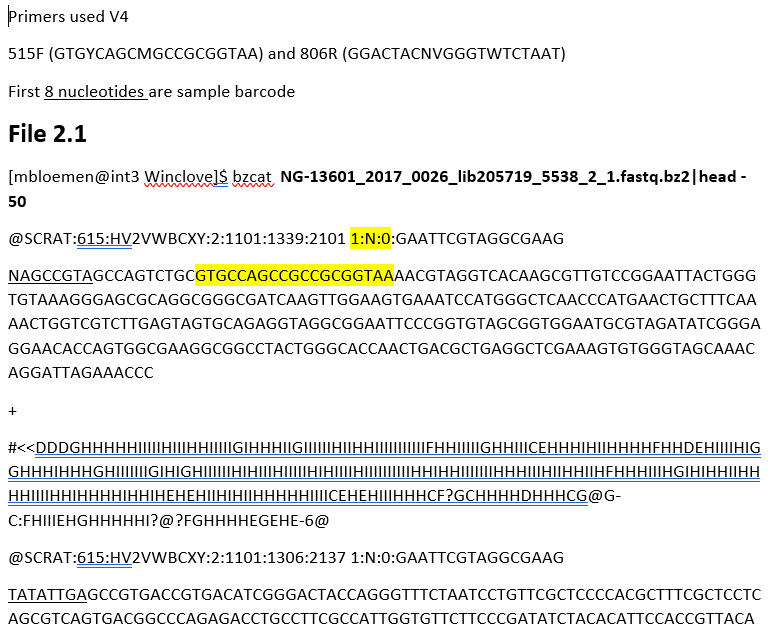 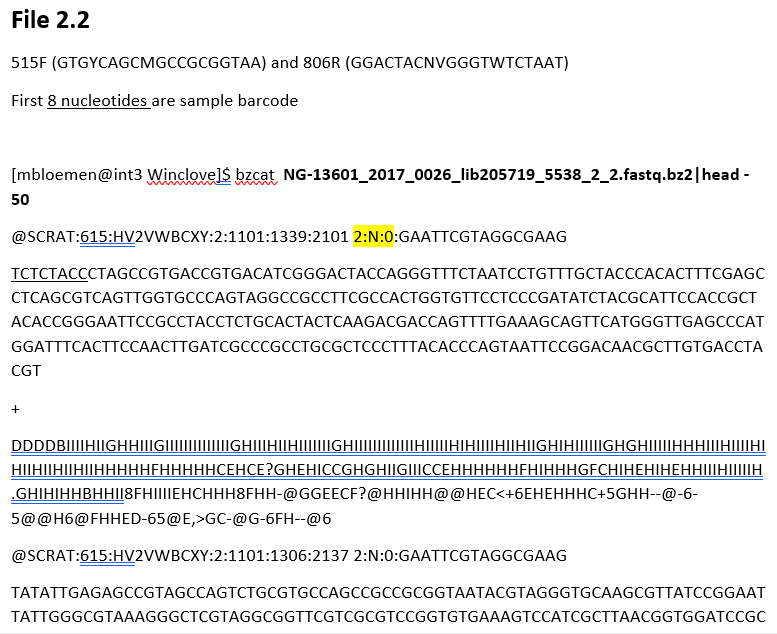 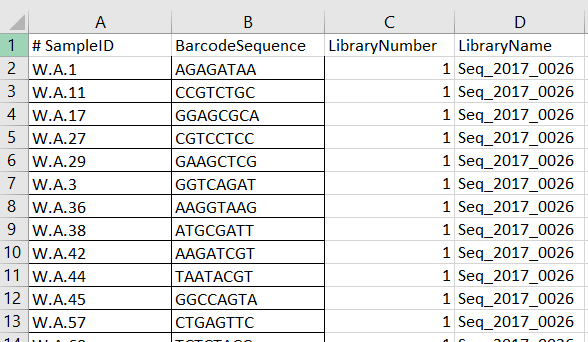 As usual, all the people analysing at the time have moved on in science and are not available anymore.

Classic. Good luck to them!

These are fastq.files, but I deleted the lines with quality information in the post to get a better over view.

Good, fastq files are the ideal input for our read repair tools. But I'm not sure that's needed.

When processing these reads, did you use DADA2 or vsearch or deblur? Where you able to get them to pair?

Maybe I'm getting ahead of myself. How did you import these demultiplexed reads into Qiime2?

I'm thinking the reads themselves may be fine, but there some other issue in the pipeline to resolve and I'm looking for clues! 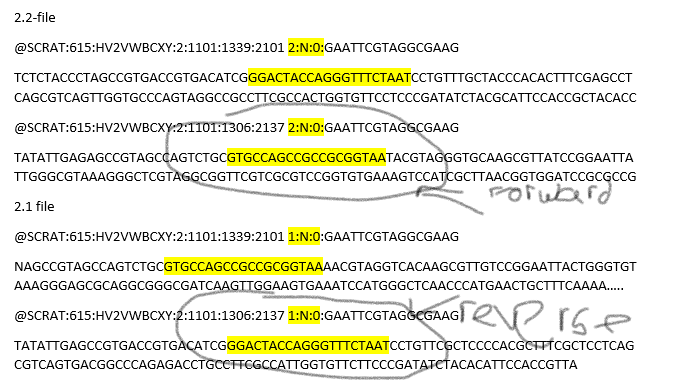 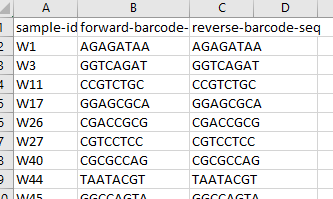 Yes, it's strange that both your 1:N:0 forward and 2:N:0 reverse reads include both the forward and reverse primers in them. This is what made me think these were 'interleaved' by some upstream program.

Given that you can't get the original BCL files and demultiplex again, my only idea would be to run that reformat.sh tool and see what it can produce.

I think I may be stumped! Have any other @moderators seen this before?

Hi @Wieneke, I think you can go ahead and import them as you normally would and then follow these two posts from the same thread.

@jessica.song, I forgot to mention, that you’ll still need to orient

this output into the same direction prior to any other downstream analyses. You can do this via the RESCRIPt action orient-seqs. -Good luck!

Let us know if this works.

Let us know if this works.

Thx a lot both for your help. I gonna try and report back.

Hi Mike, I was going to try your solution. But it is still not so clear to me. ( I'm not that experienced wit QIIME.

In the protocol described in the solution it seems demultiplexed reads are used.

But after importing my reads are still multiplexed. The demultiplexing is already the steps were things go wrong isn't it? Because is demux otherwise not only keeping the reads with the barcodes belonging to the forward files in the forward.fastq.gz file and vice versa in the reverse file ?

Is there a way that you can filter/ separate forward and reverse reads out based on the primers before the demultiplexing step? That has to be done without trimming then, otherwise you would lose the barcodes. But then again how do you know which forward and reverse read belong together as you then fiddle with the order of the reads?

Running the cutadapt command is only removing the primers from the sequences, not demultiplexing. Though cutadapt has some demultiplexing options. If those are not appropriate for your data, you can try this approach:

Hi @Danyl_McLauchlan, Great question. I know some folks with mixed-orientation barcoded reads use this tool to extract the barcodes and orient the reads prior to importing to QIIME 2 (possibly by doing two passes through this tool? I have not looked): https://github.com/najoshi/sabre However, since you have combinatorial dual-indexed reads that complicates matters, so I’m not sure if sabre will cover your needs but it’s worth a look. If any of the qiime1 virtual machines are still around, yo…