Hi everybody,
I have been working with greengens data base without problems with qimme2-2020.8 version. But when i use silva data base the run is killed. I have just dowload the data bases from the qiime 2 website so the scikit-learn version is fine. 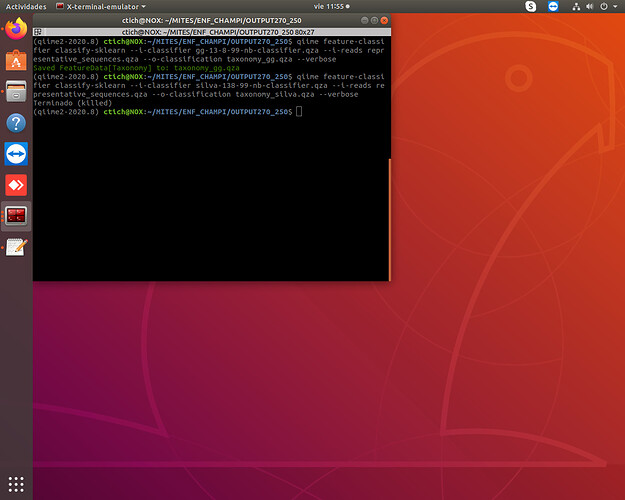 Any idea what i am doing wrong?

Nothing! Classifiers trained on SILVA have much higher memory demands than Greengenes, being a much larger database. See this post for troubleshooting advice:

Thank you Nicholas,
I thought there was another problem but you are right… i just have 16GB RAM…
Using the --p-reads-per-batch parameter doesn’t work either.
Is there any other option to run this with just 16GB RAM?
Thanks!

Are you using virtual box or some other virtual machine? If so, you need to allocate more memory to the virtual machine, it is usually quite low by default (e.g., 1GB RAM) and is often a root cause of this error.

Hi again,
I am not using a virtual box but a standard pc with Ubuntu.
Using --p-reads-per-batch 1000 it does not work, i will try with 2000.
How can I know the memory it has allocate for this?
Sorry for bothering you, i am lost with this IT techs…

do you have other programs running concurrently? Maybe you should check memory use on your computer to make sure nothing is running in the background that is eating up RAM.

I’m not sure what else to say! You may need to either settle with a smaller database like greengenes or find a more powerful computer to use the SILVA classifier.