All the samples I will be working with are from the same batch (all were processed and sequenced together) since Dada2 should be run independently on each batch.

The workflow consisted of the following steps:

I used this workflow to independently look at two different batches of samples (samples from different batches were not mixed) For the two batches, each sample was processed around 10 times with a different collection of other samples. 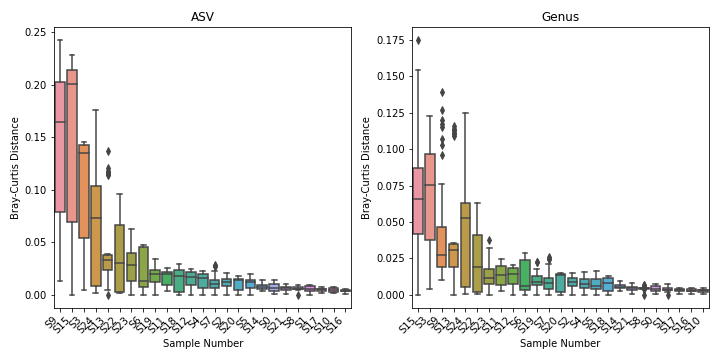 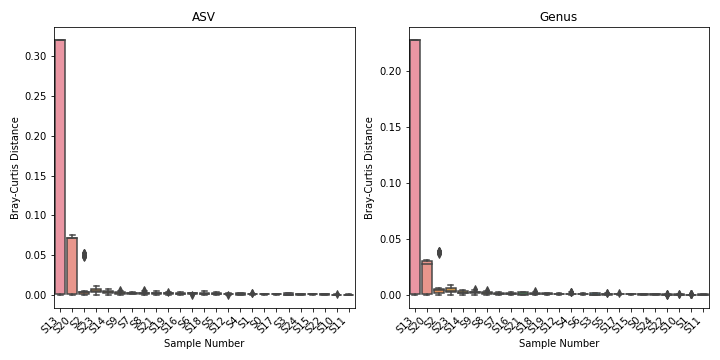 For batch 1, it is clear that the final counts for some samples were quite different depending on the collection of samples it was processed with. For batch 2, the effect was less drastic with only 2-3 samples displaying differences between processing groups.

Furthermore, the differences are a lot more prominent at the ASV level than the Genus level. This makes sense to me, as at higher taxonomy ranks we are going to start collapsing a lot of those finer details into the same groups.

My current reasoning for this effect has to do with the fact that Dada2 only learns the error rates for the first few samples that get it to 1e8 base pairs. In each of the processing groups, it is likely different samples being used to learn the error rates and therefore changing the denoised ASVs generated by Dada2.

Any insights or suggestions as to these results is greatly appreciated!

Hi @ryan4martin, welcome to the forum!

I have a couple of follow up questions if you wouldn't mind:

Not sure if any of these will actually completely resolve what you see here by themselves, but may be a starting point.

@Mehrbod_Estaki thanks for bringing up some interesting points! Here is what I have so far in response to your questions and comments:

"1. Are your DADA2 parameters identical across all these runs? Is this the q2-dada2 implementation or the stand alone R? Which version # are you using?"

"2. when you say ASVs here, are you referring to the direct output of DADA2, or the closed-reference OTUs after DADA2, because in your workflow you describe a clustering step after DADA2, but is unclear if that's just so you can collapse for the Genus plots or you used OTUs for the "ASV" plots as well. Also note that you can still collapse ASVs into Genus level without ever doing OTU clustering."

"DADA2 expects that you have removed all non-biological sequences from your reads first, this includes your primers (especially if they are degenerate). This is an important one that can add this kind of variation."

I am working on the other points you brought up and will post the results when I have them.

I've finally had some time to continue checkout the rest of points you mentioned and here is where I am at so far.

I checked the Bray-Curtis distance between the same sample processed in different batches like before with these variations. In the graph "Counts" refers to non-normalized values and "TSS" to the normalized values and "all features" uses all ASVs and "features in >10% samples" is the condition I used to remove rare features from the table before calculating the Bray-Curtis distance. The TSS normalization looks to increase the distance between samples but removing rare features as minimal effect. 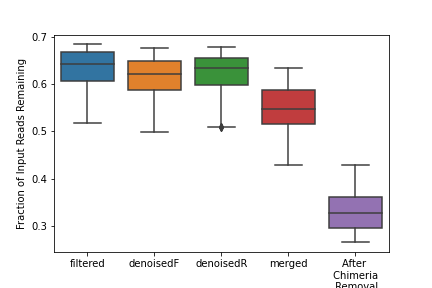 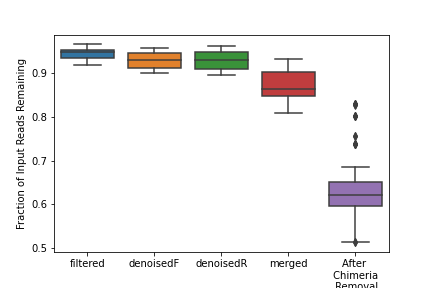 This looks like quite a few reads being lost to the chimera removal step. I have been looking into the minFoldParentOverAbundance parameter and think the next step is to try a few different values here and see if I retain more reads. Any other suggestions or insights are greatly appreciated!

Hi @ryan4martin ,
Thanks for the updated info and sorry about the slow response, I'm right in the middle of a big move so I'll follow up as soon as I can!

Hi @ryan4martin,
Thanks for the updates. 50% chimeras does seem a little excessive, but it also may be ok, depending on your samples. As in, that is not tally unheard of...
I'm not entirely sure what else to propose at the time being, so let's see what else the other experts think.
Is there anything biologically interesting about the handful of samples that seem to have the higher variance in the plot?