Using Qiime2 (qiime2/2018.4 on hpc), I am trying to import a feature table with the ASV frequencies per sample that I created using Dada2 on R. I used the following code to import the table into a qza file:

Then I attempted to use feature-classifier to match up the features with their taxonomic ID with the following:

I received the error message:

Plugin error from feature-classifier: Argument to parameter ‘reads’ is not a subtype of FeatureData[Sequence].

I know that my feature table is not in the FeatureData[Sequence] format and is in FeatureTable[Frequency] format. Any suggestions for a work around or a better way to match my features to taxonomy?

Hi @megguidry,
Welcome to the forum!

The issue here is that you also need to import the ASVs sequences output by r-dada2 as a FeatureData[Sequence] artifact.

This will be a FASTA file of your sequences. The feature table does not contain the necessary information for classify-sklearn to operate!

Give that a try and let us know if it helps!

Any suggestions for a work around or a better way to match my features to taxonomy?

No workarounds here. You have got to get the DNA sequences in order classify them. (But don’t worry because you can totally export them from R!)

Thanks for your reply! This is how my table exported from Dada2 looks: 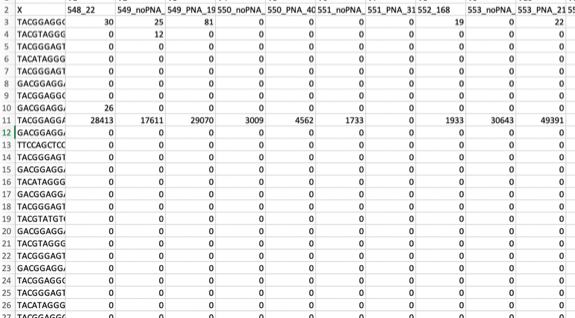 Do you have any suggestions on how to upload this data as a FeatureData[Sequence] or how to get that format type out of R-Dada2?

@megguidry,
You need to convert your dada2 ASV table to a fasta file containing the representative sequences.

@Mehrbod_Estaki provided the way to do this in R:

in the example below asvtab=DADA2 feature table