how to do the alpha and beta diversity and microbiota composition analysis ?

As @timanix has so accurately explained,

The graph on your screenshot is plotted outside of Qiime2 environment. You can use data from Qiime2 output (barplot.qzv file), but you will not be able to receive plots like this using only Qiime2. Authors of the article used R, Python or something else to draw this figure.

I will add to Timanix’s excellect adivce, and I can tell you based on the plotting style that it’s a ggplot figure, perhaps there’s someone at your institution who uses R who could help you make something similar. But, in any case, the figure was generated outside of qiime2. Some people like to publish with their qiime2 figures, others will generate them outside the pipeline. Its a personal, stylistic choice based on your coding ability and what you like aesthetically. If R isn’t your cup of tea and you’re not happy with the qiime graphs, you might consider another plotting software you’re more comfortable with.

Im a newer for microbiota analysis. And I am confused ASV and OTU. What is the difference between them?

You might want to check out some previous threads that have discussed this topic.

Hello - I would like to bring up a topic that has been discussed before (A quick clarification on clustering) and provide an example from my own analysis. I am looking at one particular taxonomic group within environmental samples of bacterial populations. The method of denoising is dada2, so I am assuming that OTU clustering was not necessary since sequencing errors are accounted for during the denoising process. However, this analysis resulted in many OTU’s being defined, some of them quite r…

This is a more general question. Now that we are switching completely to QIIME2, i did one comparison between 97% OTU clustering in QIIME 1 and 99% ESV clustering in QIIME 2/deblur. The dataset is a fairly standard MiSeq 2x250 bp run with >100 bp overlap. I compared two experiments by reads surviving the pipeline raw OTUs/ESVs identified by sample. I found that QIIME2 accepts more reads, while identifying much less ESVs than OTUs. This was surprising because i would expect that 99% clusteri…

Can I just say that it warms my heart to read this?

Thanks for you explaining patiently. I have known a little about the difference between OTU and ASV. But I am still stuck for how to analyze the dominated species or families in different groups?How to get the quantitiy of species or familes? From which data?
Thanks again for your kind help.

But I am still stuck for how to analyze the dominated species or families in different groups?How to get the quantitiy of species or familes? From which data?
Thanks again for your kind help.

First of all you should decide which tables you want. If ASVs, you can proceed with your tables. If with OTUs - cluster your tables with vsearch with 97% similarity
https://docs.qiime2.org/2020.2/tutorials/otu-clustering/
Next, from your screenshot, I can see, that you have 2 groups of data, and if I understood correctly, you want a figure as fig.4 for ‘yes’ and ‘no’ groups. But in your barplot, you have data for each sample, not group. So you need to group your table, in which you will have only two grouped samples, like in figure 4.
https://docs.qiime2.org/2020.2/plugins/available/feature-table/group/
When you will receive a barplot for this grouped tables, you will be able to see which taxonomy is dominating in your groups on any level you choose.
Now you will need to obtain relative abundances of ASVs or OTUs. So you can convert your grouped table to relative abundances table.
From here you will need to do some scripting, without Qiime2. You need to export relative table to .biom file, convert it to .tsv file, add taxonomy annotations, sort it by taxonomy and relative abundances and select any number of most abundant ASVs or OTUs for each taxonomy you want.
Basically, it is what you need to plot something like this. But, I need to warn you, that what I wrote, is just my opinion, it is how I would try to get this picture, and I can be wrong.
As @jwdebelius explained, the plots were created in R using ggplot. But you can use something else, if you know how to do it (matplolib in Python, for example). It will not be easy to plot.

Thanks for your kind help. I have known more about ASV and OTU from your reply. I proceeded according to Moving Pictures tutorial and used DADA2 to sequence quality control. Now I used the following commands to generate the grouped tables. Is it right?
qiime feature-table group
–i-table table-dada2.qza
–p-axis sample
–m-metadata-file sample-metadata.tsv
–m-metadata-column trea-line
–p-mode sum
–o-grouped-table grouped-table.qza
–verbose

Then I used the following commands to generate bar-plots, but it failed. How to use the grouped tables to taxonomy analysis? I am still confused. Thanks for your kind help again.

You summarized frequencies from all samples in group - is it by purpose? I would recommend to redo it with

mean-ceiling will take the ceiling of the mean of these frequencies;

median-ceiling will take the ceiling of the median of these frequencies.

Then I used the following commands to generate bar-plots, but it failed.

Last time I run this command for cllapsed tables I encountered an error as well. It was solved by creating a new metadata file, in which I had only groups instead of samples id’s.
So, if you have only two groups, your new metadata file should contain only two ‘samples’ - your groups.

Thanks again. I am more confused the grouped talbes.And I do not know how to do next. My purpose is to get the dominated species or families in different groups. In fact, There is 4 groups in the sample metadata files.

So you need to create a table, grouped by this 4 groups, and create a new matadata for barplots with those 4 groups insread of sample ID’s.

Here is my metadata 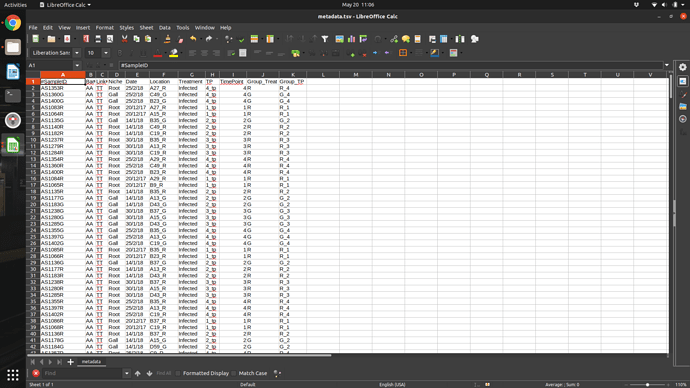 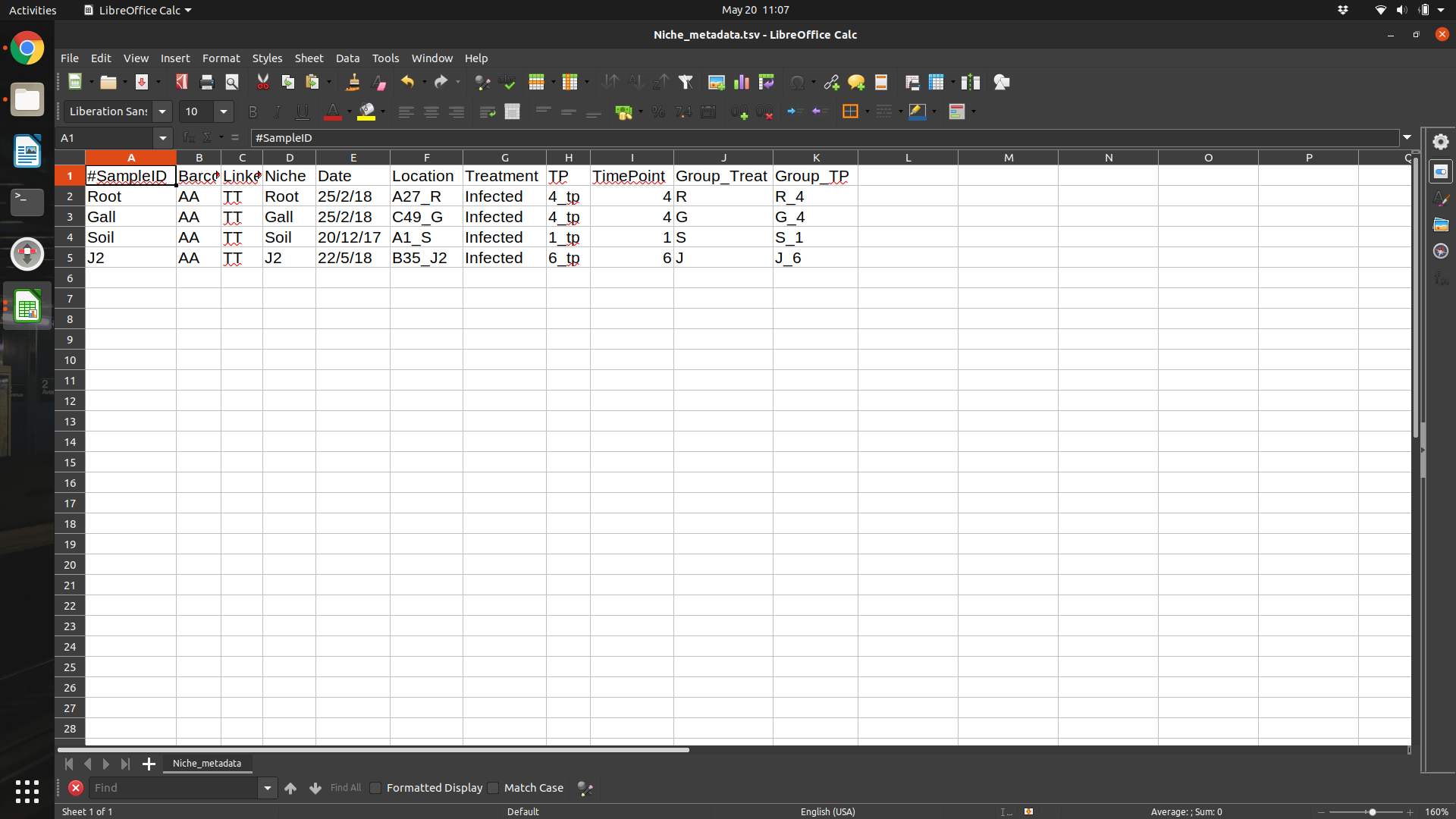 I am not still understand the new metadata file. The “Root” group included many samples(rows) in the first file,but there was one row in your second file. How to convert?

You already converted them in your grouped tables. All you need from this new metadata - groups in the sample ID column. You don’t need this new metadata for anything else. The only purpose - to receive a barplots with groups instead of samples

Thanks for you explanation

. I edited a new metadata file(groups in the sample ID column). And I used the following commands to generate the taxa plots. 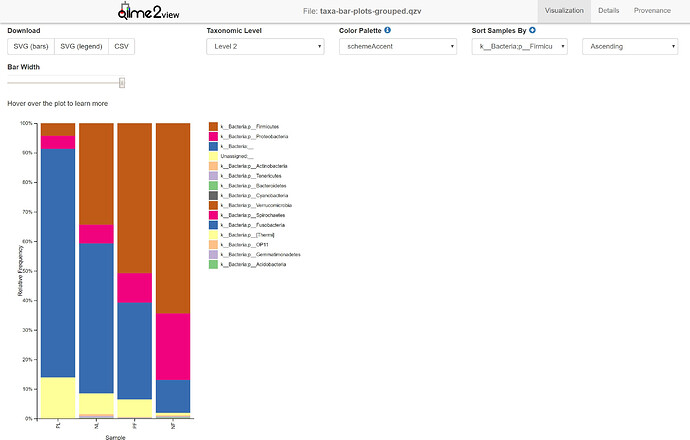 The .csv file(level 2) is as follows. But I do not know the meaning of the number in the table, is it the number of bacterial?

But I do not know the meaning of the number in the table, is it the number of bacterial?

It is a mean frequency of feature on chosen taxonomy level among all samples in the group.

So the bar length in the taxa plot is generated using these frequancy of feature in the .csv file?

Yes, but pay attention that it was automatically converted to relative abundances instead of frequencies

Can I use these frequancy of feature to get the plots (like the above Figure 4) using R or Python?

Yes, but you need to normalize the data among each group, so ferqencies will be converted to relative abundances

But I found the number of “k__Bacteria;__” is not consistent with the bar length in the taxa plot.

I suppose that you are looking into frequencies in the table. On the plot, it look incorrect just because it is showing relative abundances - as a portion of a feature regarding the frequencies of all features in the sample / group, not the frequency itself.
Not you have this data, but you still need to get most abundant ASVs as I was describing in one of the comments above.

Sorry, I could not clear to ask question. My question is that the two following graph is not consistent in the frequency. 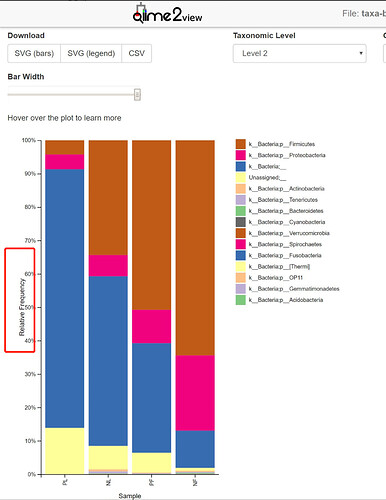 The second question is that how to get the abundant ASVs. I used dada2. But I am still confused after reading your former comments and checking the results from dada2.

Sorry, I could not clear to ask question. My question is that the two following graph is not consistent in the frequency.

The second question is that how to get the abundant ASVs. I used dada2. But I am still confused after reading your former comments and checking the results from dada2.

There is no tutorial for this part, you should do it by your own. I just described major steps, which, in my opinion, you need to implement to get this graphs you provided. But I never did it by my own. All I can say - it will require some scripting.

Thanks for you so much. I read your comment again: " You need to export relative table to .biom file, convert it to .tsv file, add taxonomy annotations, sort it by taxonomy and relative abundances and select any number of most abundant ASVs or OTUs for each taxonomy you want."
But where can I get the relative table? From table-dada2.qza?

Hi!
Check out this plugin
https://docs.qiime2.org/2020.2/plugins/available/feature-table/relative-frequency/