FeatureTable[Frequency] with taxonomy names rather than codes

Good morning to everyone,
I’d like to obtain a FeatureTable[Frequency] object (like the one obtained from dada2 denoise-paired) with actual taxonomy identification rather than a self-assigned name made up of a sequence of numbers and letters (like the one below). 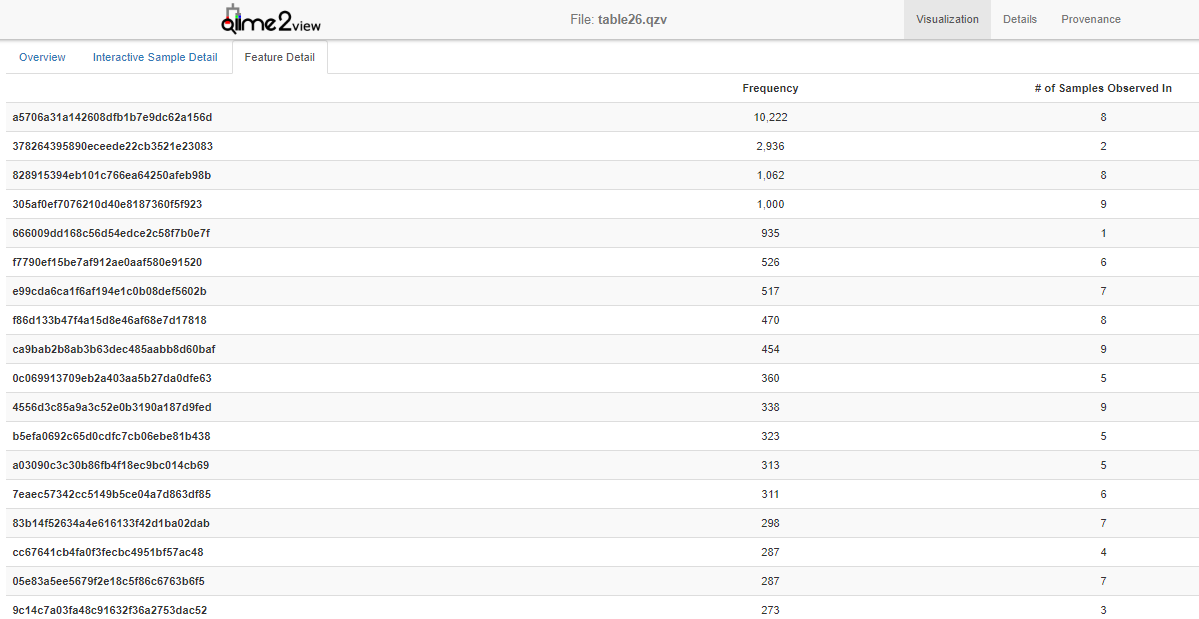 Of course, at this step of the analysis, taxonomic identification hasn’t been performed yet, but it is done later, and I’m not sure how to obtain such table…

I’ve already checked out this previous thread and had already tried it as a part my pipeline, but I’d like to obtain a full file, without performing collapsing through qiime taxa collapse at any taxonomic level.

This would make the results of any further analysis definitely more readable, without having to group my taxa at a specified level (but having a general overview of how my taxa behave instead).

I’ve noticed the plugin qiime taxa barplot outputs a plot showing taxa rather than the previously mentioned codes, requiring a previously created taxonomy.qza file as input, but other plugins I used (like qiime taxa filter-table to remove mitochondrial and chloroplastic contaminant reads from my features) will just use taxonomy to perform filtering, still outputting a FeatureTable[Frequency] containing the codes.

In particular, I’d be interested in obtaining such table, free from contaminants, showing taxonomies rather than codes.

Is there any easy way to perform this, starting from the filtered table obtained from qiime taxa filter-table and the taxonomy.qza file resulting from qiime feature-classifier classify-sklearn?

There are a lot of parts to this request. Let’s take them one at a time.

Getting that full FeatureTable[Frequency] table with taxonomy names (instead of ASV IDs) could be done by exporting or extracting your qva file. This can be a bit tricky, but it should give you both the table with counts, and ASV names, and taxonomy names.

Do that filtering with qiime taxa filter-table first, then export / extract your table.

Let me know how this works for you!
Colin

Good afternoon, and thanks for your reply!

I’ve tried both but apparently I obtained a .biom file in both cases.
What should I do with it?

Moreover, if I try to visualize the original filtered table (as follows), I still obtain ASV codes, so I guess I have to use somehow the taxonomy file too while exporting/extracting?.

You could convert the .biom table to a tsv file, if you wanted.
biom convert -i table.biom -o table.from_biom_w_taxonomy.txt --to-tsv --header-key taxonomy

so I guess I have to use somehow the taxonomy file too while exporting/extracting?.

Thank you, I’ll try this!

Merge through a QIIME plugin or something else?

Merge through a QIIME plugin or something else?

Something else. Say the biom-format package, R, Python, or a spreadsheet program like Excel or Google Sheets.
Both the tables will have the same ASVs IDs, so you can merge on this shared column.

biom-format package, R, Python, or a spreadsheet program like Excel or Google Sheets.
Both the tables will have the same ASVs IDs, so you can merge on this sh

I guessed something similar, and then re-importing them from .tsv to .biom again, and from .biom to .qza ?

I tried to convert a .txt to .biom through biom convert but got this.

I guess this means that different ASVs could be associated to the same taxonomical identification.

And that I have to sum the abundances for taxonomies showing the same names and collpase such duplicate rows into just one before providing the txt to biom.exception again?

I checked on Excel and there were duplicate rows (same taxonomy).

I guess this means that different ASVs could be associated to the same taxonomical identification.

That’s right.
Now you can choose several options, for example:

I do a few parses for having a table with counts and taxonomy assigned to each feature. As Timanix mentioned, I also like working with this table rather than a collapsed taxonomy table because there's lots of taxonomies assigned to more than one feature.
That's what I do:

the viz.qzv has hash ids, DNA sequence and a taxonomy assigned to it, but still lack frequency per sample. So let's create a file from a few parses having all of it.

Opening your table-feature-counts-per-sample.tsv in Excel you'll find it:

@Sparkle @lca123,
Here is a tutorial that I think would generate an OTU table text file of the style @lca123 uses, but in what I think is a more streamlined way:

If you want sequence data in the table (as @lca123 has), you can follow the taxonomy annotation steps a second time, but with the representative sequences file.

I hope this helps.