I’m trying to filter out sequence variants present in my extraction (-) and PCR (-) from the rest of my dataset. I noticed similar posts in this forum and I’ve gone through them to see if any of the recommended fixes worked for me. So far they haven’t, but maybe I missed something obvious.

I’ve attempted to filter my data in two ways:

And I get this error:
Plugin error from feature-table:
All IDs were filtered out of the Metadata, resulting in an empty Metadata object.

Thanks for the help!
Kelly

Thank you for the update Kelly,

Just for reference, here is one of the previous conversations about using positive and negative controls.

Hello Everyone, I have been trying to determine the best way to filter my stream biofilms eDNA samples. I have negative extraction controls and PCR controls that I included in my library prep. There seems to be a lot of debate over the best way to remove features found in control samples. I agree removing any feature found in a control could be biased but I also don’t feel comfortable ignoring features completely that are found in my controls. Should we be filtering control features that repres…

Thanks for pointing out that thread. I’ll go ahead and ID the sequence variants in my (-) controls and filter them out using filter-seqs.

After classifying the sequence variants in my dataset and creating a list of taxa that I believe are contaminants, I am still running into difficulty eliminating certain taxa.

Namely, I cannot filter out taxa that don’t have genus or species identified:

However, when I reclassify rep-seqs-final_filtered.qza and then build the taxa barplot, “k__Bacteria; p__Bacteroidetes; __; __; __; __” is still present in the data.

Is there another way to filter out these less specifically identified taxa that I think are contaminants?
Thanks,
Kelly

If you were to run qiime metadata tabulate on taxonomy_unfiltered.qza do you still see the offending entry? I suspect it will look like this instead: k__Bacteria;p__Bacteroidetes

However if you saw k__Bacteria;p__Bacteroidetes;c__;o__;f__;g__ (with the prefixes) then that would mean there’s a un-named Greengenes OTU with that taxonomic resolution.

Also, unrelated to what I think is happening, there’s another issue with your command.
If we compare your search string to the list we see that they are not exactly the same:

In particular it looks like your query has spaces in it which the computer considers as different.

If I’m remembering correctly about the behavior of taxa barplot your --p-exclude should look more like:
--p-exclude 'k__Bacteria;p__Bacteroidetes'.

Thanks so much @ebolyen! I tabulated the taxonomy_unfiltered and copied the taxon ID directly from the metadata. After I did this, the targeted taxa were removed from the dataset. Thanks so much for pointing that out.

As a suggestion, it might be helpful to allow people to filter based on feature ID when using --p-mode exact. These don’t suffer from minor variations in the way they are presented, like presence/absences of spaces. This may already be implemented?

Thanks so much @ebolyen! I tabulated the taxonomy_unfiltered and copied the taxon ID directly from the metadata. After I did this, the targeted taxa were removed from the dataset. Thanks so much for pointing that out.

As a suggestion, it might be helpful to allow people to filter based on feature ID when using --p-mode exact. These don’t suffer from minor variations in the way they are presented, like presence/absences of spaces. This may already be implemented?

It sure is! That was actually our first form of filtering: qiime feature-table filter-seqs (granted feature-table might not be the first place one would look for this). There’s other filtering operations in q2-feature-table as well which are based on IDs.

Hello everyone, here is a little script to show how you can use the "p-mode exact" to show the micro-organisms that are resolved:
1.) only at the kingdom level
2.) at the family level 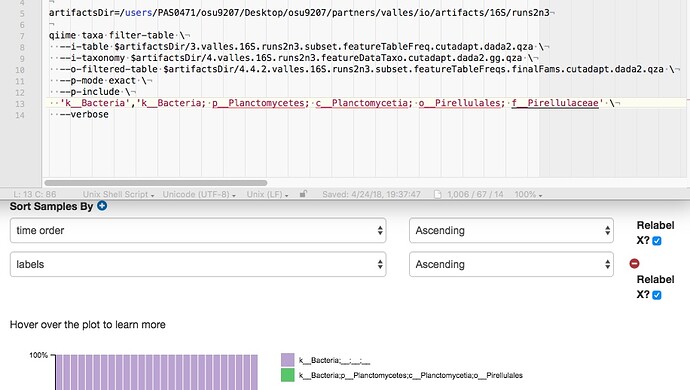 I ran into a problem again, and if you have already done this, you probably went through the same steps that I did, and then realized you were maybe going down a rabbit hole : )
I need to have an “p-mode exact” search for the ‘k__Bacteria’, but also have the ‘p-mode contains’ for all the other taxons! I am a little stuck! Do I have to use the “qiime feature-table filter-features” instead and create several tables that I will then merge into one? It really is getting complicated. Is there an easier way, and I am just missing the boat!?

Is there an easier way, and I am just missing the boat!?

Hopefully we can help you out!

Hidden away at the end of this section of the Filtering data tutorial is this little hint:

If your filtering query is more complex than those supported through qiime taxa filter-table, you should use qiime feature-table filter-features.

Sounds like you are a perfect candidate for this, since your query is becoming a bit complex now, and feature-table filter-features supports SQL-based queries, which are super powerful!

So, let’s rewrite you command to work with this:

Hope that helps! Let us know how it goes!