I am struggling to understand and interpret my demux summary data from an Illumina NextSeq run (picture below). Is it saying that there is no data from 0 to about 60 bases, therefore, I should set my dada2 denoise-paired parameter --p-trim-left-f to about 60 or 70? How come I hardly see any boxes in the box and whiskers plots? Is that a bad thing? 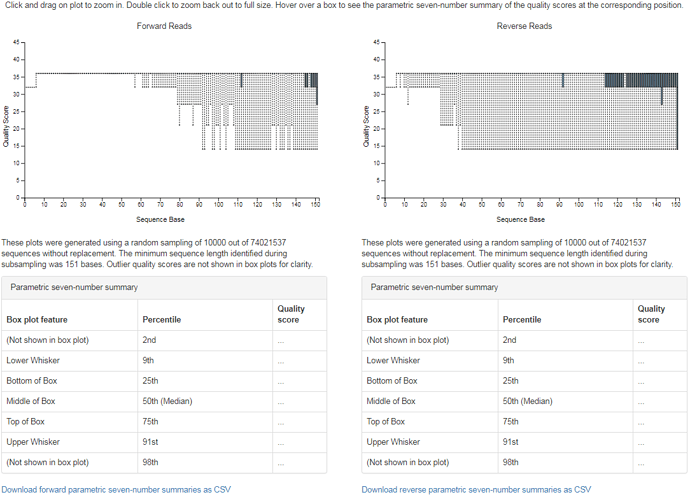 Not quite! It is saying that "of the sequences subsampled for the this visualization, positions 0 to 60 had no variation in the quality score - they were all identical." It looks like after the first 6 or 7 nts, the quality score is exactly 31 or 32 (you can confirm by hovering over a "box" there, the table below will update with the relevant distribution).

How come I hardly see any boxes in the box and whiskers plots?

Hopefully what I wrote above helps explain that. As the viz mentions above, you can click and drag to zoom in on an area of interest, too.

Is that a bad thing?

Not necessarily, although these profiles in general look suspicious to me - we normally see much more variation in quality scores in "unadulterated" Illumina reads. If I had to guess, I would assume that some form of quality filtering was applied prior to this step. If that was the case, then using a tool like DADA2 might not make the most sense for you, since that method works best with the "rawest" data, to generate its own error profile.

Thank you for your quick response @thermokarst.

The only thing done prior to importing was demultiplexing using bcl2fastq.

I tried running dada2 denoise-paired on the data anyway and got the following:

Several questions come to mind based on the dada2 outputs:

The only thing done prior to importing was demultiplexing using bcl2fastq.

Hmm, I would bet my bottom dollar that these reads were modified prior to generating the demux summarize viz. They aren't from Mr. DNA, are they?

Several questions come to mind based on the dada2 outputs:

Have you had a chance to review any of the DADA2 documentation? I believe all of these questions are covered there. Thanks!

These data were generated with our in-house NextSeq machine. I took the raw data and ran it using the following bcl2fastq:

From there, I renamed the files so that they were all casava1.8 format compatible… Would it have mattered if I did

I’ll have to re-read the DADA2 documentation again more carefully. Thanks!