Why do I loose 36.8% of reads while using PEAR for merging?

Your read quality looks good on this run! Without more debug details from the program itself I'm not sure what's going on...

Does PEAR tell you why these reads were discarded? If not, it may be worth trying to join with vsearch, as it give you more details about which reads fail to join and why, so you can know what settings would change your results.

Thank you, Colin, I will try VSEARCH as you suggested.

Hello @colinbrislawn
Another question: If you take a look at the Perbase sequence content, the runs fails for this, due to sequence-specific bias. ****(1)What could be the reason for this? is it because of the 16S sequence variation of the bacterial community in the sample been analyzed or due to the presence of overrepresented sequences?. (2) is there a way to correct for this before downstream analysis? Thank you

This is not totally unexpected for amplicons, compared to untargeted transcriptomics, as amplicons are all from the same part of the same gene so conserved regions with the same bases are expected. While these reads may be genuine, this can still cause problems for the Illumina sequencing platform, which is why PhiX is added to the libraries prior to sequencing.

Can you post the results that fastqc shows for perbase sequence content so I can take a look? 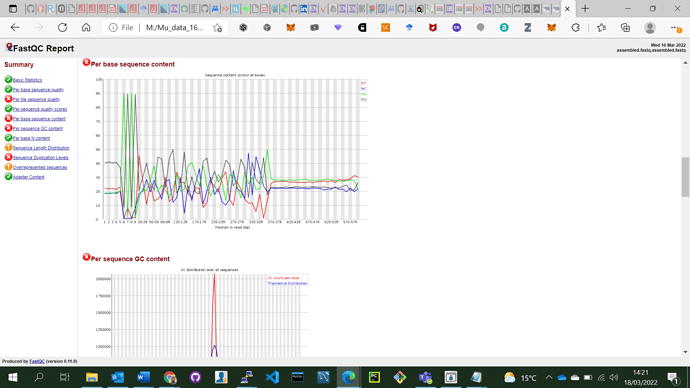 Looks like the big spike in uniformity is around base pairs 6 through 9, which could be the padding sequence or the linker before the primer. That's pretty normal for an amplicon.

Are you running this on your joined reads, or your unjoined paired-end reads?

This is for my joined reads @colinbrislawn . 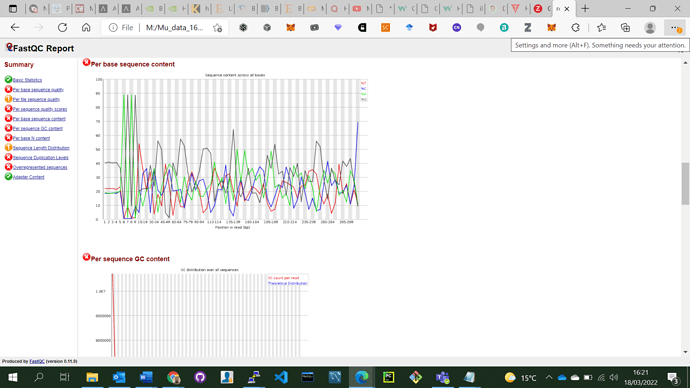 Got it! Yeah, those look pretty typical for amplicons. I do notice that the variance goes does at the end of your first read...

What region are you amplifying in this data set, and how large is it?

The V1 region with an expected amplicon size of about 300-350bp.

I think we spoke about this before... but I want to make sure we are discussing the same thing.

Figure 3 of this paper shows V1 to be pretty small.

How are you calculating the 300-350 as the length of V1? What primers did you use to amplify your target region?

OK, that makes sense to me! Thank you for confirming the region sequenced and the expected length.

What was the length of the Illumina kit used to sequence these? Based on these graphs, I'm guessing 250 paired (500 cycle chemistry), but you can confirm this with the sequencing core.

I ask because this will let us calculate expected overlap, and help explain why some of these 'joined' reads end up being 579 bp long.

We know that PEAR is having trouble joining these reads, resulting in lengths of 500+ bp long, instead of the 300-350bp we expect. This is a common result of the joining algorithm overlapping just the very ends of long reads, instead of overlapping the correct region sequenced.

Thank you for sticking with me while we investigate this. We are making good progress!

demux-joined.qzv (302.6 KB)
Hello @colinbrislawn see attached the merging report from vsearch. there is a difference of about 2million sequence in total compared with the merging using pear.

OK! So vsearch is doing a little better, but still not making enough overlap.

Could you re-run with --verbose then attach that log? It should give us more clues about how joining is working. The log will look like this:

Then we can start playing with the vsearch settings to give us the correct overlap. See --p-minovlen in the vsearch join-pairs docs. 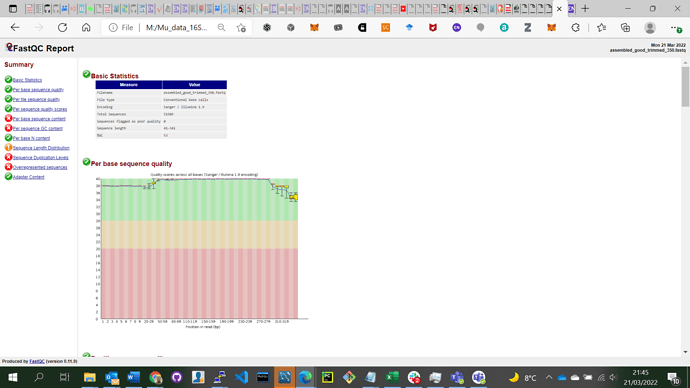 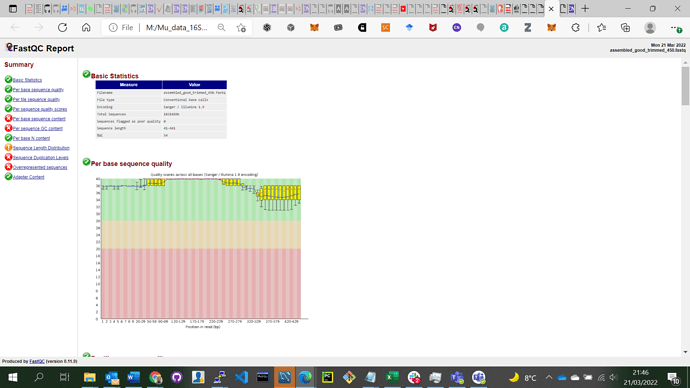 Yes, that quality looks pretty good. You can continue on to analysis, if you would like. I think 50,000 reads per sample is quite good for depth. 50k reads for a full projects is a little small, but could be OK depending on the expected community diversity and coverage needed.

I would still recommend you try to get joining working with qiime vsearch join-pairs or another plugin within Qiime2. This will mean all your results will have full provenance recorded inside the artefact files, so you can see exactly what is going on. I can also help you optimize your vsearch joining settings, if you would like.

No sequences passed the filter. It is possible the trim_length (400) may exceed the longest sequence, that all of the sequences are artifacts like PhiX or adapter, or that the positive reference used is not representative of the data being denoised.

The deblur command used was:

Let's take a look at this step:

Add the --verbose setting, and rerun that step, and post the new data --verbose provides. That will give us more diagnostic data about how well joining worked, as shown in the example data I posted.

We can also look at the quality of the joinined reads using FastQC or qiime demux summarize, but that vsearch log will give us the best clues!