Hello Qiime2 team,
I would like to suggest the following modification in order to improve the usability of q2studio.

Most (if not all) tuturials in qiime2 can be followed using the c2cli interface. Although many steps can be also executed using q2studio, the corresponding option cannot be found easily in the graphical user interface. I have attached a screenshot where I tried to run the command 'qiime feature-table tabulate-seqs' in the GUI; the corresponding selection would be 'feature-table' (this is easy!) and then 'view sequence associated with each feature' (which I fould out only after trying all the available options). In the opening window, the explanation is given under the title ('Generate tabular view of ...') which is identical what I got in q2cli with 'qiime feature-table tabulate-seqs --help' (see screenshot). Only then I was sure to have started the correct command via q2studio.

While the 1st-level command list section 'Available Plugins' is self-explanatory as it uses the same wording as in the q2cli interface, the next layer does not show the corresponding 2nd-level commands. I would suggest to add the commands to the description in this section, e.g. "tabulate-seqs - View sequence associated with each feature" (or in any other format) to allow users to recognize the corresponding 2nd-level command and to be able to transfer analysis steps from the q2cli tutorials more easily to q2studio interface.

Nevertheless, thanks to the qiime2 team for the great work they have done so far! 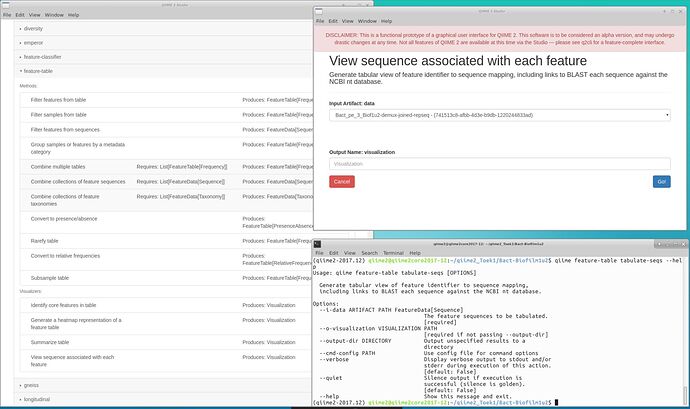 Hi @arwqiime! The addition of QIIME 2 action names in q2studio would be really helpful. I created an issue to track progress on this feature. We’ll follow up here when it’s available in a release (I can’t provide an ETA at this time). Thanks!