problem with merging step in qiime2 with dada2

My problem is that i am losing a lot of data in the merging step.

I used the following command:

This was my results: 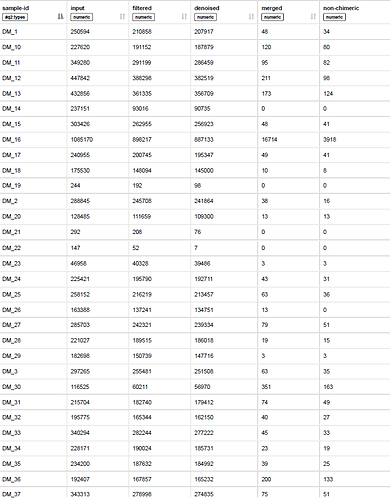 Do you think that i should change my parameters? Thanks

Welcome to the forum!

There are two approaches you could take here. First, it looks like your 2x220 bp reads are too short to allow for overlap. So, you could try using longer reads. It looks like you have some issues with the boxplots partway through, but you might do okay if you go longer.

Your other option would be to work with the forward reads alone, since you can’t get the reads to merge the way you’d like to. While less popular, this is definitely a valid option. You lose some of the specificity that you get from the longer reads, but you have reads to work with.

Thank you so much for your reply. It is ok if i truncate longer than 220? I am afraid to retain a lot of reads with bad quality.

Yes, foward reads could be an option.

By default DADA2 is going to need ~20 bases of overlap as well. This v3-v4 distribution makes it look like you don’t have a lot of headroom. If we account for the overlap, and assume perfect reads, the best length you would get is 480, which is right at a peak of length variation for this amplicon. I’m not sure it’s possible to overlap these without biasing the results, even if the noise isn’t a problem (which it will be).

I would go with @jwdebelius’s second option personally.