Phyloseq graph using Q2 ASV code : how to get the real Phylum or Genus name?

I have used Q2 a lot lately and I want to use some features of Phyloseq illustration in R now but I have very often a problem with the code names used by Q2 that looks like "2ec862esddlr88965a8855d665er2245" which is not helping for the analysis.
I am wondering whether during my exportation of Q2 object to Phyloseq object I can do something about it so I won't get these ugly name ;-)!

This codes for instance: 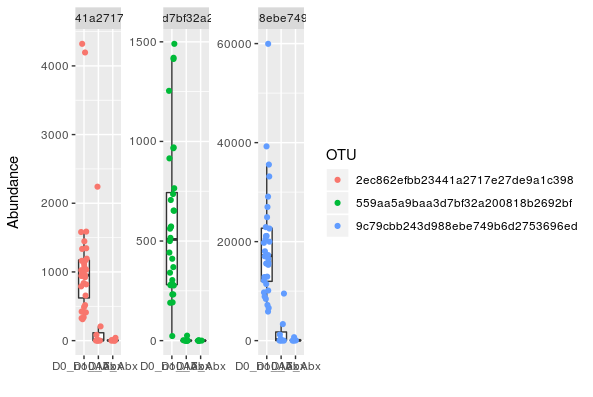 That will tell us all the columns of the R data.frame(), and one of those columns should be an informative taxonomy name like Phylum, and we can pass that column name to ggplot.

I think we are really close to solving it…

P.S. I’ve put your code inside of a code block. They’re cool

So here is the output

So yes there is indeed the “Phylum” column… but sorry I don’t know how to put the right wording to replace the “ugly” name by the phylum in the figure !!!

Thank you for your help.

Ok ok ! I am back… your suggestion was enough to put me on the right track!
I feel ashamed that I did not think about that

I just have to change OTU for Phylum… da!
Many thanks Colin !

Here is the code modified:

Here’s how ggplot works:
ggplot maps metadata columns, to aesthetics using the aes() function.
Note that Group_Timepoint, Abundance, and OTU are all columns in your dataframe.

But you can map these out any way that you want! Try this

So basically I’ve replaced OTU with Phylum, so that it uses the data in the other column.

Why are the sizes different?

Did you notice I snuck in size = Abundance to the aes() function? You should probably take that out… but you can also edit the other settings too!

Great Colin!
“size = Abundance” is a nice touch! I’ll keep it.
Many thanks for your efficiency!

I have a tiny little question… what would I have to do if I want to show only one Phylum like “D_1_Proteobacteria”?

Well got my answer alone… (it was too late yesterday

Glad you found the answer!

All the packages in the Tidyverse have a ‘Right Way’

to do stuff like this, and it uses filter() instead of subset():

But you can do what you want!