observed OTUs and number of reads

Is there any rule such as "that the observed OTUs are correlated with the total read count" i.e, more observed OTUs/ASVs with more reads?

For instance, from the tutorial by Nicholas ggplot shows a clear positive correlation, however, I wonder if this trend is the same with every dataset. My dataset suggests another way around 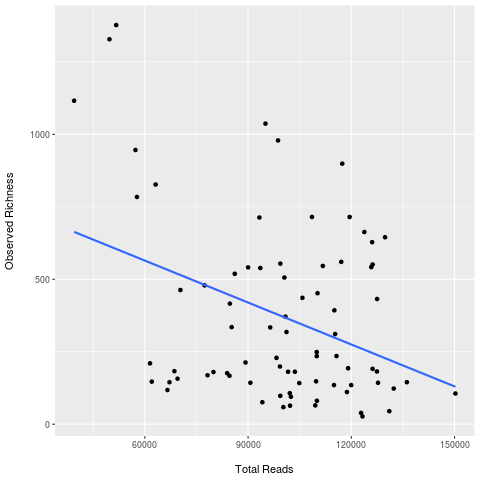 Is there any rule such as “that the observed OTUs are correlated with the total read count” i.e, more observed OTUs/ASVs with more reads?

generally yes there is a positive correlation between sequencing depth and # of unique sequences (hence why rarefying or other normalization is required prior to comparing samples), but this relationship is not an absolute rule (since the # of uniques depends on characteristics of the samples, not sequencing depth alone).

There is indeed a kind of positive correlation.
It is like: if you have too few reads, you are less likely to capture all species present, and you are likely capturing less species.
If you turn this rule around, you will find that the more reads you have, the more likely it is that you will capture all species present. But not more than those. So if you increase the read number, then after a certain number you should not be able to see more species/ASVs/OTUs then those present in the sample.
Hence the alpha diversity rarefaction plot (that mimics the various depths of sequencing) goes to saturation. Beyond that point there is not such relationship as even if you double your sequencing depth you will not find new OTUs. You have already seen all that were there.

Thanks for your reply

Your data look suspicious in that regard… was the x-axis flipped???

No, the x-axis was not flipped. I used the following code

But the relationship you are seeing is not impossible ,

Okay that makes sense, though the share of your plot is still quite surprising. Maybe you should color the plot by species to see if the high-abundance species have the lower read depth, just to confirm your assumption here.