ESV vs OTU deflation (QIIME1 vs 2)

This is a more general question. Now that we are switching completely to QIIME2, i did one comparison between 97% OTU clustering in QIIME 1 and 99% ESV clustering in QIIME 2/deblur.
The dataset is a fairly standard MiSeq 2x250 bp run with >100 bp overlap.
I compared two experiments by

I found that QIIME2 accepts more reads, while identifying much less ESVs than OTUs. This was surprising because i would expect that 99% clustering would increase diversity over 97% thresholds. 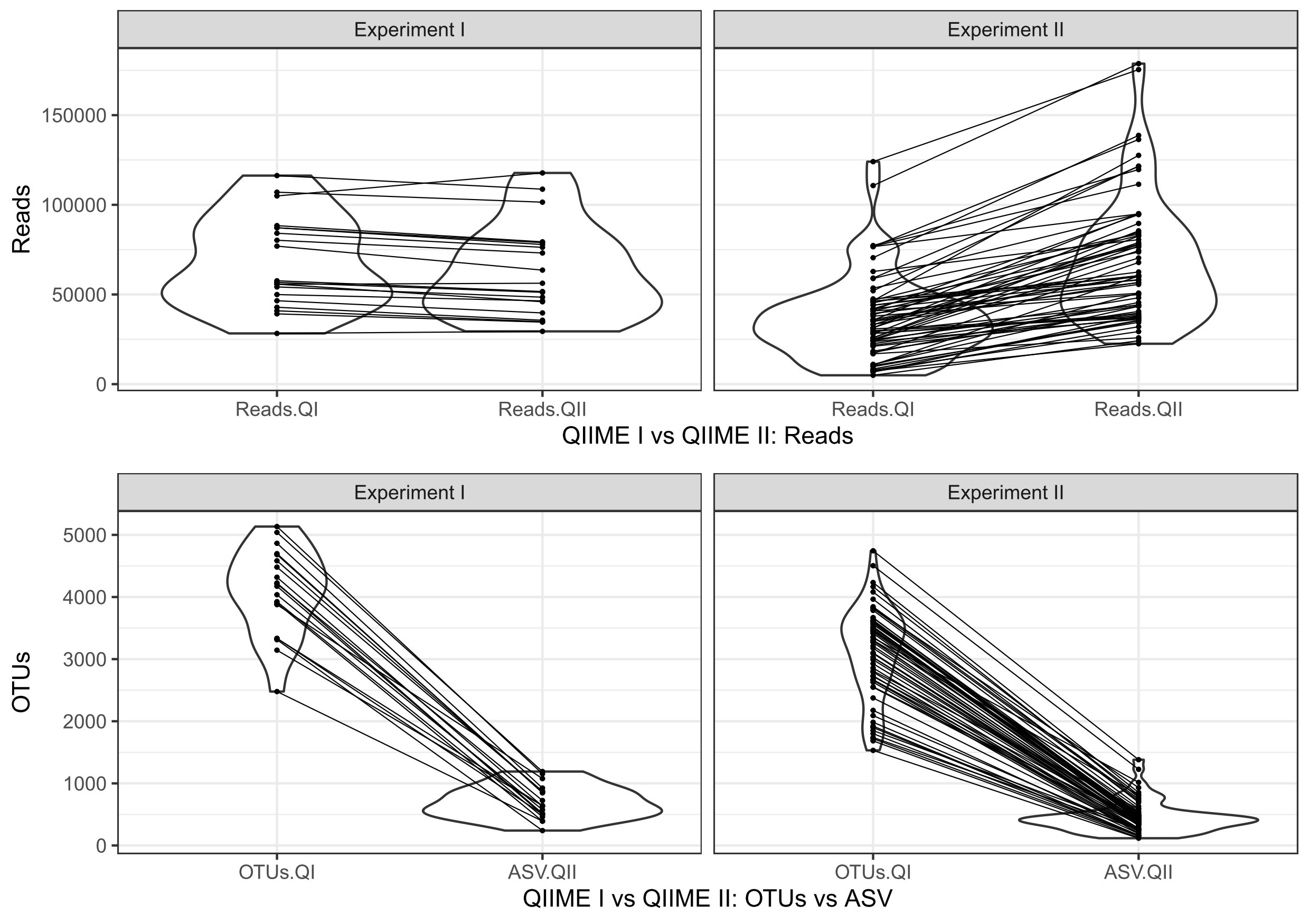 There was also a good, but not a perfect correlation between OTUs and ESVs identified, meaning that the causes for the diversity deflation do not apply in the same way all the time. 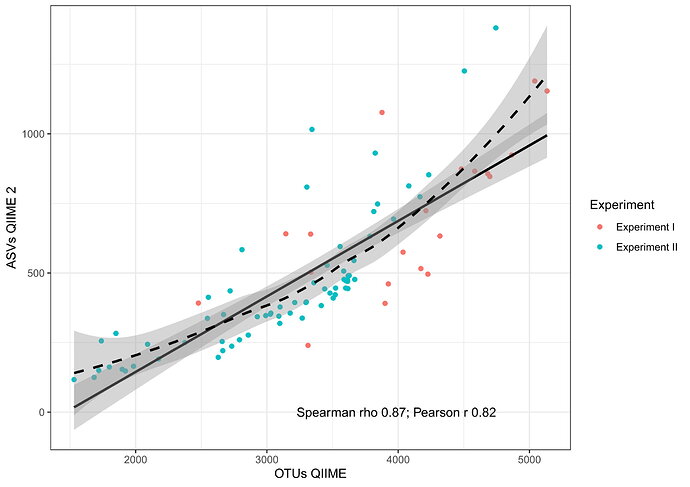 If needed i will later add the parameters set for the pipelines. For now, i would like to know if this is a known issue and what the possible reasons could be.
Thank you very much.

Frequent Questions and "Best of the QIIME 2 Forum"
Annotate Bacterial Genes Amplicon data
how to do the alpha and beta diversity and microbiota composition analysis ?
denoising vs dereplication
Nicholas_Bokulich (Nicholas Bokulich) May 9, 2020, 10:30pm #2

Your results are fairly consistent with expectations and past observations. OTU clustering does a poor job of weeding out sequence errors (or to be more correct, it does not, it just clusters sequences hopefully collapsing some of the rarer errors into hopefully correct centroids). Denoising methods (such as used in QIIME 2) actually remove and/or correct those erroneous sequences, leading to fewer spurious observations. In QIIME 1 we recommended using stringent filtering settings to weed out spurious OTUs; without that, alpha diversity estimates will be vastly overinflated (see the article for details).

I found that QIIME2 accepts more reads, while identifying much less ESVs than OTUs. This was surprising because i would expect that 99% clustering would increase diversity over 97% thresholds.

Because denoising is removing those spurious reads that otherwise just get clustered into rare but likely incorrect OTUs. Check out the dada2 and deblur original publications for benchmarked examples.

There was also a good, but not a perfect correlation between OTUs and ESVs identified, meaning that the causes for the diversity deflation do not apply in the same way all the time.

The lack of perfect correlation does not surprise me, since denoising methods are combining filtering as well as (in the case of dada2) error correction, thereby dereplicating reads into fewer ASVs as well as weeding out noise.

For now, i would like to know if this is a known issue and what the possible reasons could be.

Not an issue, an expectation! If you follow the stringent OTU filtering recommendations for qiime1 linked above, you will find somewhat more similar results between OTUs + ASVs.

Here's a ream of other forum reading that might interest you (both past answers to this same question as well as feedback that relates to your specific workflow, esp. the use of clustering after denoising):

Hello to everyone, First of all, I would like to thanks to all those who tried hard for releasing of the new version of QIIME! My aim to open this topic is to have a comparison between some outputs of QIIME 1 and QIIME 2 (v2.9.1). The analysis has been done by two different person. The outputs are very different with each other and I am looking for the reasons of these differences. First, I will give some general information about the data but if more information needed to be given I would b…

Hello - I would like to bring up a topic that has been discussed before (A quick clarification on clustering) and provide an example from my own analysis. I am looking at one particular taxonomic group within environmental samples of bacterial populations. The method of denoising is dada2, so I am assuming that OTU clustering was not necessary since sequencing errors are accounted for during the denoising process. However, this analysis resulted in many OTU's being defined, some of them quite r…

Hi there, We have some questions about microbial community analysis using DADA2 and other methods. I thought it might be interesting to discuss our observations in this forum. We are looking at the 16S rRNA of the bacterial community in soil samples. We compared different methods: a classical 97% identity OTU pipeline using usearch a zOTU pipeline as proposed by Edgar DADA2_single with samples not pooled, as it is implemented in the DADA2 plugin of qiime2 DADA2_pooled with pooled samples poo…

Dear All, We are trying to establish a 16s library prep in our group and have used ZymoBIOMICS™ Microbial Community DNA Standard (https://www.zymoresearch.de/zymobiomics-community-standard) for the test library prep. We try to target the V4 region and we are using this kit, so we know which species are to expect. I’m following the guidelines for the general workflow (https://docs.qiime2.org/2018.11/tutorials/overview/) and I’m using SingleEnd data because the overlap of the PairedEnd data had …

Hi, I did qiime1 and qiime2 analysis on a same dataset and the taxa barplot outcomes of each methods were very different. Qiime2 denoise step had filtered out almost every sequence from 5 of my 17 samples, while qiime1 didn't seem to have filtered to such extent. Quality check results to show that the same data has been used: fastqc Per base sequence quality used for qiime1 [image] qiime2 demux.qzv file [image] Below is my qiime2 denoising-stats.qzv: [image] Below are the stats…

Hello, I have a general question about ESV and OTU. Normally, I perform analysis in dada2 and assume each unique ESV corresponds to a unique species. As a sanity check, I wanted to obtain the OTU composition of my data (16s paired end sequences). I basically followed the Moving pictures tutorial and created the file table.qza (using the dada2 option). qiime dada2 denoise-paired –i-demultiplexed-seqs demux.qza –o-representative-sequences rep-seqs-dada2.qza –o-table table-dada2.qza --o-deno…