I’ve recently been using Qiime2 Studio and wanted to do some calculations myself over in R to familiarise myself with the data before pipelining the study analysis.

I have a file “Feature Table 1.qza” that I ran through the feature-table > Summarize table menu. In the “Interactive Sample Detail” tab, I found that there were five samples with zero counts.

Using the qiime2R package in R, I read the “Feature Table 1.qza” file and performed colSums on these zero IDs above:

Hi @brfrancis,
Welcome to the forum!

Would you mind sharing “Feature Table 1.qza” so that we could take a look? You can send it in a private message to me (click on my icon and hit the “message” button) if you don’t want to post the data publicly.

This behaviour is interesting as at last check there was an underlying issue with read_biom (the function used by qiime2R) importing tables that had samples with 0 counts. Sharing your artifact would be really helpful to see what is going on!

I don't think I have messaging privileges, so attaching with this reply. Thank you for any help you can give.

Thanks both, apologies but the second half of my message seems to have been hacked off! I’ll send the QZA along to Nicholas, really appreciate the help!

The feature table you sent definitely has no reads for those samples you listed:

So this looks like it is probably an issue with read_biom, as @jbisanz mentioned.

If you have any familiarity with python you could use pandas to explore your data in R-like dataframes. Otherwise, you could bypass the buggy read_biom and instead:

I was able to reproduce this behavior:

The good news is that the non-zero samples counts per feature are faithfully imported for the other samples: 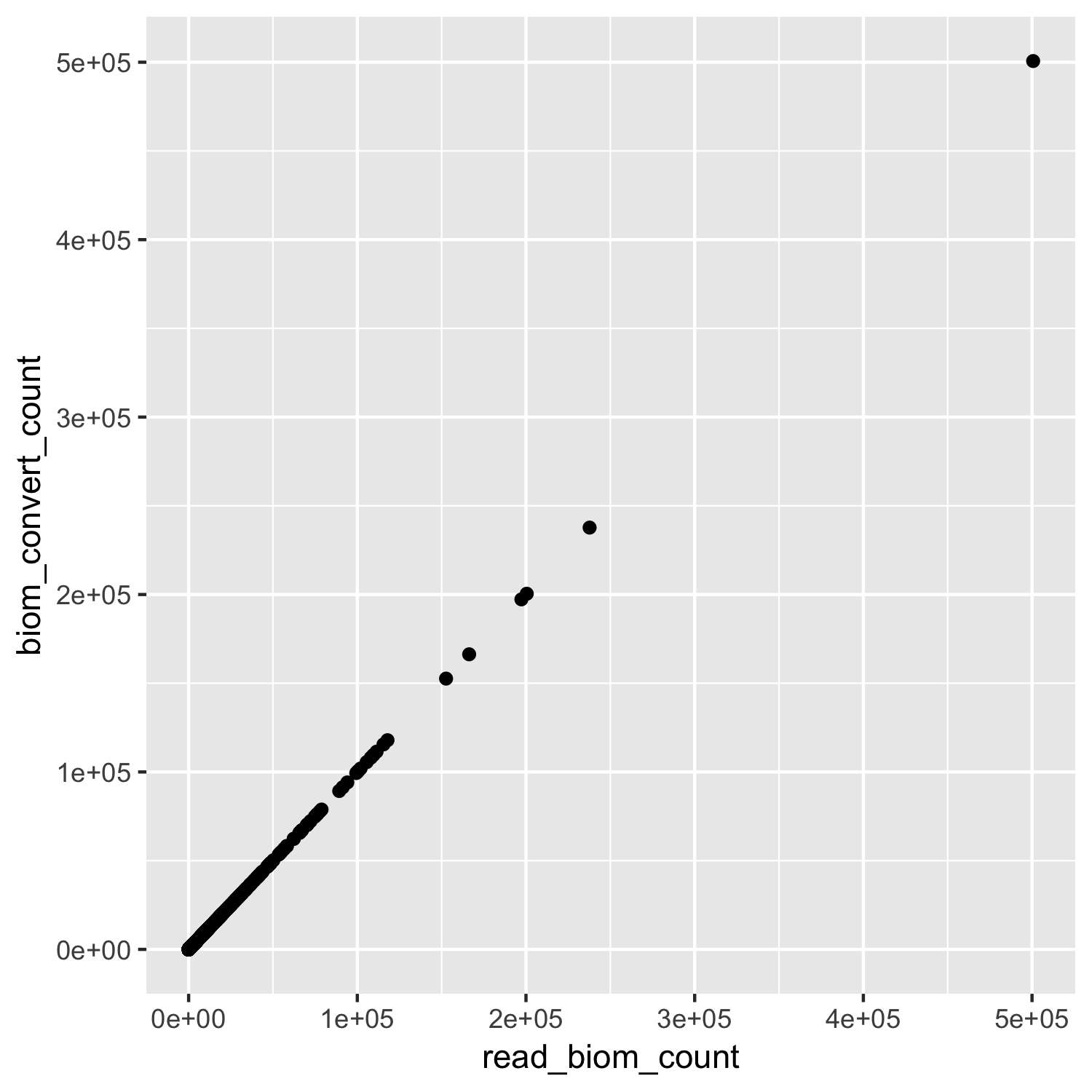 The counts for the zero-samples are being put into only 2 features which would hopefully tip off most users that there is an issue as these samples would be extreme outliers in every analysis. I was able to reproduce this behavior in a second dataset.

I have identified that rbiom (GitHub - cmmr/rbiom: Interact with Biological Observation Matrix files.) does not have this behavior and rather just does not important zero samples at all. I will switch the function used in qiime2R in the very near future.

Thanks so much for your reply. I’ll work in Python instead, makes far more sense!

Seems like odd behaviour from the qiime2R package but imagine these translators are tough to create!