I am concerned and struggling to interpret my demux.qzv even after reading similar posts in this forum. I got the following in qiime2-2018.2: 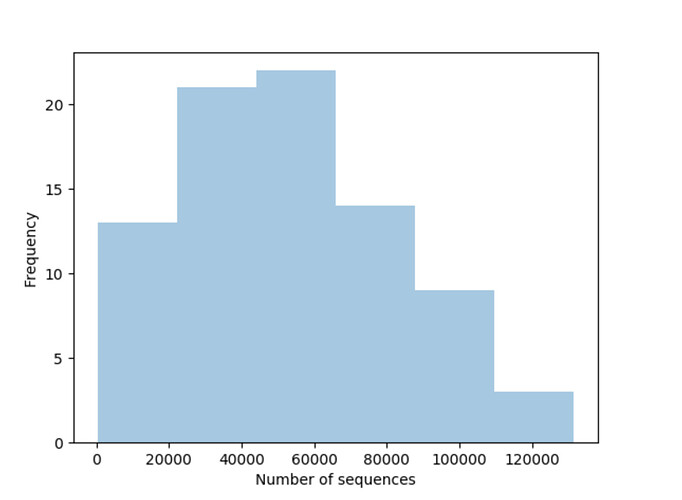 I am concerned because the bars appear red for much of the reads, and the interactive graph reports

The plot at position 142 was generated using a random sampling of 8739 out of 4407868 sequences without replacement. This position (142) is greater than the minimum sequence length observed during subsampling (35 bases). As a result, the plot at this position is not based on data from all of the sequences, so it should be interpreted with caution when compared to plots for other positions. Outlier quality scores are not shown in box plots for clarity.

These paired end sequences came from the facility demultiplexed, I believe with primers and adaptors trimmed (have emailed them to double check). They were sequenced on illumina MiSeq. I do not know if these sequences will pass DADA2, or how I should interpret the minimum sequence length. Only 5/82 samples had poor amplification, so I am not sure what is going on here...

Your quality scores look excellent (though you might use trim-left for the first 30-ish bases). The red is really meant to indicate that the generate box-plot is not comparable with the others as your reads aren’t all exactly the same length.

This will happen because some trimming has been performed:

I believe with primers and adaptors trimmed (have emailed them to double check).

This is a good thing for DADA2, and super necessary for very variable length amplicons like ITS which will commonly sequence through the reverse complemented opposing primer which skews your data and upsets DADA2.

I suspect you should be able to set trunc-len to 0 to have DADA2 not filter the reads to a consistent size before operating. Since your reads are paired-end, the trunc-len doesn’t matter in terms of ASV selection since your eventual feature is always bounded between your forward and reverse primer.

Otherwise, you should be just fine to proceed!