dada2 trim for Bacteria and Archaea

Hi everyone, i have attached an interactive quality plot of my archaea and bacteria paired end sequencing and was hoping someone could confirm or suggest the trimming? 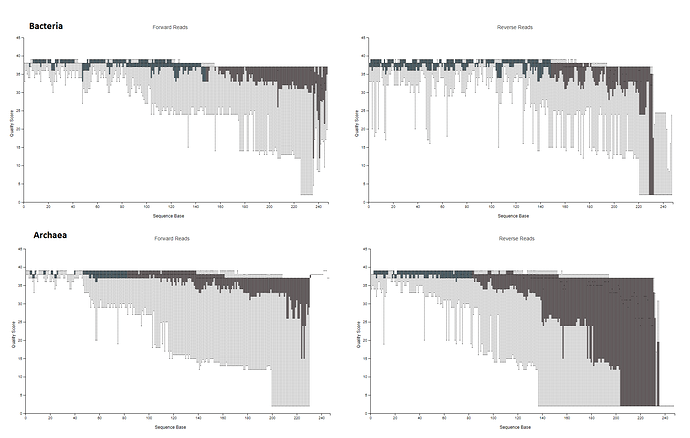 Would you say this is correct. I'm still unclear how good the quality score has to be before choosing where to trim.

Would you say this is correct. I'm still unclear how good the quality score has to be before choosing where to trim.

The trimming position depends on both the quality and on the region you are trying to amplify. After trimming, you still want to reads to overlap a bit so they can be merged, and this depends on the length of the region sequenced.

What region did you sequence for Bacteria and how long is it? What about for Archaea?

Hi Colin , Thanks for the reply. This is what i wasn't sure about. For Archaea it was the v6-v8 region.
For Bacteria it was v3-v4 region. Both of them on the PCR was around 500 bp.

Ah, I think this might cause a problem with the truncation-length you provided in your --p-trunc-len-* commands.

Based on the trimming discussion that Liz linked to you, how much overlap between archaea reads would expect after passing --p-trunc-len-f 120 and --p-trunc-len-r 120?

Hi all. i am running qiime2 to analyse bacteria which target v3-v4 region .

What is the reason for such low number of merged and non chimeric sequences?

I looked at this after DADA2 where i trimmed my forward and reverse to around 220?

What is the reason for such low number of merged and non chimeric sequences?

I've merged this in with our current thread, as merging is related to the overlap settings and the length of your amplicon.

Have you been able find the expected length of your bacteria V3-V4 amplicon and calculate the overlap after trimming at 220 bp each way?

Hi Colin, i'm not sure. It was showing around 500bp on the gel. It worked fine for Archaea and Fungi but i am unsure about this one.

Do you think it is best to not trim at all?

It was showing around 500bp on the gel.

Hi Colin, thank you for taking the time to help me.

I got the idea to use these ones from here:

Thanks for posting that!

With trimming at 220 at forward and reverse, how long would you expect the overlap to be?
(You can refer to this guide, if ya' want:
DADA2: Decreasing feature number as more sequences are maintained - #2)

Hi Colin, thank you for the assistance. I am thinking there would not be any overlap and would be too short?

I could be wrong because i am very new to this and i am still learning.

I could be wrong because i am very new to this and i am still learning.

I've been there too! We are always happy to help!

Hi Colin, thank you for the assistance. I am thinking there would not be any overlap and would be too short?

I suspect it would be fine if I did not trim at all but then it wouldn't remove poor reads?

Again, thank you for your help. I am learning a lot here.

Thanks Colin, so if I didn't trim the forward read and trimmed the reverse around the 230 mark I would have 16bp of overlap. Is this correct?

Thank you very much for your time on this.

Try that command and let me know what you find. You could also run 226 and see how that compares.

Thank you so much for your help Colin, it is running now and we will see how it looks. The DADA2 step was the hardest part for me to wrap my head around.