To check if the BLAST database could assign taxonomy, I imported the same sequences used to create my BLAST database into QIIME (qiime2-2019.4) and assigned taxonomy:

When I exported a taxonomy.tsv table from the BLAST results, most of the sequences were unassigned: 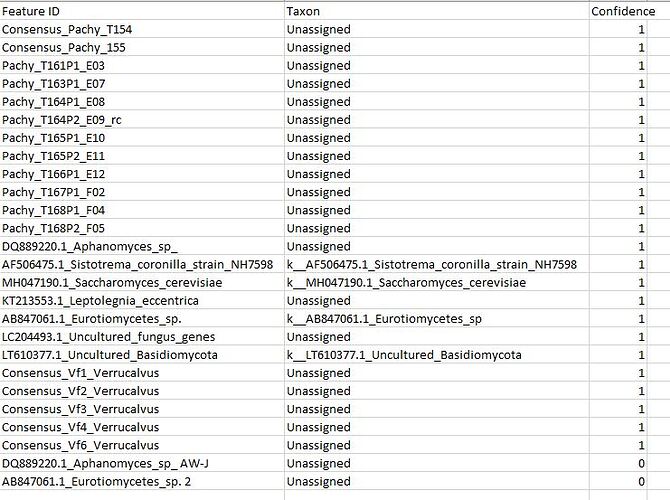 To check my reference taxonomy file was correct I unzipped Pachy_and_off-targets_taxonomy.qza and checked the taxonomy.tsv file within the data folder. It looks as expected: 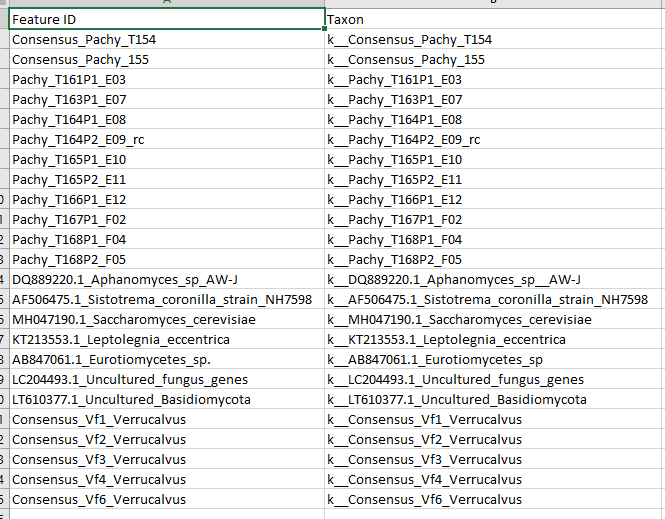 I also performed the same process in Geneious - created a BLAST database then performed a BLAST search of the sequences used to create the database against that database and it worked just fine.

Any suggestions would be appreciated!

Hi @laura.d,
Thanks for posting examples of your reference data! Allows me to very quickly diagnose the issue: consensus taxonomic assignment is failing because your reference taxonomy consists of only one level, and so when a query sequence hits two distinct reference taxa the result is “unassigned” — this classifier is not simply using BLAST, it follows the BLAST alignment with a consensus assignment step in q2-feature-classifier. See this topic for more details on this diagnosis and some potential fixes:

Thanks for sharing your files, @c.older! I was able to replicate this issue and I think I found the problem. So your taxonomy file consists of only one level, the species designation. There is not basal taxonomy or semicolon-delimited lineage. So the vsearch classifier is reporting “unassigned” because it cannot find any consensus among the multiple hits. So let me break down what is happening: Your query sequence 49792e… is being compared against the reference database and grabs up to N hits,…

So you have two fixes:

I personally recommend the classify-consensus-vsearch in q2-feature-classifier instead of BLAST… among other reasons it has a top hits only option that could be put to good use with your custom database.

I also performed the same process in Geneious - created a BLAST database then performed a BLAST search of the sequences used to create the database against that database and it worked just fine.

Probably because Geneious is performing top-hit BLAST instead of the consensus step that q2-feature-classifier has implemented.

Give that a spin and let me know how it goes!

1 Like
different results from self-trained full-length and v4 classifiers
Frequent Questions and "Best of the QIIME 2 Forum"
laura.d (Laura Davies) December 13, 2019, 1:10am #3

Perfect! Thanks @Nicholas_Bokulich, you are the font of all QIIME knowledge