Hi guys, beginner question here, I’ve been using Q2 on mac but just started setting up a new environment on Ubuntu (qiime2-2019.10 running on Ubuntu 18.02 lts). I have a pretty standardized analyzing procedure so I store my codes in a file and I use them as is or tweak arguments as needed, such as:

Which works perfectly on mac but not on ubuntu, it keeps cutting the codes into lines instead of running as a whole. so If I copy the code above to terminal, it returns “missing parameters” as if I only typed in “qiime feature-classifier classify-sklearn \” without passing any arguments, I tried hand typing the exact code in and it works, typing “enter” after “\” will start a new line awaiting input without running just like it should be, so whats the problem? I thought maybe its a system encoding problem so I typed exactly this into text editor and copy/paste but the problem persists, so seems like the “\” only works if Im typing it in and not copying? it works just fine if I copy/paste codes with “\” and “\n” deleted, keeping the traditional bash format, like this: qiime feature-classifier classify-sklearn --i-classifier v3v4_99_classifier.qza --i-reads rep-seqs-dada2-mine1.qza --o-classification taxonomy-mine1.qza. I looked around and there is literally no info around…probably an issue so basic most people solved themselves lol, but Im really stuck, so any help is appreciated, how can I solve this?

Hi!
I am not sure why you have problems with copying and pasting the commands (I am using Ubuntu and don't have this problem), but you can make your life a little bit easier by installing Jupyter lab.
To do it, you can activate Qiime2, then run:
conda install -c conda-forge jupyterlab

after it you can launch it by:
jupyter lab

with adding "!" like in the example.
Now you don't need to store all commands in separate file since everything will be in the .ipynb file 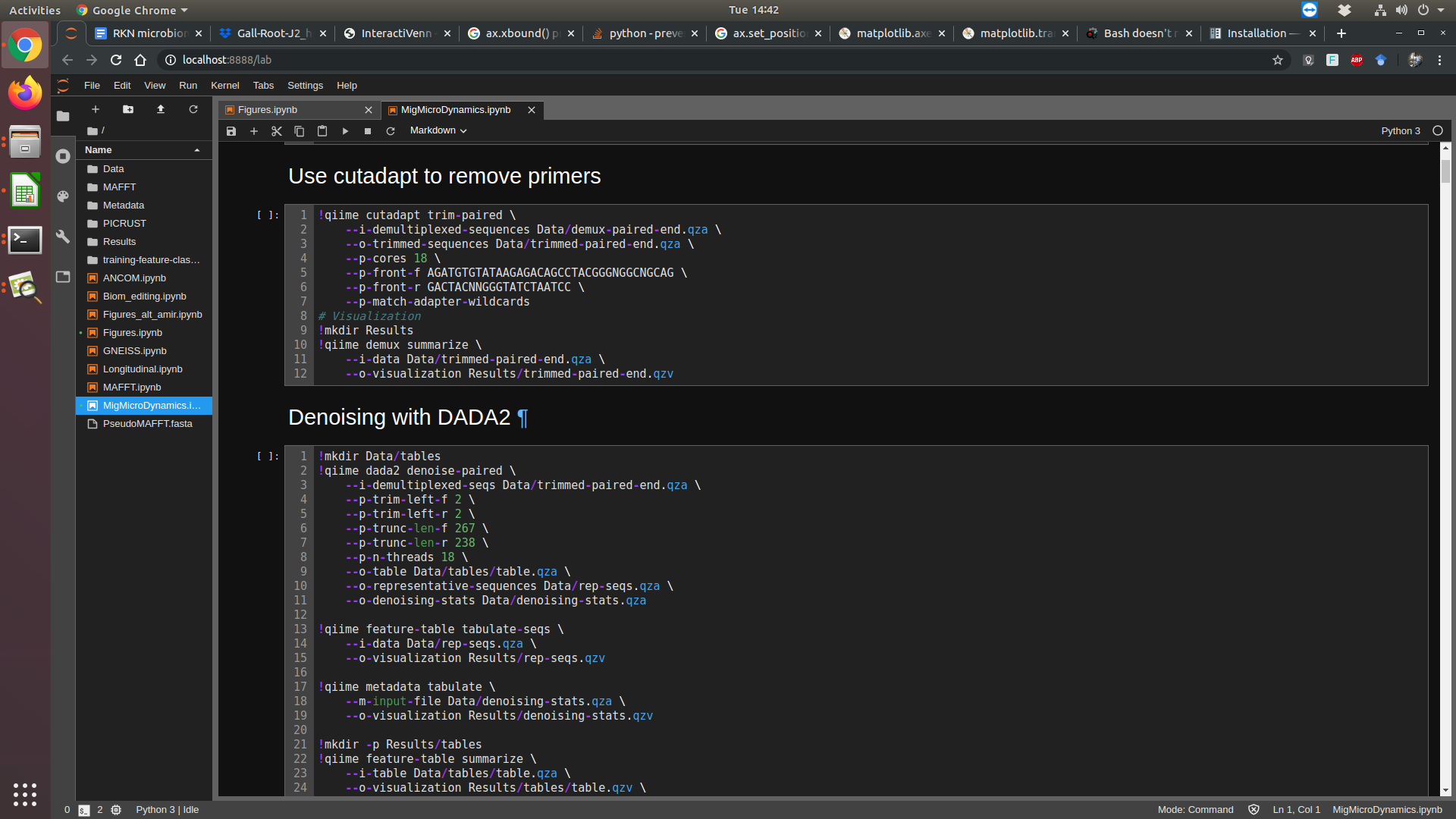 Wow great tip, I always avoided the trouble of trying Jupyter series for some lazy reasons but looking at your interface it looks much easier than copy/pasting, will try it now, many thanks for responding!

Same with me, until installed it once. Now I am in love with this set (Qiime2+Jupyter). You also can combine Python commands with Qiime2 to avoid repeating your commands by using loops and conditions.

You can also get a bash kernel here. It’s super easy to install via pip and and one of my favorite things if I just want to do vanilla bash in my notebooks.

it keeps cutting the codes into lines instead of running as a whole. so If I copy the code above to terminal, it returns “missing parameters”

strange problem, @Marvin_Yeung, especially your description of typing directly into text editor and copying from there.

in the default jupyter python kernel you can just put %%bash at the top of the cell and then you don’t need the ! at the start of each command (in that cell).

but if your notebook is 100% bash commands then @jwdebelius’s suggestion to install a jupyter bash kernel is best!