Dear all,
I got a recent issue while running two similar paths but only changing dada2/deblur from the same sample groups.

From sample group 1,2 and 3 i ran dada2 or deblur following commands below (as suggested in q2 tutorials). For deblur i ran:

And for dada2 (I did this 3 times, for each group as they came from 3 separate sequencing runs followed by a table and rep-seqs merge).

For both options I followed the same downstream analysis to alpha diversity metrics Observed OTUs and Chao index, and observed significant changes whether the denoising followed (just an example with Chao, but is the same situation with observed OTUs). Group 2 (in the middle) is changing a lot its richness, as well as its p value compared to other groups. In the image (up is Chao index computed from deblur files, and down from dada2 files) 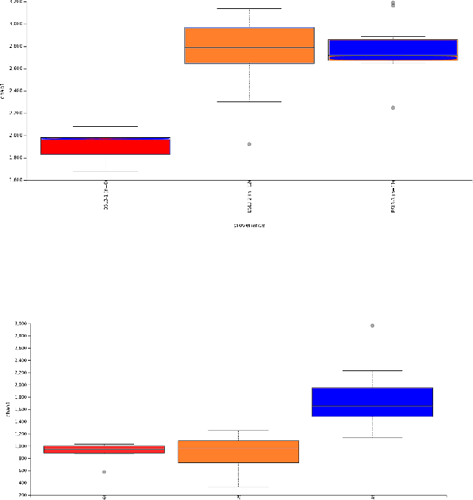 On the other hand, when estimating alpha diversity with Shannon index (taking into account evenness) the situation is the same in both cases, so there’s no problem.

Any idea about what could be going on? I hope everything is clearly explained!
Thanks a lot for your support!

Just a question, did you merged the reads before using deblur? If not you denoised forward read only, making the comparison quite unfair to me! If not, please look at: ‘Alternative methods to read-joining’ tutorial (https://docs.qiime2.org/2020.8/tutorials/read-joining/).

Also as a note aside, I tend not to use Chao2 index because rely on ‘doublets’ count which may be not reliable for the way dada2 filter the sequences out (deblur, I am not sure). I happy to hear other view on this!
Hope it helps
PS I changed to ‘user support’ because it seems more appropriate to me!

Hi @llenzi , thanks for your quick answer!
That’s maybe what could be happening as I did not merge reads. I just started a new analysis doing so, so let’s see if it gets more similar!
As I am quite new using deblur, would you recomend anything else appart from deblur denoising? maybe a chimera filtering. For example uchime (vsearch), I think de novo wouldn’t be necessary, but perhaps uchime-ref after deblur (https://docs.qiime2.org/2020.8/plugins/available/vsearch/uchime-ref/). Or another step?
And about qiime quality-filter q-score, it is recomended in the moving pictures tutorial to be used under default parameters, but it’s not PHRED score = 4 a very low value? (compared to dada2).
Thanks a lot for your help!!

Hi @pau,
I don’t use much deblur myself, but I would start following the tutorial linked above. The chimera filtering should be included as one of the deblur step (as well as within dada2) so should not be necessary. There are many interesting discussion on the statistic beyond deblur (Deblur stats.qzv file meaning and interpretation), and comparing dada2 and deblur results (Different taxa result from DADA2 and Deblur). So please search also the forum for more information.

On the quality filter, from the manual: the default for the quality-filter q-score=4 (https://docs.qiime2.org/2020.8/plugins/available/quality-filter/q-score/), in the dada2 denoise-single: the default is 2 (https://docs.qiime2.org/2020.8/plugins/available/dada2/denoise-single/). So it seems even lower to me!

For the comparison, please consider that deblur pre-filter the sequences to exclude anything not loosely similar to 16S, so if you have other species in the samples, they will included into alpha-diversity results using dada2 but not in the deblur results. That may be misleading too!
Hope it helps