An earlier post by @CarlyRae first introduced me to the fact that when examining beta diversity I need to consider not only the results of a multi or univariate anova, but also examining if the within-group distances to a centroid were equivalent among my groups. I'm wondering how to best interpret the situation where everything turns out to be significant. That is, if the results of both PERMANOVA and PERMDISP suggest significant differences, where do most people go next? I've run these tests both in QIIME and separately with vegan in an R environment; while QIIME's visualizations show barplots, Carly's suggested ordinating these data.

In that spirit, I was futzing around in R this morning and came up with this: 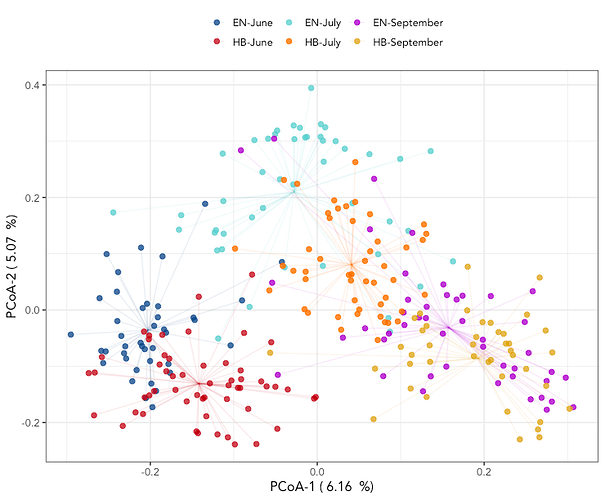 The points represent samples, the colors represents the groups of samples they belong to. This led me to a few questions:

Last bit: I saw @jwdebelius was thinking about this topic in a recent post... @Nicholas_Bokulich- does the permdisp function work for your QIIME Adonis plugin as well as beta diversity?

9 Likes
ADONIS: correct interpretation of interaction among factors
permanova and adonis results significance
interpretation beta diversity / permdisp / adonis
Frequent Questions and "Best of the QIIME 2 Forum"
How can I compare the dispersion of two groups to reinforce the results of PERMANOVA ?
jwdebelius (Justine Debelius) April 25, 2019, 8:24am #2

Thanks for tagging me in this discussion! This is an area I'm getting into and getting excited about; the referenced post was awesome.

I think you're looking for two separate functionalities: statistical test and visualization. I think they're closely linked, but slightly different things.

As far as I understand, permadisp is the statistical test that measures whether the dispersion of a group of samples in ordination space is different between groups (essentially a measure of variance). I usually use the scikit-bio implementation, but the result is essentially the same. The permadisp function is statisitcal test that gives a psuedo-F and permutative p-value for whether or not there's dispersion between the two groups or more groups.

Visualization is a second issue and is maybe more subjective, but that's the plot. QIIME (again AFAIK, Im not a developer and do most of my own analysis in python because I like control) doesn't have a way to visually show the centroids for clusters. Personally, I think I'd rather see the centroid as a cloud with a variation limit rather than the center point (like transparent, or something).

I think the steps to getting there for an initial prototype might be the following:

My list of steps is probably a vast oversimplification and I'm missing something obvious, but I think that would be my first pass to try it. Probably in the underlying python architecture. Although @yoshiki can probably give limitations of emperor better than I can.

I don't have the bandwidth right now to play around this. Maybe over the summer when everyone here goes off on vacation

, Ive got a confusing number of hours of daylight, and theoretically more free time. (Although that feels like a dangerous promise.)

Just want to chime in to answer some specific questions tossed my way:

Pardon my complete ignorance, but could I have generated this ordination in QIIME anyway?

The ordination yes, the centroids no.

I was worried that the proportion of variance explained by the two eigenvectors was quite low, and wondered how researchers use this information in their interpretations of the figure itself.

It is very low. A small % of variation is explained by the first 2 PCs! Not necessarily a problem, just that season effects (while the effects evident in that plot) are not earth-shatteringly impactful. Makes sense — while you get species turnover by season, many of the same species will be present across proximal seasons.

does the permdisp function work for your QIIME Adonis plugin as well as beta diversity ?

Yes. Both permdisp and betadisper accept a single “grouping” factor so you just need to test each factor individually if you are comparing to, e.g., a multi-factor adonis test. I think the original paper on the permdisp method explains why multi-factor permdisp is not possible but cannot recall the reason right now…

I’m still left wondering what to make of results where permdisp and permanova are both significant. My understanding is that:

What I’m hoping to help clarify is what to then infer. Is this kind of like an interaction effect in an ANOVA, in that your main effects are conditionally dependent? In the case of interpreting the beta diversity output, is it fair to say that if PERMDISP and PERMANOVA are both significant, then you’re finding that there are group differences, but you can’t conclude why those differences exist?

Would there be an appropriate post hoc test to run to further tease apart what group/factor might be driving the significant PERMDISP result? When I run the Anova test in R directly with betadisper I can see what the average distance to the median is, and it’s hard to convince myself that these differences are super meaningful…

For example, if I examine the dispersion output for both Site and Month:

What I find is that yes, there are apparently statistically significant differences, but those are pretty small, and that’s what you see in the plot I posted in this thread initially. And it follows a trend I’d expect; you get less dispersion in June because there are fewer insects out in the environment then (so the variation should be less).

@CarlyRae suggested in her post that a TukeyHSD test might work, and if I run an HSD test for both Site and Month, then I find that (1) there are differences between Month (in this case, it’s June:July and June:September that are significant) as well as with Sites (but because there are only two sites, there aren’t multiple pairwise differences to be investigated). My takeaway from this is that June is really what is driving the dispersion difference - is that sensible enough?

For what it’s worth, in reading through Marti Anderson’s recent paper outlining both of these concepts, it seems like ordinating both the main and interaction effects is advised, but I wasn’t clear how adding centroid distances was useful.

If PERMDISP and PERMANOVA are both significant and your sample size is not balanced then you can't tell if the PERMANOVA is significant because of centroid or dispersion. But, if your sample size is balanced then a significant PERMDISP and PERMANOVA indicate the both the centroids are different for at least one pairwise comparison and your dispersion is different for at least one pairwise comparison. See "PERMANOVA, ANOSIM, and the Mantel test in the face of heterogeneous dispersions: What null hypothesis are you testing?" MARTI J. ANDERSON AND DANIEL C. I. WALSH.

Your plot looks like you have a balanced design so in your case you might have an easier answer. Yes, both are truly significant. I have conducted analyses with unbalanced designs with significant PERMANOVAs and PERMDISPs, so I always plot with 95% confidences ellipses. If the confidence ellipses don't overlap then that indicates that the centroids can be considered statistically different. If they show minimal overlap, I also generally consider the centroids to differ, but this is more subjective.
Here is some R code for that. 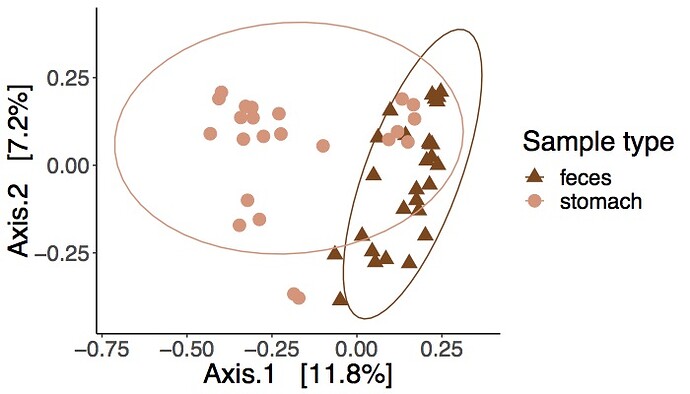 Or you could plot from PERMDISP (different dataset) 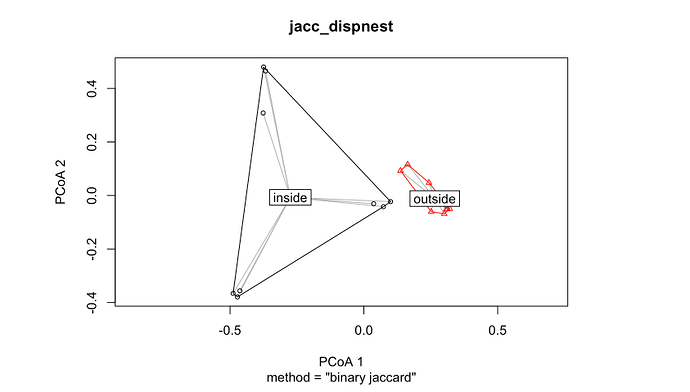 Sorry, I forgot to mention that vegan package folks added this warning in the last couple years to betadisper function in R see ?betadisper

Using type = median is more appropriate now. I haven’t read up on this yet though. But, I took their warning.

Thanks for the illustrations and response @CarlyRae!
In future work creating plots of poop, you might consider the color palette named in an xkcd survey (yes, you bet there’s a baby poop green color…)

Just to confirm what you were saying about overlapping confidence intervals:

What I’m curious about is whether you like using the same overlapping characteristics as a visual check for both the dispersions and group centroids.