When running beta analysis tests (Sokal-Michener and Yule specifically) and visualizing them with emperor plots, do the 3-5 axes generated in the visualization correspond with the metadata file or with the species ID's themselves?

When running beta analysis tests (Sokal-Michener and Yule specifically) and visualizing them with emperor plots, do the 3-5 axes generated in the visualization correspond with the metadata file or with the species ID's themselves? I am having some trouble interpreting results and the emperor plots offer no labels beyond "axis #". If I were to show some of my result in a new post, would anyone be able to help me interpret the statistics? I have a general sense of the patterns in data but I want to make completely sure I am doing everything correctly.
Also, how are alpha diversity tests best visualized? (specifically, Brillouin's, Chao1, Pielou, and Simpsons evenness) I know the "qiime diversity pcoa \ qiime emperor plot" combination doesn't work, and I haven't been able to find the correct visualization command. Thank you!

I used ITSxpress to process my samples, then the following commands for beta diversity (square brackets denote file paths I included within the program but not here). I also ran tests for alpha diversity (Brillouin's, Chao1, Pielou, and Simpsons evenness) but have not been able to visualize these properly.
beta diversity analysis -

I am not very familiar with all of these tests, so I want to make sure I am doing it correctly. I'd be happy to supply any more information if needed. Thank you for your help so far! This forum has truly been loads of help to my project.

The percentages corresponding to the axes generated are displaying the variance explained by that axis. The differences between points are calculated by your metric which compares your sequences, not your metadata. To determine if the differences between your groups are significant you’ll have to run other tests such as a PERMANOVA using the beta-group-significance command.

If you are comparing categorical metadata and their associated alpha diversities, you can run alpha-group-significance which will output significance values for the metric you ran as well as plots (in a box and whisker format). If you want to see the actual core data (as in the alpha diversity assigned to each group), you can change the .qzv at the end of the file name to .zip and unzip the file.

Since you're relativity new to QIIME2, I highly recommend going through the Moving Pictures Tutorial. It will walk you through all of the basic steps of analyzing data and will provide you with all of the commands to do it all which is really helpful! Depending on the type of study you have, check out the other tutorials too. The other tutorials walk you through analyzing other types of data sets (e.g. longitudinal data) and will give you in-depth descriptions and commands for each step of the analysis.

Let me know if you have any other questions!
Stephanie

Thank you for your help!!
I ran the sokal-michener tests and visualizations, and got the following emperor plot and adonis results - 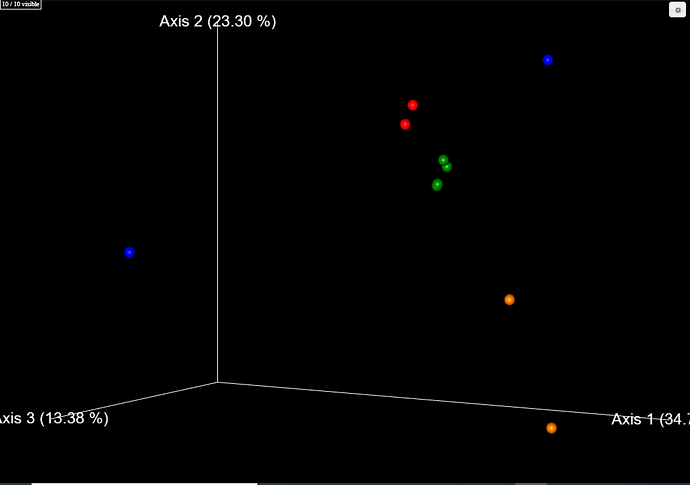 With the Pr(>F) data - is this synonymous with p - values? What value of Pr(>F) would dictate statistical significance?

Am I on the right track with this analysis? Thank you again for your input!!

Looking at your data you can say that plot locale explains ~49% of the variation.

Pr(>F) is the p-value that is associated with the F statistic of a given effect and statistic. Typically, people use 0.05 as their threshold for significance.