ValueError: Feature IDs found in the table are missing from the taxonomy

Hi,
I'm using the June 2018 release of QIIME2 and I'm having a problem I didn't have with previous versions. I'm doing a community analysis of environmental samples taken at different time points and trying to merge the analyses together after sampling and sequencing. I've previously done this by importing the new sequences, demultiplexing, denoising with DADA2, using sklearn to assign taxonomy (Silva128 release) and then merging the feature tables and taxonomy tables.
When trying to add my latest batch of sequences to the previously merged data set, I can merge and filter the feature table (remove singletons) and merge the taxonomies as before with no problem, but when I try to generate the barplot (qiime taxa barplot) I get the value error indicated in the subject line.
I've gone back and repeated the merge step from my previous analyses (that worked before) and got the same error, so I wonder if something has changed in the new version that I'm missing?
I've used the same feature classifier for all of the taxonomy assignations to try to avoid messing around with the feature id's but that strategy seems to have failed

I've attached the merged and filtered feature table as well as the merged taxonomy and screen shot of the error message. 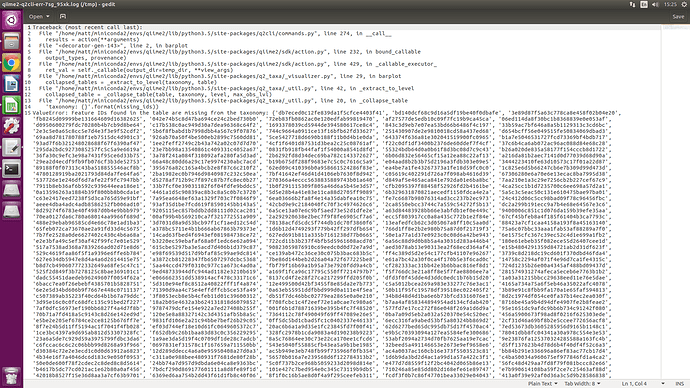 Thanks for any help or advice you have!

My last one is still pending so if you have a way to push these together on your system, then you should do that

I’ve rolled back to the 04-2018 release and this problem disappears. Same commands, same input files. I’m guessing something has gone a bit haywire in the new release where this feature

Fixed a UX bug by improving error transparency in the collapse method. Users are now notified if the Feature IDs in their FeatureTable[Frequency] are missing from their FeatureData[Taxonomy]. Thanks

Was added that it’s not just notifying me, it’s throwing an error and stopping the script.
Is there a way around this?
Thanks!

Was added that it’s not just notifying me, it’s throwing an error and stopping the script.

This is the intended behavior — this missing ID situation is a problem — previous versions of q2-taxa silently ignored this condition, now we are raising the warning and stopping execution. Its a problem because the old behavior was removing features that were in your table, but not in your taxonomy, which could be misleading when interpreting data.

I’ve rolled back to the 04-2018 release and this problem disappears.

I would recommend sticking with the latest and greatest. As I mentioned above, this warning message is not a bug, it is warning you that you have mismatched feature IDs.

Is there a way around this?

Yep, filter those missing features out of your feature table. In particular, you can provide your taxonomy artifact as metadata when performing ID-based filtering:

Hi! Thanks so much @thermokarst!

Just to make sure I understand why I need this step:

Thanks so much for your help. You mods do an excellent job on this forum. Now if only there was a workshop somewhere in East Asia - Singapore and Hong Kong are nice almost every time of the year

You can close this topic; thanks again!

I am not sure I understand the question - how are you "merging taxonomy"? When I am merging multiple runs, I do that first, then do taxonomic assignment --- the resulting taxonomy has exactly one entry per feature in the table/seqs.

Now if only there was a workshop somewhere in East Asia

Talk to your institution, we teach QIIME 2 workshops worldwide. For more info, check out this link: 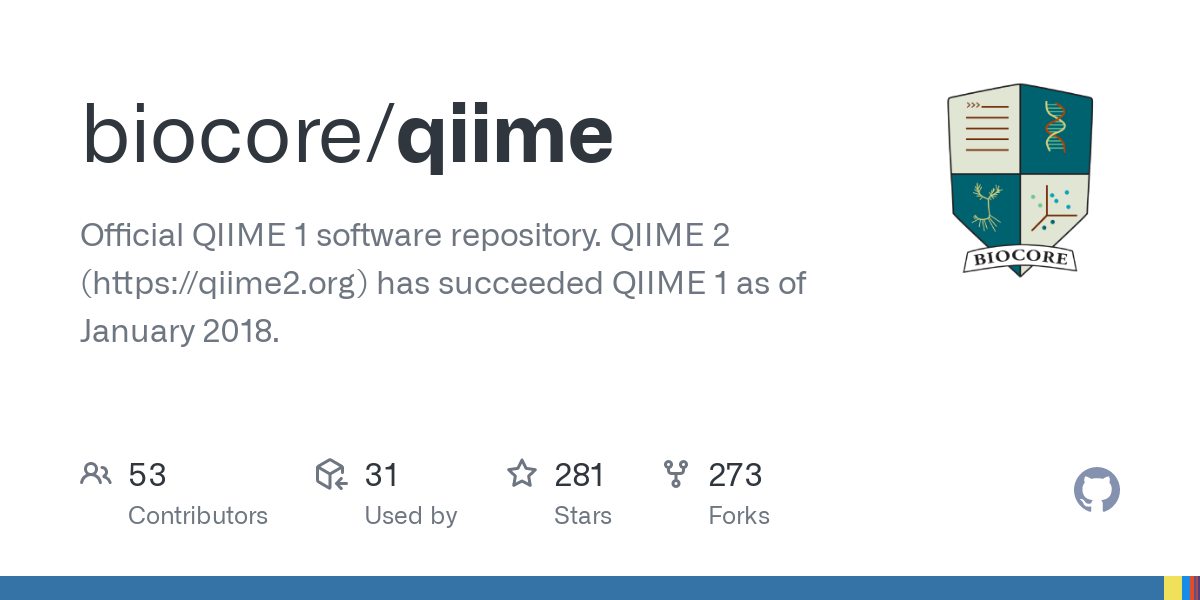 I think most of the feature discrepancies between the feature table and the taxonomy arise from table curation (singletons removal, etc), but there are definitely some features that are present in the merged feature table that are not present in the taxonomy. I'm not quite sure how this happens. Here is the merged feature table (without curation), the merged taxonomy and the error log. I assigned these taxa to the DADA2 output with an sklearn classifier trained on the Silva128 database and then merged with qiime-feature-table merge with the following commands:

The barplot is where the error occurs, as before. I know how to fix this problem now but it is a bit of a mystery to me where these features are coming from.

I've used the "sum" on the feature table merge because there is one sample that was rerun. In my actual analysis I've omitted that sample before merging the feature tables, but I wanted to run everything here with the original outputs.

If you have some ideas about where those features are coming from, I'd be grateful to hear them. But if you're busy with other people's actual problems don't worry about it since you've already solved mine

Thanks for sharing some data, that is super helpful — honestly I have no clue what is wrong, and something isn’t quite adding up here. Would you be willing to share the rep-seqs outputs from DADA2, too? You can send in a DM to me if you don’t want to share publicly. These should be 5 FeatureData[Sequence] Artifacts with the following UUIDs:

You can check an Artifact’s UUID by running qiime tools peek on it.

Thanks for your help!

Thanks for following up with more data in a DM, @matt_rogers! 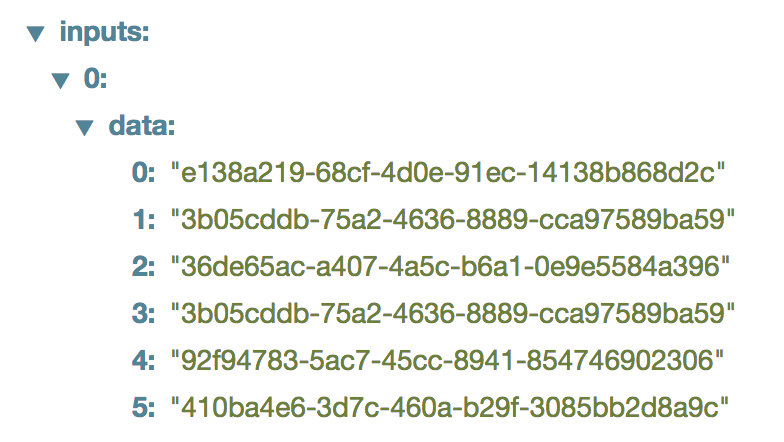 So, that would explain why there were missing features in your taxonomy! Phew, glad you figured this one out - I was sweating over here