I want to test QIIME2 to compare results with ones of QIIME1 and check if two program can same output results or not.
Before I use QIIME2, was using QIIME1. QIIME1 can hardly handle more than 200 samples, so I intend to change my original analysis protocol into QIIME2. For that, I have to get as same results of QIIME1 as possible or more precise results than ones of it.

Before start, I wanna say my 16S metagenomic sequences were sequenced at V3,V4 regions. I used a trimming and merging program, "PandaSeq" in my QIIME1 protocol as denoising phase in QIIME2.
FYI, I used this command.
command: pandaseq -f -r -w <merged.fasta> -g -t 0.9

I faced some problems at dada2 denoising. 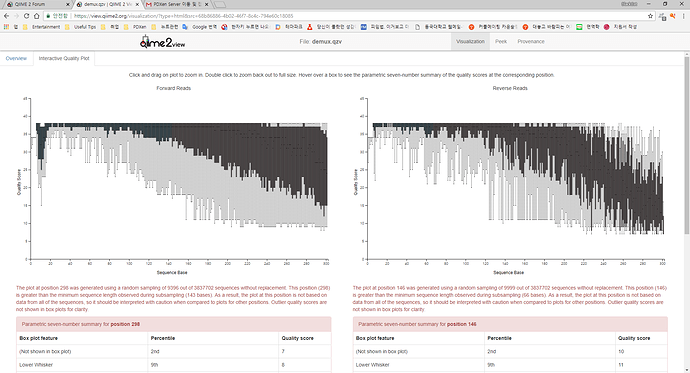 First, viewed the "demux summarize" result. I decided to trim forward ones at 260 and reverse ones at 200 where quality score dropped under 30.
I ran the dada2 denoise with the paired 16S metagenomic sequences, and checked table.qzv. As you see the table.qzv, when inclining sampling depth a quite little, some samples disappear. This never happened in QIIME1. Where do I have to trim for almost same results of QIIME1?

met another problem, a red-colored message in demux summarize view.
"The plot at position 144 was generated using a random sampling of 9999 out of 3837702 sequences without replacement. This position (144) is greater than the minimum sequence length observed during subsampling (143 bases). As a result, the plot at this position is not based on data from all of the sequences, so it should be interpreted with caution when compared to plots for other positions. Outlier quality scores are not shown in box plots for clarity."
It says some reads are shorter than other normal reads. I think the message is warning to me in red color, but, do I have to care about that warning? The position changes whenever demux-summarizing, so I'm in chaos if consider it or not.

Hi @Seok_Jun_Kim,
This looks just like this inquiry we had recently which might be worth following as well. My initial thought is that you are truncating too much of your reads, thus not leaving enough overlap coverage for dada2 to properly merge your reads. See here. In addition you may be discarding some reads from the initial dip you see in your Forward read’s 5’ which you may want to trim as well. If you could share the stats-output from this run we take a closer look (you’ll need to upgrade your q2 environment).
A few additional notes.

For that, I have to get as same results of QIIME1 as possible or more precise results than ones of it.

OTU picking and Denoising methods are very different from each other so don’t expect the same results here as it would be comparing apples and bananas.

. But you should count on the dada2 data to be truer to the truth than OTU picking. If you need to compare OTU methods between qiime1 and qiime2, you could try the vsearch method and even then you can still denoise your reads with dada2 before that. Generally, I would advise against OTU picking methods on their own unless you have a specific reason to do so.

I used a trimming and merging program, “PandaSeq” in my QIIME1 protocol as denoising phase in QIIME2.

Not sure what you mean by “as denoising phase” but just be aware that you shouldn’t do any prior modifications or denoising before dada2 as it may interfere with its own internal denoising.

Where do I have to trim, for almost same results of QIIME1?

See my link above regarding trim/truncating guidelines.

I feel like continuing to see that red message in the future. Whenever facing it, how do I interpret it, and how should I solve it?

This message is essentially telling you that at the position where your mouse is hovering at there are reads that are shorter than that position. This is likely not an issue as some shorter reads (true sequences or artifacts) are inevitable and commonly found in these runs. If a majority of your reads however are shorter than you expect then this would be worth looking more in detail. In the most recent version of q2 (2018.6) you can also retrieve information about read lengths, so I recommend upgrading your environment if you want to look at this more closely. In fact you should always keep up with the most updated version anyways

The link helped me a lot.