Hi timanix,
Thanks for trying to help. Unfortunately the problem persists…
I get the same error.
Faiga

Could you run the following commands in your environment:

Also maybe provide a screenshot of the command you ran and the error in the terminal? What you’ve provided doesn’t quite line up with what q2cli on QIIME 2 2019.4 will do in the situation you’ve described, so I would just like to confirm.

Hi @ebolyen,
Thanks for your reply.
I ran the commands. The screenshot is as follows: 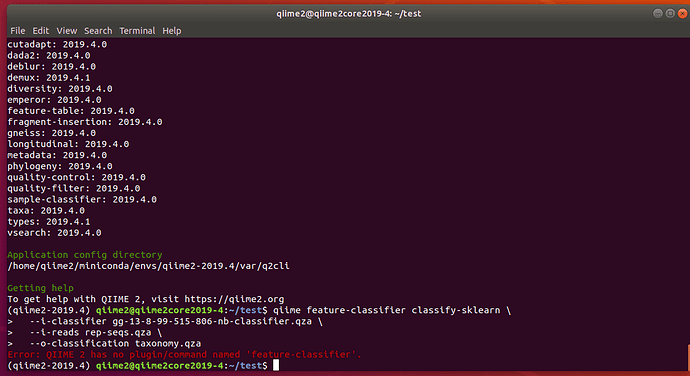 It appears that the feature-classifier plugin is not installed based on the tail end of the qiime info I see in your screenshot.

I would recommend destroying the environment and reinstalling it. It’s possible that at some point you upgraded scikit-learn, conda would have provided the option of uninstalling feature-classifier to solve the environment specification (thus removing the plugin).

I think starting over with the environment will be the easiest.

Hi @ebolyen,
Sorry for the “basic” question but, does this mean I have to delete the qiime2 version installed in my computer and install it again?
Thanks again,
Faiga

No worries, and yes! You can do that with this command:

Since we’ve just released a new version (2019.7) you may as well update to that while you are at it