I am trying to run the feature-classifier plugin and run the “classify-sklearn” like the moving pictures tutorial does (but for my own data not the tutorial data) using q2studio, but I am not sure which action (method) to run. The only method that is not greyed out is “extract reads from reference”. I also downloaded the “gg-13-8-99-515-806-nb-classifier.qza” (because the is the classifier I would like to use) and placed it in my working directory to see if that would make the other methods not be greyed out, but for some reason q2studio does not recognize the file as an artifact. Any thoughts?

but for some reason q2studio does not recognize the file as an artifact.

Do you see it in the table at the bottom? If so, then QIIME 2 sees it, but the method may be greyed out for other reasons. For example, you might still need some sequences to classify. You should see something like missing: FeatureData[Sequence] in that case.

Would you be able to post some screenshots of what you are seeing (include the bottom table too)?

Hey @ebolyen - I placed the file in my working directory but I do not see it popping up in the table as you mentioned. Which is why I was thinking q2studio may not be recognizing it. Here is a picture of the table: 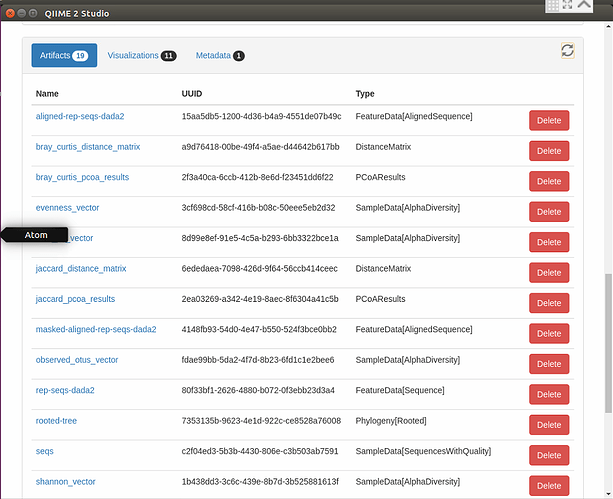 This is what the feature-classifier plugin shows up as:

Hi @patthehat033! Is your pre-trained classifier in the same directory as all those other files? It can’t be in a nested directory, since q2studio only looks one directory at a time. Can you provide the output of running ls -lah in your working directory?

Hey @thermokarst the classifier is sitting in the same directory (not nested) as the other files. Here is what comes up when the ls -lah command is run: 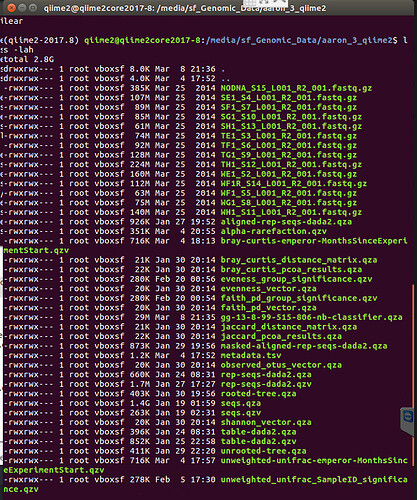 Hey @thermokarst, just wanted to follow up and see if you had any further ideas on this? If not, I could run it via command line and see how that works out.

Sorry @patthehat033, I was traveling last week! First off - it looks like you are on an ancient version of QIIME 2 (2017.8) - this is no longer supported. With that said, I would just double check that you have the right types of files in the analysis directory (a TaxonomicClassifier and a FeatureData[Sequence]). For example:

Then, the method becomes available:

PS - If you were running a newer version of QIIME 2, you would actually see this warning:

YMMV with the studio right now, so probably makes sense to focus on the cli.

@thermokarst No worries at all!

I installed the 2018.2 version in a conda environment and I believe it working correctly in the CLI - it is still running at the moment.

Is it possible to make q2studio use the new conda environment? If so, how would I approach that situation? --On second thought, I guess I would either need to install a new virtualbox or run through this - https://docs.qiime2.org/2018.2/interfaces/q2studio/