So, I tested Sklearn-classifier with 15 archaea 16s rRNA represent reads from Vsearch representative reads. The result showed something wrong that all the 15 reads were classified as bacteria. 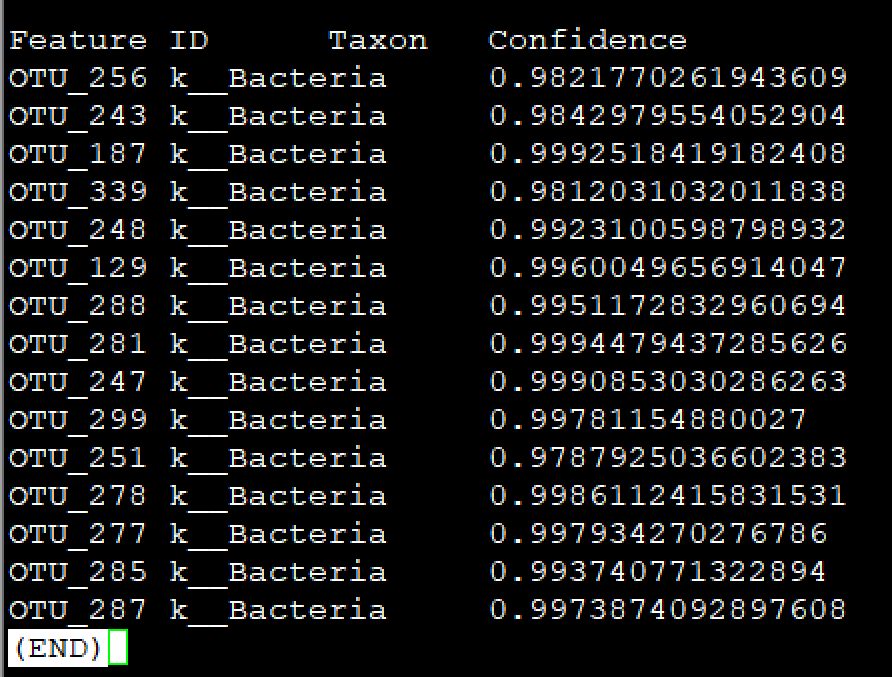 when I remove one read, the result seemed normal.

How did the representative reads influence the taxonomic classification?

Anyone know what I did wrong with my archae analysis, using the SILVA database for archaea?
SoilRotifer (Mike Robeson) January 30, 2020, 7:17pm #2

It could be there are not many reference reads that match these particular Archaea sequences in GreenGenes? Also, it could be that there are legitimate Archaea references in GreneGenes, but the extract-reads step might have up excluded too many Archaea as a result of mismatches between the representative sequences and the primer sequences. Thus affecting the classifier? I am not really sure. Perhaps others have better insight.

Meanwhile, I would try a few simple things to sanity-check this issue:

Let us know how this goes.

The sklearn classifier should not give different classifications each time you run it… unless if your sequences are in mixed orientations, which confuses the classifier as described here:

classify-sklearn cannot currently handle reads in mixed orientations — it guesses the orientation of reads based on the first 100 or so, and then processes them accordingly, but if reads in the opposite orientation crop up it becomes discombobulated. Those samples for some reason must have their reads in opposing orientations. For your workshop I would recommend just excluding those samples, or use classify-consensus-vsearch to avoid this issue.

So that explains why removing one sequence causes the results to change, and also probably why a few of these classify as Archaea and the others as Bacteria.

Even though you are using extract-reads, you are probably hitting a few bacterial sequences. classify-sklearn would not give bacterial classifications unless if this annotation is present in the (trimmed) reference database that you are using.

So in addition to @SoilRotifer’s advice about starting with the full-length database, I’d advise trying to orient your sequences in the same direction. Unfortunately QIIME 2 can’t do that for you right now. Another option is to use classify-consensus-vsearch, which is able to handle mixed-orientation sequences.

Thanks!
The result of using full-length 16S Greengenes classifier was wrong.
I used SILVA 138 classifiers instead of Greengenes, and found many archaea in the result.

Thanks for getting back to us @mol! I’m glad we were able to help.