I'm wondering if it's possible to view the chosen metadata column within the Q2view provenance in cases where a plugin uses a CategoricalMetadataColumn. Take, for example, diversity beta-group-significance.

When running this command, you choose a column in your metadata on which to test beta diversity significance. However, I can't seem to find this column choice in the online provenance. 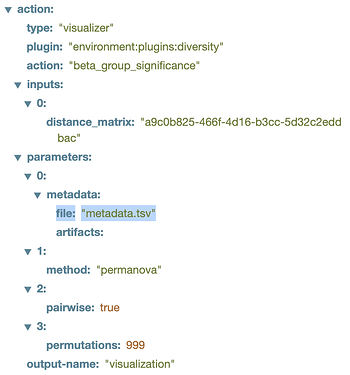 Now, in the case of beta-group-significance this information is obviously pretty clear from the visualization itself. That being said, since this information exists in the archive itself at some <UUID>/provenance/action/metadata.tsv I think it would be useful information to show up in this view.

The reason I bring this up is because I'm working on a plugin and it's not as straightforward to incorporate the column name into the artifact/visualization data. In my case, I would like users to be able to easily check the metadata column that was chosen for commands. I've uploaded a qza + qzv from this plugin as examples.

If this is a feature rather than a bug, I'd like to know so I can figure out a way to include the column name into the artifacts/visualizations themselves before I do a bunch more development.

(Also I imagine there's like a 50% chance that this information actually is available in the online provenance and I just completely missed it like when looking for ketchup in the fridge...)