We ran the analysis against the UNITE ITS database, however the result included the genus Ciliophora, which was unexpected. Despite the fact that the genus Ciliophora exists in the kingdom Fungi, all of the sequences classified as Ciliophora must be considered Alveolata sequences (Kingdom Protista) and we would like to remove them from our analysis.

We removed the Ciliophora genus from both files (just one that matched to the genus) and reran the classifier training as follows, using the taxonomy and fasta sequence from the UNITE ITS database.

However, when compared to the previous version, the new runs turn out to be somewhat different. When comparing the ASV tables from the two runs, I noticed that a few ASVs that were previously matched to another taxonomy were no longer matched to groups in the new run. Example output between the 2 experiment is shown here (phylum barchart 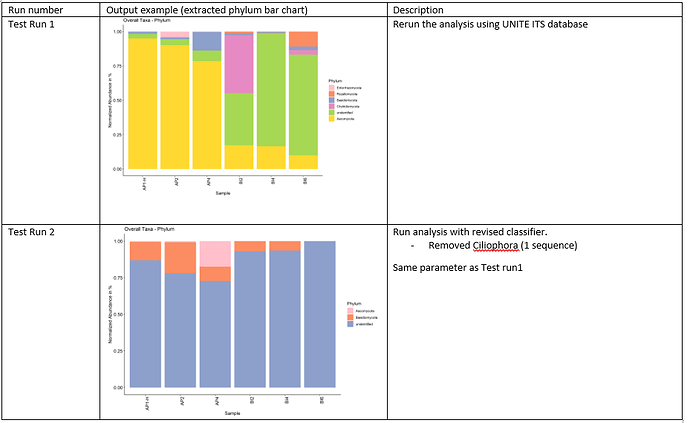 Hi @kamalghazali welcome to the forum!

It sounds like your reads are in mixed orientations. See this topic for more details on what is happening, and some troubleshooting steps:

Hi @laurenmlui, Very strange. To give me something to work with, would you mind running qiime metadata tabulate on the full data (~1000 seqs) and non-buggy test subset (7-10 seqs) and posting the QZVs here? Are your reads all in the same orientation? What happens with you add --p-read-orientation same (or --p-read-orientation reverse-complement) to the command? I suspect the orientation predictor is going haywire so setting the correct orientation may set things straight. Why do I think that…