but I obtained an error.

Moreover, I sent also the command:

so the system created the file tree.nwk, but when I attach the file in microbiomeanalyst software , the system suggests to me that tree tip labels do not match feature names in the OTU/taxonomy tables.

How can I resolve the problem?
thanks
Carmen

Can you post you the full error you got while running core-metrics-phylogenetic? I'm looking for something that would explain the mismatching tree tip labels. 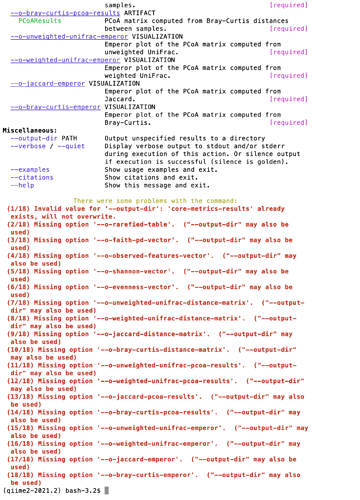 Are those errors all new, or did you get some of those same errors when you ran it the first time?

so I tried also these commands:

but I have the following error: **(1/1?) no such option: --o-observed-otus-vector Did you mean --o-observed-features-vector?

I was going to make sure you were using \
at then end of lines to let the terminal know that \
all these lines were part of the same command, and I can see you are doing that!

but I have the following error: **(1/1?) no such option: --o-observed-otus-vector Did you mean --o-observed-features-vector?

I wonder if you are using an older version of qiime (2021.2) with commands from a newer version. Check the docs for the diversity core-metrics-phylogenetic and select the version of Qiime2 that you have installed. 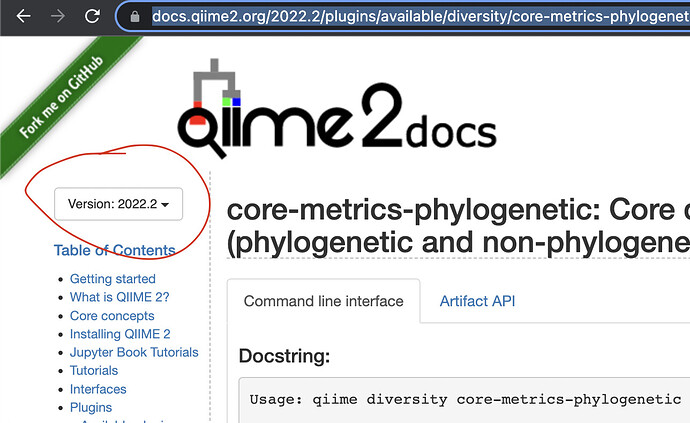 That should solve the no such option errors.

To solve the 'already exists, will not overwrite' errors, you have to remove the output directory the command made on previous runs, using the linux ReMove command rm -r core-metrics-results

We are making progress! Keep in touch

so, now after I will remove the command made on previous runs, What I will do to generate my phylogenetic tree (.tre, .nwk)?

so, now after I will remove the command made on previous runs, What I will do to generate my phylogenetic tree (.tre, .nwk)?

Try it and see!

If you get any other errors, post them here and we can help you through them.

Hi,
I red the instructions for 2021.2 version but I have not the files that required to run the analysis (such as --i-table ARTIFACT FeatureTable, --i-phylogeny ARTIFACT Phylogeny[Rooted].

How can I generate them?

Or I don't understand your suggestions?

How can I generate them?

Have you discovered the tutorials that cover each step of the process? I would start with the Moving Pictures tutorial to see how to create rooted-tree.qza and table.qza from your data.

(You may also want to install the newest version of Qiime2, as that includes bug-fixes and new features!

I am sorry if I was no clear but I have just generate all file since to core metrics. So the problem fortunately is resolved because I generate yesterday evening the core metrics folder.

Now , which is the next step to generate the phylogenetic tree (.tre, .nwk) to load in Microbiomeanalyst program?

I'm glad you are making progress and got the core metrics results.

Now , which is the next step to generate the phylogenetic tree (.tre, .nwk) to load in Microbiomeanalyst program?

This is the Qiime2 forums so we help you use Qiime2

, not MicrobiomeAnalyst. You could contact them if you have questions.

If you want to build a phylogenetic tree using Qiime2, that's also covered in the Moving Pictures tutorial.