I am using qiime2 to try taxonomic classification of an amplicon sequencing ITS dataset.

I trained the classifier:

Then I did classification with sklearn:

I noticed that sometime, depending on the number of reads, the use of the plugin “qiime feature-classifier classify-sklearn” may produce an output where most of the features are “unidentified” and very few features are classified in only two alternative ways.

In particular, I get very different results if I use reads deriving from different denoising with dada2: denoised reads that gave me, for example, a total of 1585260 reads (for 90 samples) and 1157 different features were classified as follows 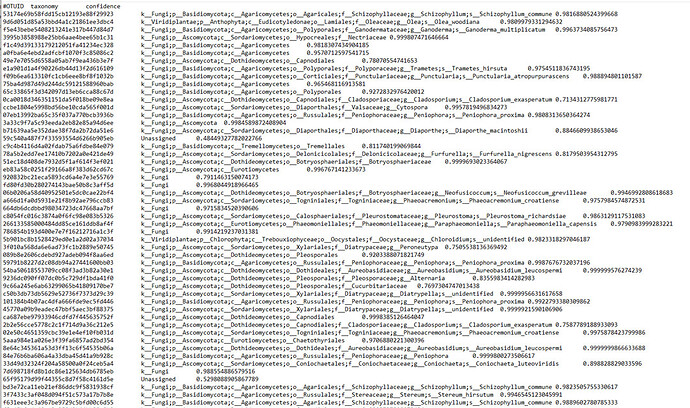 In the two classifications shown here, features with the same ID (that are exactly the same) are classified totally differently.

I really can’t understand where is the problem

Thanks to everyone that could help me!
Angela

We have a mystery on our hands!

In the two classifications shown here, features with the same ID (that are exactly the same) are classified totally differently.

That's not supposed to happen! The same classifier should always report the same value for the same ASVs. Of course, using a different classifier with --i-classifier will give you different results.

depending on the number of reads, the use of the plugin “qiime feature-classifier classify-sklearn” may produce an output where most of the features are “unidentified” and very few features are classified in only two alternative ways.

Would you be willing to help us replicate this bug? If you could post the full command you ran along with the input files, we can see how it works on our systems.

P.S. Welcome to the forums!

Hello Colin,
Thank you for your answer. It’s wanderful for me to be in the forum!

I attach the link for my file. I hope it will work

Thank you in advance for your help
Angela

Have you compared your two --o-denoising-stats files to see how many reads were able to join, and how long, on average, were the ones that did?

Hello Colin,
I compared the two --o-denoising-stats files. After dada2 denoising and filtering I obtained the following non-chimeric amounts of sequences. So I see that if I trunc my reverse reads at 170 I obtain more sequences maybe because in this way I take advantage of a better quality of reverse reads

So I thik that truncation at 170 is the best for me, but in this way I can’t have a good classification.

Most of all, what I can’t understand is that with the two alternative truncations I obtain features with the same ID that are classified differently.

This is not a bug, this is most likely due to mixed read orientations; trimming to different lengths is probably changing the inclusion or order of sequences that are used for read orientation prediction. See here for an explanation:

Hi @laurenmlui, Very strange. To give me something to work with, would you mind running qiime metadata tabulate on the full data (~1000 seqs) and non-buggy test subset (7-10 seqs) and posting the QZVs here? Are your reads all in the same orientation? What happens with you add --p-read-orientation same (or --p-read-orientation reverse-complement) to the command? I suspect the orientation predictor is going haywire so setting the correct orientation may set things straight. Why do I think that…

Some of your reads are being poorly classified no matter the direction, so it could also be that there are many non-target reads in your samples that are interfering with the orientation detector (since the orientation is chosen based on match to a reference sequence).

You can also specify the read orientation if this is known and you do not want classify-sklearn to choose for you.

I added --p-read-orientation same to the classification step and finally classification made sense, regardless of the setting for truncation during denoising and of the number of sequences I had.

My problem is solved! Thank you both for your helping,