I am using again my Qiime2 after about 1 month. Earlier It was working fine.
Between (During this time, once I tried to install BowTie using this terminal)

See two top lines in the image, which I think were not here before. 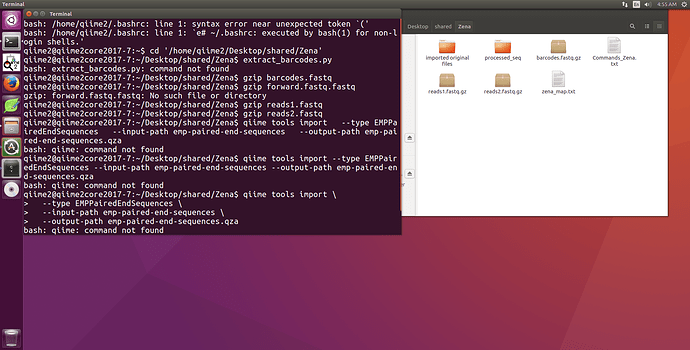 Hello @drmusk! It looks like your QIIME 2 environment isn’t being loaded when you launch a new terminal (automatic environment loading is a convenience that we have added to the QIIME 2 Virtual Machines, that way you don’t have to manually run source activate $NAME-OF-MY-Q2-ENV). Judging from your screenshot, it looks like your .bashrc file was edited (maybe by you, maybe by some other piece of software that you have installed in this VM). I can tell because the first two lines in the screenshot show errors that come from typos or invalid commands/config in that .bashrc file. Because the .bashrc is invalid, it isn’t loading correctly, which is preventing the QIIME 2 environment from being loaded by default.

You have a few options:

Good luck and thanks for posting!

Dear Dr Dillon
Thanks for a comprehensive reply.
As I told you that I tried to install bowtie2 using this terminal. So might I have messed-up stuff.
I will prefer to go with your option 1. Updating the Qiime2.10.
1 more silly question. As you suggested earlier, you may not be helpful in that but still I am asking it