Greetings - I'd like to verify I am interpreting the following LME result correctly.

I now want to see if, over time, how diversity 'behaves' as assessed by each primer set, while the Arc primer may sample overall lower diversity than the other primer sets I would expect with each sampling it's still efficient at picking up the diversity that is 'there', I would just expect it's regression line to be under that of Pro and V4 but with the same trend whether that trend is increasing, decreasing or flat. 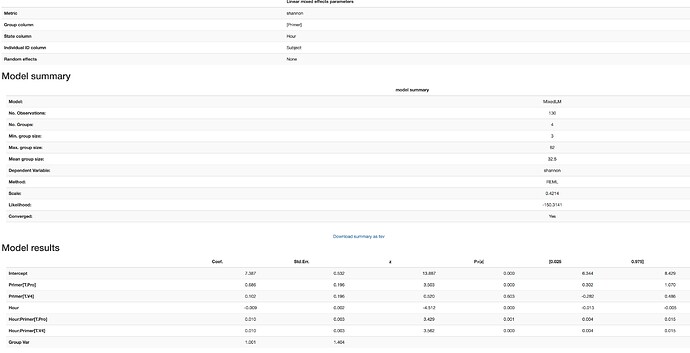 This makes it look like V4 and Pro are consistent in pulling out diversity over time with a slight increase over time...while Arc tanks. If yes, I'm inferring that over time composition changes such that the Arc primer set no longer is picking up as much diversity as V4/Pro - perhaps because of the particular community its targeting is crashing (even though it was published as picking up both bacteria and archaea)? Hence, this cannot be a 'stand-alone' set for inferences that would include bacteria/archaeal overall diversity over time...just archaeal and even that...I would probably filter out my table just Archaea and verify that is indeed the trend, with all three primer sets...or if it's another primer 'quirk'.

Should I be concerned about Group Var >1? Should I be wary of my residual's plot - everything hovers around zero but with expansive shaded intervals, Arc residuals are spread out and there's no overlap of residuals among primer groups.

I want to be sure I am interpreting the LME (and ran it) correctly before connecting more dots. Suggestions?

HI @mmelendrez,
Yes, I agree with your interpretation. The LME results are saying:

The residual plots look fine, though you may want to grab the data and plot independently to view without those confidence intervals. Ignore the CIs… samples for those primer sets were not collected at those time points so the CIs are just projections. If you are able to grab the data and examine closer, you may see that the residuals do display abnormal behavior.

Should I be concerned about Group Var >1?

No — this is just indicating that your subject IDs display a very high level of variance.

All in all, V4 and Pro look how I would expect, but Arc does not look good! Sounds like a good mystery

Just by way of follow up...I reran core-metrics-phylogenetics after filtering out bacteria - my feature table is just archaea to look at the LME trends by primer to see if the Archaeal diversity is downtrending over time for all primers sets (expectation) OR if the primer set Arc is just doing something else.

Summary - so V4 and Pro blow at recovering of Archaeal anything (as expected, they don't target archaea) so my filtered table was painful in selecting a --p-sampling-depth such that I retain enough samples from each primer set that I could run comparisons/LME. I selected 200 and 500

Opposite trends is the summary - V4 and Pro - retain the same slightly rising trend, Arc is decreasing over time.

The fact that the trend is the same may or may not be important. If Pro and V4 are so bad with Archaea as you say, then the observed trends are not representative anyway. It is probably not that ALL Archaea have a downward slope, but rather than particular clades that only Arc can hit are declining.

Truth - I suppose I’m comparing a bit of apples and oranges as well. The two bacterial primer sets agree. To really see if this Arc set is wonky - should probably run an experiment with another Arc set touted for archaea and see if the trends are similar between the two. My stuff doesn’t hinge on this, it was just an interesting finding that I am writing up for the sequencing center interested in setting up a dual design for interested investigators. Oooohhh experimental design, thou art a heartless b*tch sometimes…Thanks!