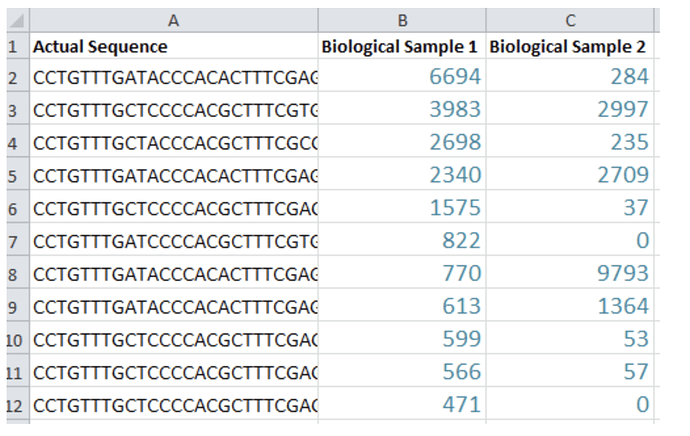 How can I can basically get the following: matrix of sample x feature frequencies like shown in attached photo.
So just to recap, my dream file would look something like in the picture below (and instead of the feature ID, if I can get the actual sequence).

Thanks so much once again,

There should be a flag, --p-no-hashed-feature-ids that will let you keep your original sequences in the feature table.

Hi Justine!
Where would I find this? in which command?

Basically I want to export this “table” and work on it in excel outside of qiime.

So basically,
I did the following commands:

So now, my excel file gives me the frequency of each feature ID in each biological sample. However, instead of feature ID, I would like to get the actual sequence. How can I do that?

You’re on the right track, I think!

I haven’t tested this yet (but its on my list of things to do today), but basically, I think you need to convert the representative sequences into a table and then add that as metadata. Let me play around with it and I’ll get back to you soon.

The thing I thought was going to work, didn’t work. So, I think I have a solution, but its somewhat inelegant and requires you to do some work in python. There are three paramters in this script you need to change:

You can run it by opening an ipython interpreter on your terminal by typing ipython and then run each line of code, updating your path for the three fp values.

Let us know how it works!

Thanks Justine.
So i tried to do what you said: ran ipython on my terminal window and ran the first command "import pandas as pd" and I got an error message (please see attached). 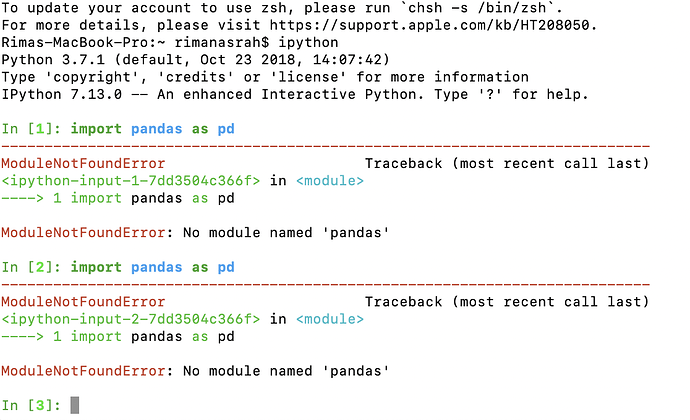 Thanks so much!
Rima

You need to run the code in your qiime2 enviroment. So, conda activate qiime2-… and then open ipython and run the code.

I looked at exporting the. rep seqs to a table, and they come out as a fasta in the current set up, which unfortunately, messed up my original idea.

So I ran the code in ipython (see attached) and I still get the same frequency matrix: feature ID x biological samples.

But instead of feature ID, I would like the actual sequence.

Attached is a copy of my code and of the output file. Did I miss anything? 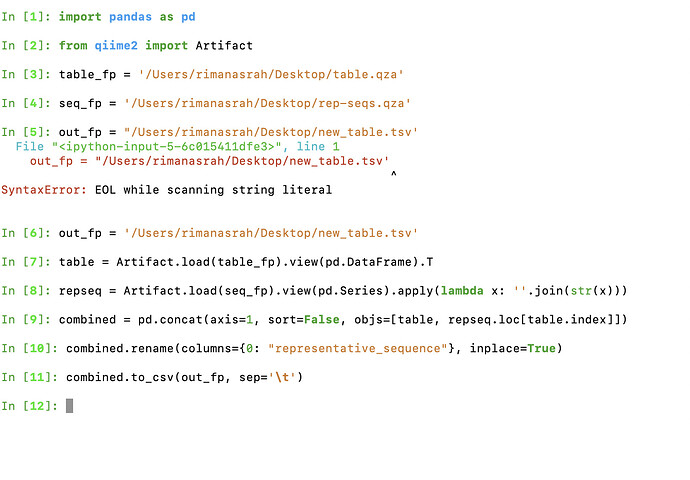 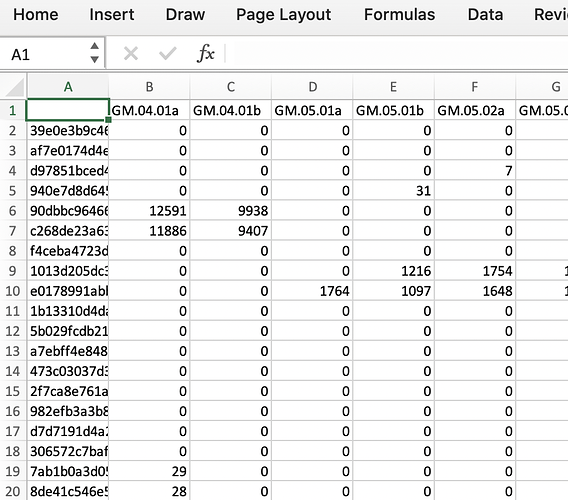 So, it ran correctly, but this adds the sequence at. the end as metadata. You could take the last sequence column in excel and move it over, or add one line to the end of the python after

@Nicholas_Bokulich also suggested this thread, because he thinks more qiime-o-matically than I do. So, I may have sent you on a wild goose chase (sorry).

Formatting a QIIME2 feature table for the R version of DADA2? User Support

Sure there is — secret QIIME 2 method. Use qiime feature-table group to relabel. We have a few examples floating around the forum of using this as a sneaky way to relabel sample IDs, e.g., here: But group can operate on feature IDs as well, and the same trick applies… additionally, we can transform a FeatureData[Sequence] artifact to metadata so that the sequence gets read in as the new label. Proof (using the moving pics tutorial data and Artifact API): >>> import qiime2 as q2, pandas as…

Thanks so much Justine and Nicholas!

Sorry, my bad, did not notice the last column! It worked like you suggested so thanks once again!