Hi,
I have demultiplexed paired-end data (two .fastq files). I did the following steps: 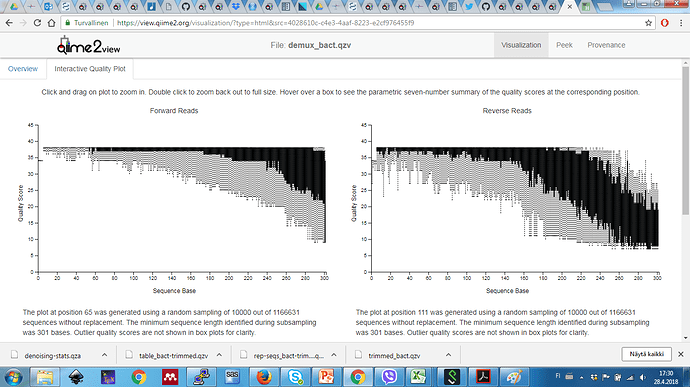 I am wondering if I have missed some steps and parameters that may have led such low counts or it's just normal results.

Reverse reads have very low quality towards the end (may be more strict trimming could help?) and would you even suggest to take only forwards reads in the analysis?

Hi @ksn, hopefully I can help a bit. Though I’d need more information to help answer your questions.

The primers used for sequencing were Ba9F and Ba515Rmod1 targeting the 525 bp.

I did not remove chimeras while denoising - I realised only after getting the results but now I am confused whether pooled or consensus based removal is better.

I will consider only forward reads and compare the results (i was already planning to do that but thanks for suggesting).

Glad I was able to help @ksn.

The choice of which chimera removal method to use largely depends upon the biological question you are trying to address. Especially, if your question depends upon analyzing low-diversity samples. I found this post about sample diversity on the DADA2 GitHub help page. There is also a discussion about sample “error history”. The following quote taken from this discussion:

First, it is not advised to pool samples that don’t share an “error history”, in particular samples that come from different sequencing runs or different PCR protocols. Samples from different runs should typically be run through the dada(…) function separately, so that the correct run-specific error rates can be learned.

Certainly quite a bit to consider.

Hopefully, other users in the forum can contribute their experiences between the two approaches.

One additional question: I have tecnical replicate for one of the samples - what’s the process to treat it during downstream analyses such comparing differential abundance.

As you know DADA2 will remove chimeras for you using a de novo approach.

Be sure to check the output of uchime-ref. There can be issues with the false-positive detection of chimeras when using usearch / vsearch with default settings. The reference sequence database being used and the parameter settings can affect how well uchime-ref can detect chimeras. There have been a few cases in which some of the most abundant OTUs were removed from the data even though they were clearly not chimeric based on follow-up checks.

To combat this, I’ve found that increasing the --p-minh to ~1.0 - 2.0 works well for 16S (decreases the sensitivity of detecting chimeras). But you should play with the parameters and sanity-check that the sequences flagged as being chimeric are reasonable.

One additional question: I have technical replicate for one of the samples - what’s the process to treat it during downstream analyses such comparing differential abundance.

As for your replicate sample, I’d consider the advice here.

Still about chimera removal method - would you recommend DADA2 de novo approach or vsearch method (reference based or de novo)?

No worries @ksn, glad I was able to help.

I did not mean to deter you from using uchime-denovo. In fact, many (myself included), occasionally make use of both de novo and reference-based chimera removal. I only meant to point out the considerations at each step.

I was trying alternative method because I didn't want to give up with the reverse reads. This time, I joined the reads using vsearch and the quality plot looks like below. 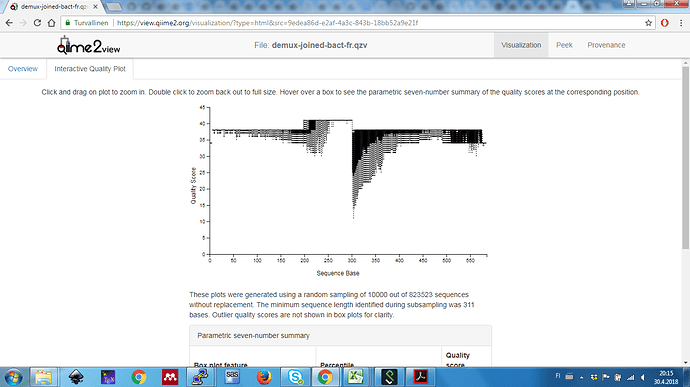 The stats of squence quality score doesn't look promising though.

Pairs that failed merging due to various reasons:
25 too few kmers found on same diagonal
1 potential tandem repeat
2624 too many differences
2336 alignment score too low, or score drop to high
40 staggered read pairs

I am planning to follow deblur method this time. Is there anything I would need to consider esp. on trimming because, when we take into account the joined reads, the quality is low in the middle of the sequence.

Alternatively, even if I continue to use DADA2, do you think that trimming off (--p-trim-left-r 50) around 50bases from 5' instead of truncating (--p-trunc-len-r 250) the length after around 250 will help in joining properly?

I am currently trying multiple options and I am sorry to ask about every issues.

Given your quality score plot, I would not suggest using these merged reads for down stream analysis.

There may be negative consequences of passing low-quality sequence data into denoising / exact sequence variant methods like deblur and DADA2. Some reasoning is outlined by @benjjneb here.

Hi Mike,
You mentioned that use denoise-single will only use the forward reads. But do you know any method to only use the reverse reads? My data have the high-quality reverse reads, but low quality forward-reads. Thanks in advance!

I suspect that you should be able to trick QIIME 2 to import the reverse reads as forward reads by using the manifest format approach. That is, just set the direction column for these reads to forward for all your R2 reads, and do not include your R1 reads.

I can not speak to any sequence data validation steps that occur via this or other import approaches. Perhaps @ebolyen, @thermokarst, or someone else can provide some insight on weather this will work, or if there is a more appropriate option.

Hi @wym199633,
@SoilRotifer is correct — you can trick QIIME2 into using the reverse reads as forward reads by using the manifest file format. With the exception of the CASAVA1.8 paired-end format, which expects specific filename patterns to differentiate the forward and reverse reads, all other formats in QIIME2 are direction-agnostic.

Thank you and @SoilRotifer! Why I didn’t think this before

Hi @wym199633, glad I was able help! Thanks @Nicholas_Bokulich for confirming!