I have query regarding one of my fungal samples (ITS1&2 region sequenced sample). It culture report result was fusarium species. whereas QIIME taxonomy identification analysis showed Aspergillus flavus.

I took both ITS 1 and ITS2 forward and reverse reads of my fungal sample and ran individually as emp-single-end-sequences. If I do blast analysis of generated OTU reads of my fungal sample means Fusarium species was seen along with Aspergillus flavus. But, I couldn't see fusarium species presence in taxaplot after adding that fusarium OTU seq in existing database too.

Herewith, I have attached screenshot of blast result as well as taxaplot for your perusal. kindly have a look on it. 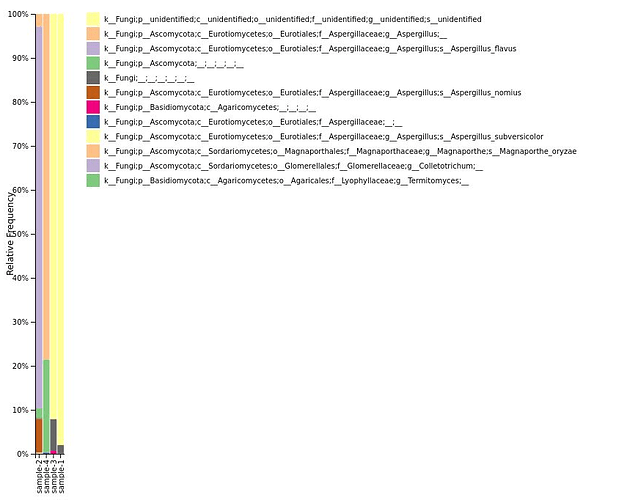 is there any way to see that fusarium species along with A.flavus in taxaplot?

Could I report this problem like that in manuscript for this sample?

Thanking you in advance. Looking forward to your reply

If I do blast analysis of generated OTU reads of my fungal sample means Fusarium species was seen along with Aspergillus flavus.

As far as I can tell from the NCBI-BLAST screenshot you posted, 16 A. flavus sequences are tied for top hit with 2 F. solani sequences. So either these species have identical ITS sequences, these species are in fact synonyms of each other, or one of them is misannotated. You may also want to look at how species are being identified in the culture report — e.g., are they sequencing the ITS or is this based on physiological/biochemical characteristics?

But, I couldn’t see fusarium species presence in taxaplot after adding that fusarium OTU seq in existing database too.

Simply adding the sequences in probably won’t help in this case — as a matter of fact, since NCBI-BLAST is showing A. flavus to be the top hit, if anything adding in those F. solani sequences could just “confuse” the classifier resulting in underclassification. Additionally, sequence orientation consensus taxonomy assignment with some taxonomy classification methods in q2-feature-classifier could explain why you see the same result rather than underclassifying.

Could I report this problem like that in manuscript for this sample?

I think it is fine to report in the manuscript that q2-feature-classifier reported A. flavus for that OTU but NCBI-BLAST results in a tie between A. flavus and F. solani sequences, and that this similarity between A. flavus and F. solani could explain the discrepancy between culture + sequencing results. But before doing so I recommend looking more closely at all results and especially similarity between the type strains of these species.

Tq so much for your reply and suggestions sir.