For the Moving Pictures and Atacama tutorials, the interactive quality score plots (after demultiplexing) had a limit of 150 sequence bases, which made sense in light of how MiSeq works to amplify the V4 region of the 16s rRNA gene: 150 bp read forward and a second 150 bp read in reverse, with 46 bp overlap in the middle (see picture attached). We understand that you can't truncate the reads too much or else there won't be enough overlap to join the reads with DADA2 in the next step......but with our own data (paired-end reads) our interactive quality plots have a limit of about 300. This leaves us confused about how the forward and reverse reads overlap. Did the MiSeq machine run differently than in this picture......??? Why is it 300? How do we know how much of the forward and reverse reads will overlap (as that will influence how much we trim and truncate)? 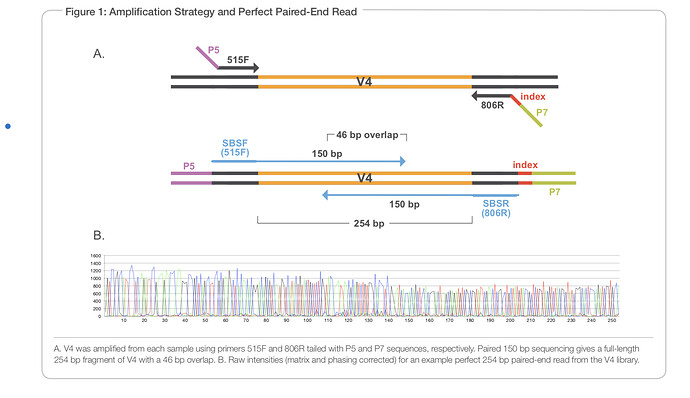 Hi @Kara,
The ‘limits’ in your plots which you mention relate to how many cycles your sequencing machine ran for, which itself is dependent on the Illumina chemistry kits/reagents that are being used on your sequencer. Basically, you pay more for more cycles which give you longer sequences. So in the case of the example above a 2 x 150bp cycles run is being illustrated. 150 cycles for the forward and 150 cycles for the reverse with 254bp region gives us 46bp overlap. This is sufficient for the shorter V4 region. In your data a 2x300bp cycles run was carried out. I’m assuming you are using a different primer set than the example above so your overlap calculations will have to be adjusted based on your expected target region. So, for example, if you used the V3-V4 region primers 341F-805R to produce an expected amplicon size of ~460bp then with a 2x300 cycle (600 total) run you have a 600-460=140bp overlap region. Hope this makes things a bit clearer.
p.s it looks as though you have really nice and good quality reads!

Thanks very much! We will look back at what our sequencer sent us regarding the primers used. I appreciate your help.