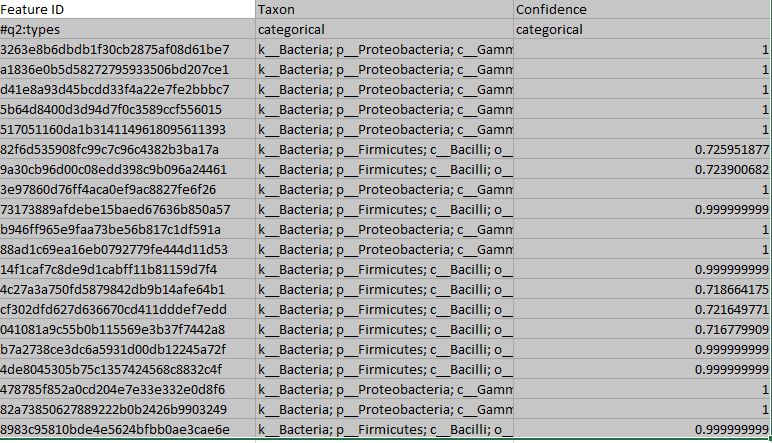 Sorry, still struggling with ASV vs. OTU table. I got this table out from this command:

was it an ASV table?

Hi! If I am not mistaking, in Qiime you will always have an ASV table until you performed clustering with VSEARCH, for example, with 97% threshold

Hi @Clara,
ASV (Amplicon Sequence Variant) tables are simply a higher resolution version of an OTU table. That means no clustering has been done and even a single nucleotide difference between features will show as a different feature in an ASV table. In contrast, an OTU table clusters features at a certain identity threshold (97% being the most common one) but doesn’t necessarily have to. You can think of an ASV table as a 100% identity threshold OTU table. Both of these tables hold information about the abundance of taxa within each sample.
The file you have extracted and shown is neither an ASV or an OTU table, but instead is a taxonomy file which is used to classify your features (the first column with hashed IDs) to some taxonomy group (second column). The confidence values are a measure of certainty with regards to how confident we are in our classification.

You would see an ASV table after running DADA2 or Deblur, the “dereplicators” and converting it from biom to .tsv. There goes an example:

Thanks so much for the explanation. I got the concept and able to produce it now (and I finally know how it looks like, thanks @lca123

Follow up question on this, since the ASV table is in an "ID" format, not a specific bacteria's name, how are we supposed to do with this data? For example, if for OTU table, we can collapse it into certain taxa that we are interested in (eg: genus), but what should we do after generating this ASV table?

Hi @Clara,
In Qiime2, taxonomy assignments are kept separate from your feature-table, so you’ll need to create a separate taxonomy artifact for downstream analysis that involve taxonomy. You can even collapse your ASV table down to the genus level if you wanted using the taxa collapse plugin. Have a look through the Moving Pictures tutorial, especially the taxonomy section for an example workflow of how to get and work with taxonomies.