Emperor plots different compared to a few weeks ago!

A few weeks ago I took screenshots of my Emperor plots for the four beta diversity metrics generated in the core-metrics-phylogenetic command, Jaccard, Weighted UniFrac, etc. and had them coloured by treatment group (AGP or control), although there were others of interest like sex, sampling day, etc. but I've only been looking at AGP vs control so far. For comparison, below was my weighted UniFrac result. 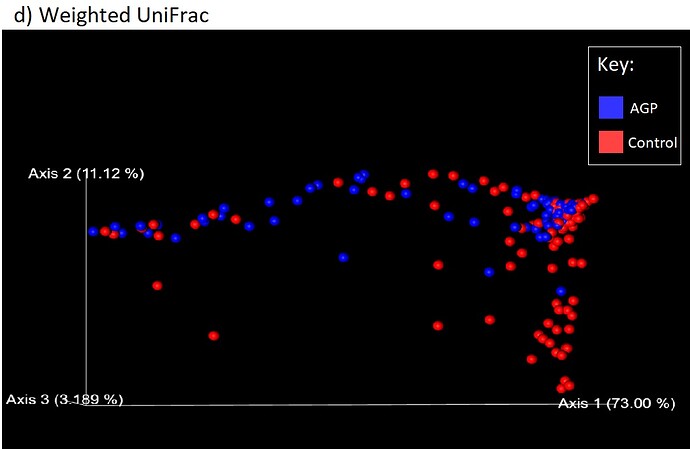 Today, I went back to look at the plot again and I noticed that 3 of the 4 plots look different to how they looked before. Only the Bray-Curtis one is the same. For example, the Weighted UniFrac plot now looks like this:

Does anyone know why the weighted and unweighted UniFrac and Jaccard Emperor plots look different now? Has there been an update? Should I use the new ones?

Thanks so much in advance!
Lindsay

Hello!
Plots should be the same, unless you rerun diversity plugin and created new plots. Since core-metrics plugin uses random rarefaction, plots always will be slightly different every time you run it.
However, your plots are very different from each other. My guess that you rerun it with different filtering, number of samples or different sampling depth and it affected the output (but it is only a guess). Are you sure that plots are the same and you did not run it again since screenshots?

Thanks for your reply!

I have figured it out and you're right. I have no memory of doing this but looking in my "failed stuff" folder I see that I have run the core metrics a previous time and that the first screenshot was from that output. I see that the Bray Curtis plot is also different and I'd got screenshots muddled up. Thank goodness for the provenance feature in QIIME 2 because I understand what happened and was able to confirm which tables were used for which plots, etc.!

However! The only difference between the old and new plots is that I removed mitochondrial and chloroplast sequences from the table before re-running. It made such a large difference to my results, which sort of confirms that I was right to do it, I guess?

The only difference between the old and new plots is that I removed mitochondrial and chloroplast sequences from the table before re-running.

Oh, that will definitely influence your results! I think that mystery is solved completely now.