I’ve been working on building a COI database from NCBI references, and separately, building a COI database from BOLD references. I wanted to combine the two and evaluate this merged data set. Part of that merging requires a dereplication step after combining the sequence and taxonomy records. I was getting an output wasn’t quite right - the dereplicated output was created without error, but a large number of sequences contained nearly empty taxonomy strings. Something 1/3 of all my sequences (tens of thousands!) had a string that looked like this:

Weird, right? Why would so many taxa get squashed that way. I got started with a bit of

detective work by running VSEARCH --derep_fulllength and generated a .uc file to see if I could identify cases where BOLD and NCBI sequences were good hits, but one was chosen over the other. Here’s one of those hits:

Did you spot it? Those darn fish

@BenKaehler - when I run get-ncbi-data, I’m sure Actinopteri is the Class you end up pulling, but I’m wondering why, and how often, BOLD is using these alternative naming schemes across the entire Taxonomy string ( example here, BOLD’s Actinopterygii vs. NCBI’s Actinopteri).

@SoilRotifer - There must be a way I can try to automate this, right? Something like making a list of all the strings from Kingdom through Family, maybe, and getting total counts of each, and then comparing how often the two names are identical… ugh. This seems like it’s destined to be a manual task.

Thanks for any strategies you can think of that might help me account for instances when BOLD and NCBI are going to end up using different naming strategies.

I’ve encountered this quite often. Welcome to the world of ever-changing and inconsistent taxonomies and taxonomy curation. Back in the day when I used UTAX / SINTAX (usearch), there was a step where it would warn you about “multiple parents” for lower-level taxonomies. Which would be highlighted in this case. There was another output that outlined exactly how the dereplicated sequence taxonomy was produced. In short… it was a very manual process… as I would just remove records that were obviously wrong.

You’ve probably seen many arthropod and mollusc taxonomies that have the same exact sequence! Basically, researchers submit a sequence for one… when it is really a contaminant sequence of another. This combination gave me many empty taxonomy strings.

Also, this is where other LCA taxonomy options may help. Majority-rule LCA might alleviate this problem, as it will just take the taxonomic annotation that occurs more often for that sequence… then again, that may note completely work either.

Not sure if this is possible, but if there is a way to construct a mapping of BOLD IDs to NCBI IDs, you can just replace one with the other, to use the taxonomy string of choice. For each case you’ll have to decide if you want the BOLD or the NCBI string. Either, or both, could be wrong…

Thanks for the validation in knowing I’m not crazy, and there isn’t a single and simple step to resolve this.

I’m going to amend the title at the moment as:
“Resolving taxonomic identities in COI, or

On the plus side, as I’ve started to make manual edits, I’m learning about the wide world of animal taxonomy… so many weird and amzing critters…

Turns out that I can account for a lot of the major discrepancies between BOLD and NCBI at the Class level. After a bit of digging, it appears that it’s frequently the case that a BOLD class name is a subclass in NCBI, and making that switch to the NCBI name is sufficient to resolve the two completely. Fortunately, just a handful of these Class names resolve tens of thousands of sequences:

Of course, I’m not proposing these are the correct names. Just that they should represent the same kind of thing with the same name, insofar as for my comparison of shared labels. If you spot anything here that seems like the switch should be in the reverse, feel free to let me know.

Hi @devonorourke, along the same lines, I’m not sure whether this is useful, but you could ask for

and that would solve the problem for Meuschenia scaber. It would probably cause a bunch of other problems, though.

I was looking through some of my old parsing code from several years ago, and what I had to do, depending on the marker gene and the available taxonomy for that marker gene, I would do what @BenKaehler suggested… that is, look at the overall accounting of available ranks for the sequence data I was trying to taxonomically curate. Often this required me to use a super- or sub- rank. I wish I would have remembered to suggest this earlier. But it looks like you’ve got it!

Great - thanks for the idea @BenKaehler.

The problems, as you might expect, run deep, and aren’t as simple as a single taxonomic level change. In fact, in the example I gave above with the fish, NCBI uses both terms (“Actinopterygii” and “Actinopteri”) as a Class label, so… I guess I need to just do the best I can, manually, for now.

Makes me think there will never be a simple way to programmatically merge BOLD and NCBI. In my first foray into cleaning up BOLD and NCBI records, there’s not an obvious “X references are less messy”, but perhaps others could articulate a reason to favor one over another.

In case anyone was interested in this thread (other than RESCRIPt crew of @SoilRotifer, @Nicholas_Bokulich, @BenKaehler @thermokarst), I thought I'd share the first draft of the results among the BOLD and NCBI labels. Happy to get feedback to improve clarity.

The goal was to depict how often a label might be similar or different between NCBI or BOLD taxonomies. Notably, I'm only talking about

Here's how to read the figure:

With three distinct sets of information, there are 7 ways they might interact. Each of these interactions are depicted as discrete labels along the x-axis. For example, the first x-axis label shows the number of taxonomic labels that are shared among all 3 sets - it's an "inner join" for all 3 groups. The second-fourth columns' are 2-way intersections. These represent those labels that are both in two groups, but not in the third group. I've labeled these as "exclusive" sets. The final three columns represent those taxonomic labels unique to a given set. 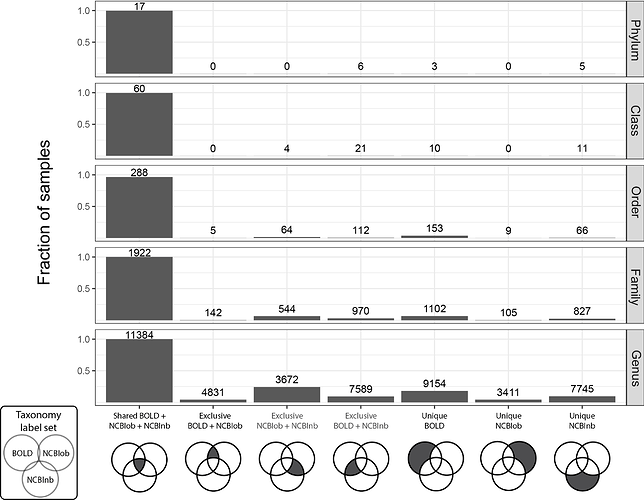