Hi , I did beta diversity analysis using jaccard_distance metric. But I am confused the result.
According to the table, there is a significant difference between NF and PF groups, and the distance from NF to PF is 1 according to the left upper graph. They are consistent. However, the distance from NL to PL is also 1 from the lower right graph which means two group shar no species, but P value is more than 0.05 from the table which means there is no significant difference between NL and PL. 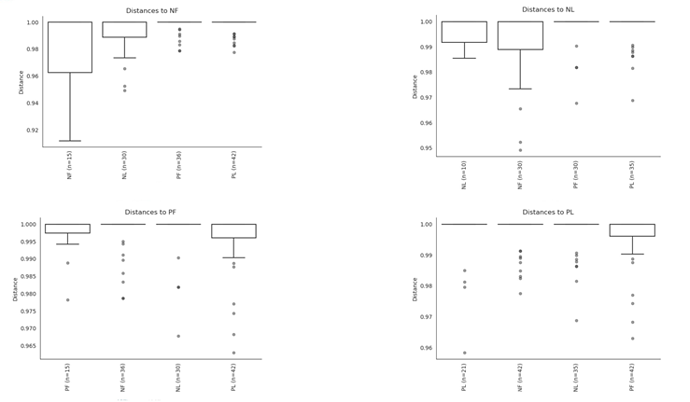 Hi @terren,
The Jaccard distance tells you how similar 2 samples are to each other based on the absence/presence of taxa. So a value of 1 is telling you that 100% of all the taxa you found in one sample (or group in this caes) was found in another.
The p-values you are looking at our unadjusted, you’ll want to look at the q-values instead which are the p-values but adjusted for multiple testing. Based on those it suggests that there are no differences between your groups, which also supports what the plots are showing.
Hope that clarifies it a bit.

Hi @terren,
It depends on the implementation of the scoring. Some tools use the score as is, some use a 1-x approach. Let’s see what the QIIME 2 does, using 2 identical matrices and calling the jaccard_sore from scikit learn:

So, as you can see a score of 1 means the 2 tables are identical.

I know it can be confusing, and I think it would be ideal for tools to explain their implementation in the documentations (not just QIIME 2, I find this to be an issue with most packages I use in R as well).

Thanks for your quick reply. But I am still puzzled about the following P_value and q_value. Which thresholds can be used to the criterion of significant differrence? 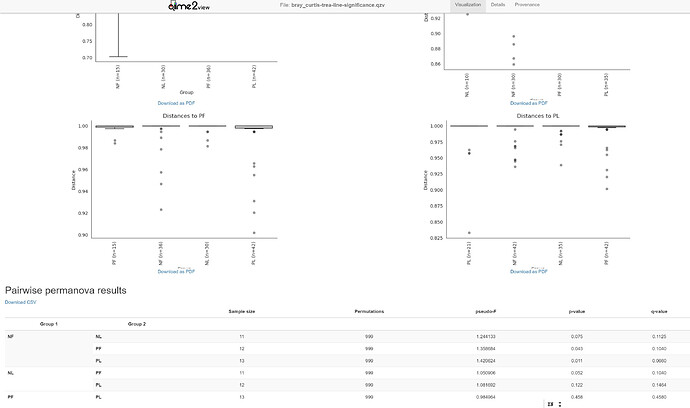 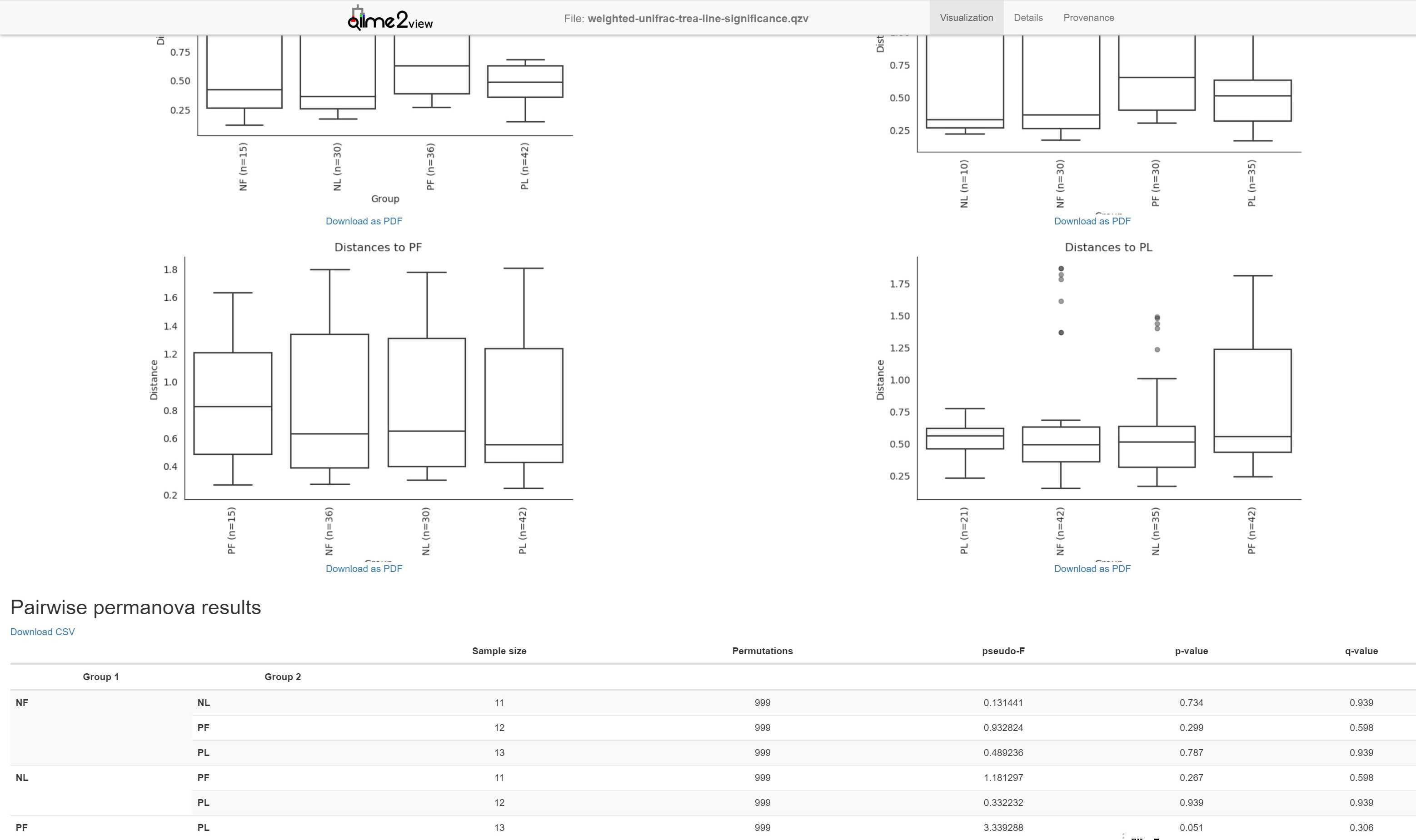 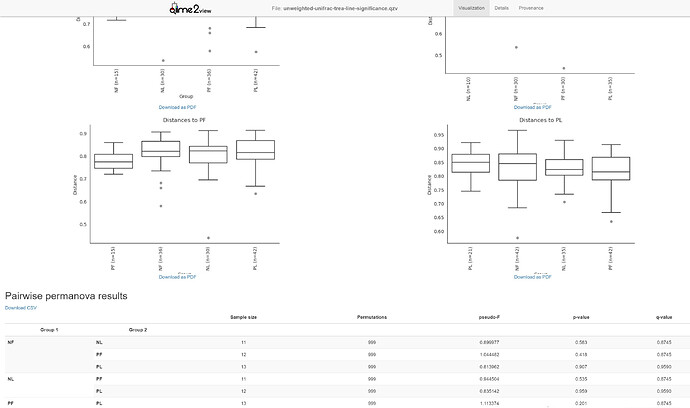 Hi @terren,
Those are simply the p-values and adjusted-p values. Common convention sets the cut off at p<0.05, so while your groups may appear to be different based on the unadjusted tests, this is not the case when you (appropriately) account for multiple testing (q-value). I would stick with the q-value and accept the null hypothesis.

Thanks.I have edited the question.Could you help me?

Hi @terren,
In the future, please don’t edit previous posts to add new questions, it’s a lot easier to follow a thread when all the replies are in chronic order.

It looks like you already asked this question on another thread and had an excellent response there. Please re-read the answer there from @ChrisKeefe.

I am confused the three following graphs

Whether have the groups significant differrence in each graph?

I believe I already answered this above as well. Based on the adjusted p values (labelled: q-value) you are accepting the null hypothesis which would suggest you are unable to detect differences between your groups.

Thanks for you very much. I am sorry to edit. When I posted my question, I found I have not ask clear. So I edited. After I edited and posted, I found you have replied. I am so sorry to trouble you.

You are looking at 3 different distance matrices, which have different biological interpretations. Chris gave you links to the definition of those matrices in another post.
And I already provided you with a link that explains what the boxplots mean exactly. Finally, we discussed that according to your q-values, your groups are NOT different from each other. So I’m not really sure which part you are referring to when you say you are still confused, can you be more specific please.

Thanks for your reply. For example as the following graphs, I know there is no differrence between groups. But I could understand the value of vertical coordinates of each box.When n=15 in the lower left graph , what is the meanning of 0.2 and 1.8 between PF and PF ? 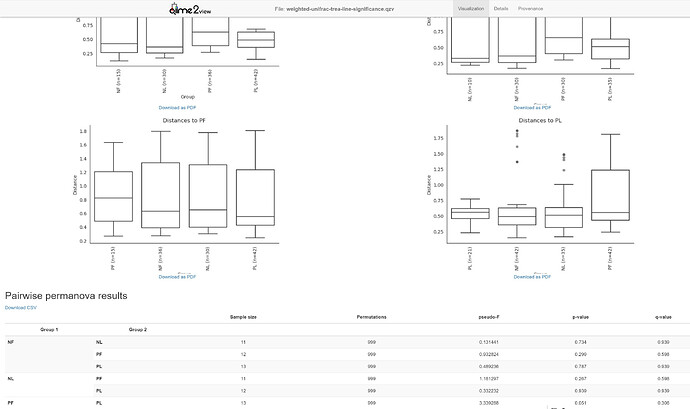 Hi @terren,
Ok, take a look at the diagram below I made (values are just made up) 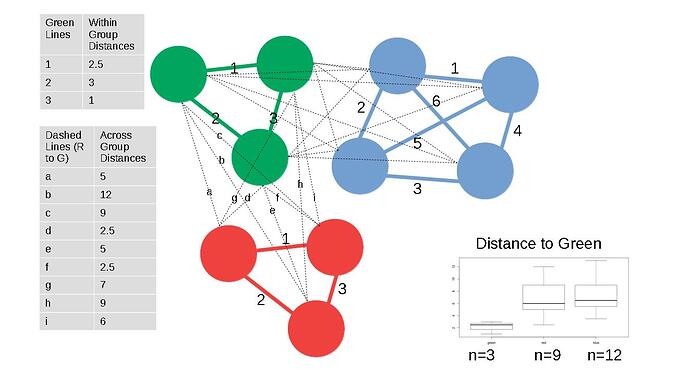 Now, what the null hypothesis for beta-group significance (default permanvoa) is that the distances within a group (say Green here) are similar to those distances across another group (to red in our example).

In your example, all the distances look about similar, suggesting there are no group clustering/differences.

Hope this clarifies things for you.

I got it. I am very appreciated with you.