Hello there everyone,
I am a student have a theory question I am struggling to find an answer to.

However, after some research, it looks like, there are no defined nucleotides that, for example, denote the V3-V4 region. 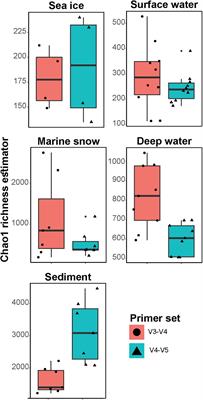 Microbial communities of the Arctic Ocean are poorly characterized in comparison to other aquatic environments as to their horizontal, vertical, and temporal turnover. Yet, recent studies showed that the Arctic marine ecosystem harbors unique...

Would anyone please explain this to me? My thought is that since it is a biological system, it probably isn't exact and so the area for these "regions" will only be a general length/area and not specifically X nucleotide --> X nucleotide.

If this is the case, then is there a reliable source that I can use to define these regions so I can choose them when doing my analysis?

You're very right about it not being exactly defined - it is biology, after all!

To answer your last question, I don't know a source that would already have all that information for all the taxa that you're interested in, but because of the length diversity, in my opinion, your best bet for accurately handling these sequences is using relevant (degenerate) primer sequences and RESCRIPT. You could also make a multiple sequence alignment and extract the relevant regions like that, but I haven't tried that before.

As an illustration:
When I was considering truncation lengths to use for DADA2, I wanted to know how long the V3-V4 region is, so I could ensure I had enough overlap between forward and reverse reads. Using the most recent SILVA database, RESCRIPT, and the primers for V3-V4 regions, I extracted the V3-V4 regions from the 16S sequences. From there I was able to estimate the variation of lengths between different taxonomic groups. For example, the V3-V4 regions from the class Clostridia were around 404 nt long (mode of the length distribution), whereas for the class Bacilli, the mode length was around 429 nt.

I hope this helps!

All the best,
Marko