Analysis of fungi at LSU (28S)

Hi.
I tired to get taxonomic information of LSU fungal community using “qiime feature-classifier classify-sklearn”.
I got the database from SILVA, release 119.
I trained the database by using this tutorial (https://docs.qiime2.org/2018.6/tutorials/feature-classifier/). The commands I used were bellow.

However, after I got the results (taxa-barplot), most sequences were not assigned at phylum level, but shown as “Eukaryota” (please see attached figure).
I think that it is something wrong.
When I searched some unassigned feature in BLAST, some of them had high similarity to known species.!

Hi @F18D029G,
It looks like your barplot did not attach — could you please try again? It may be too large to upload here — you may need to produce a smaller example barplot (filter out samples first), or post to dropbox etc and share the link here.

most sequences were not assigned at phylum level, but shown as “Eukaryota”

Most or all? The difference is important — if all, this is usually human error (e.g., the wrong amplicon site was used). If most, then the query sequences usually have something wrong with them. Once I see your barplot I can diagnose a little better.

Could you try classifying with qiime feature-classifier classify-consensus-blast? That will also help diagnose if this is an issue with the classifier or reference sequences.

out of interest, what orientation tool pre-qiime2 import would you recommend for mixed orientation reads?

out of interest, what orientation tool pre-qiime2 import would you recommend for mixed orientation reads? 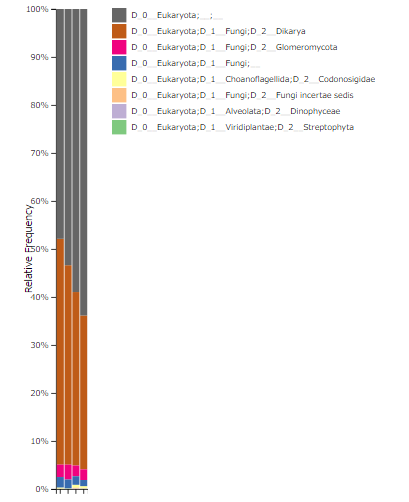 Can you see my barplot?

Thanks for uploading! I am guessing that this is a level 2 view and e.g., Dikarya are classified more deeply.

Since you say those unclassified sequences BLAST to known species, I suspect this may be a mixed read orientation issue. You can try re-orienting reads, or use one of QIIME 2’s other taxonomy classifiers, which are not sensitive to read orientation. At the very least, try this and if you get similar results then there is a different issue afoot (probably issues with the reference since you made your own custom reference):

Could you try classifying with qiime feature-classifier classify-consensus-blast ? That will also help diagnose if this is an issue with the classifier or reference sequences.

Let us know if that works!

I got simillar result, so I have issue about my reference. 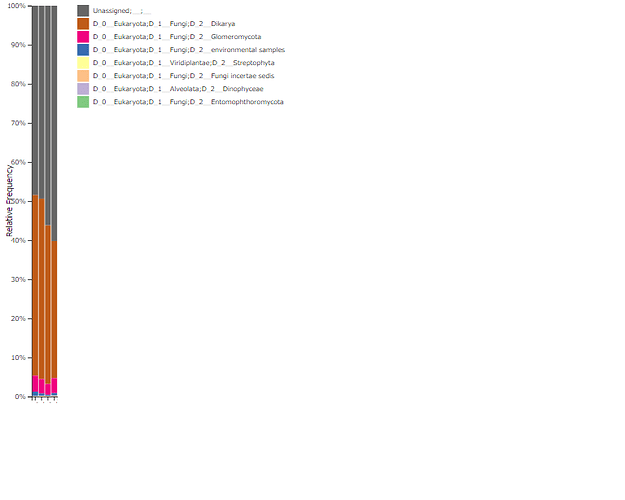 Does anyone who is analyzing LSU know the most suitable reference of LSU?

Hi @F18D029G,
Indeed, looks like this is probably an issue with the reference. What steps did you take to format the reference sequences and taxonomy?

I imagine SILVA is fine for LSU analysis but I am not sure. RDP also has a fungal LSU database that you could download for this. I have not used either of these so cannot comment on pros/cons.

Another possibility is that you are getting ~50% unclassified sequences because you are amplifying non-target DNA. Do you know if your primers amplify non-fungal DNA?

I used command this site.
(https://docs.qiime2.org/2018.8/tutorials/feature-classifier/)

I use fungal specific primer.
So, my sequence data is maybe fungal DNA.

What steps did you take to format the reference sequences and taxonomy?

What I meant is: did you just download the SILVA LSU database and import to QIIME 2 or did you take any other steps to format those files? Could you send me the fasta and taxonomy file that you imported to QIIME 2? I can take a look to make sure the format is correct.

You should contact the RDP admins for that — I do not know if it is available for download, but I do know that they have a LSU reference for their webtool classifier.

I use fungal specific primer.

Could you pull out some of the sequences that are not classifying, and run an NCBI blast search on them to see what these seqs could be? (this will just confirm that these are in fact fungal LSU sequences)

I got SILVA119 database for qiime. (https://drive.google.com/drive/folders/0Bz1utnb_nbhIfmFJRWxJeFdMOEk2emVBbWxxNy1LZVVBRllkeVdXbWtvMVJIZDdKYjNPV3c )

I wonder if something is going wrong at the extract-reads step. Is it possible that the SILVA 199 database does not contain full LSU and does not overlap your amplicon region?

Thank you for your help!
Kohei