I receive this message:

Metadata does not contain any columns that satisfy this visualizer's requirements. There must be at least one metadata column that contains categorical data, isn't empty, doesn't consist of unique values, and doesn't consist of exactly one value.

Debug info has been saved to /tmp/qiime2-q2cli-err-2lea_oet.log

I do not understand why it cannot read the metadata, since it did in the previous step just fine.

Attached is the .tsv file that I uploaded.

And this is the output: 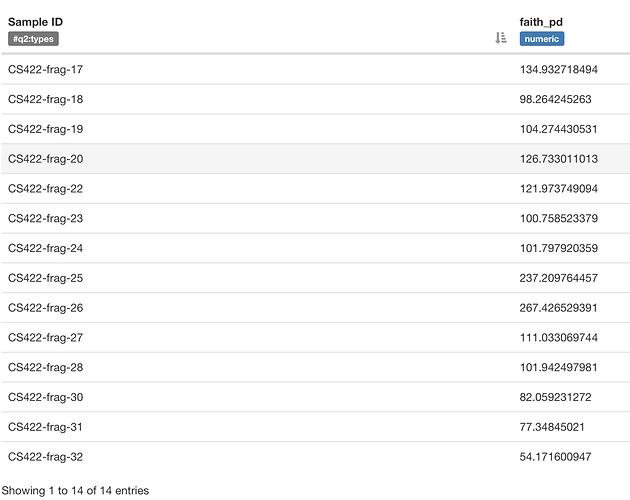 This is consistent with the sample depth that was set to exclude two of the samples that had sequence counts of 0, so we know that we still have the 14 samples that we intended to have.

What this error is telling us is that there is no grouping factor for the script to perform statistical testing. Based on your metadata file you are feeding it there are no replicates, rather every item under SampleTreatment is unique. That means the script cannot calculate averages, variance etc. You were able to calculate each sample’s alpha diversity index, but now you’re asking it to compare between groups of which there is none.
You’ll have to expand on your metadata file columns to include categories.
For example (and I’m totally making this up, you’ll make it the way it makes sense for your experiment)
Sample: A or B
Concentrations: 10 or 50
Chemical: urea or NH4 or control