RESCRIPt plugin not found even though installed

Hi, and thanks for reading!

I’m looking to install the RESCRIPt plugin, but I’m running it on my computing cluster (called “coombs”). However, the manager of my university’s computing cluster was reluctant to install to the cluster from a GitHub link and also worried that the plug-in might not be updated regularly, so they suggested that I install it on my own user profile instead. I did so, following the instructions (option 2) at the link above but using “pip install --user” instead of “pip install”. The cluster has QIIME2 2021.4 installed along with the other packages reference at the link above. The output suggested that RESCRIPt was successfully installed.

The problem is, QIIME doesn’t seem to be able to find the RESCRIPt plug-in, and gives an error when it is called. I think I need to direct QIIME to the proper directory where RESCRIPt is, but I’m not sure how to do so. Can anyone help? Please see my code and output below, and let me know if you need any other information. Thanks!

I’m not sure why the code looks weird in my first post. Here’s a screen shot. 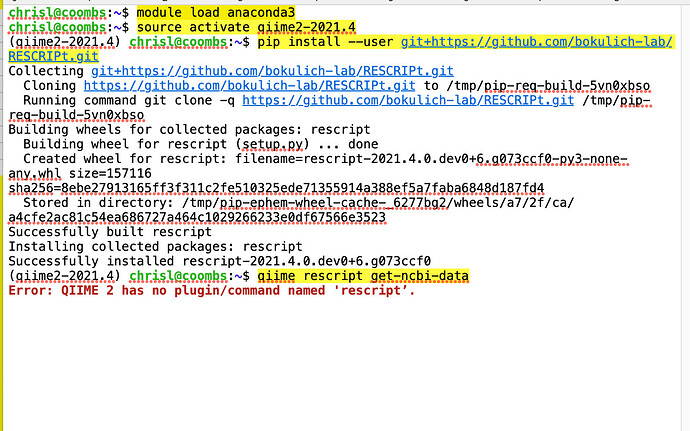 Ok so I figured it out. Here’s what I did in case some future person has a similar problem.

I used cd ~/.local to get to my local directory, then searched for where the pip install --user had put my package files. That turned out to be: ~/.local/lib/python3.8/site-packages and then there was a directory within that called rescript

So then I had to figure out how to get QIIME to find that and be able to access it as if it were with all the other packages. To see what paths it has access to, I opened python (just type python) then “import sys” then “sys.path”. Turns out, ~/.local/lib/python3.8/site-packages isn’t there.

So after some Googling, I used
export PYTHONPATH="${PYTHONPATH}:/home/chrisl/.local/lib/python3.8/site-packages/“

I think it’s important to do that after already having opened QIIME, because my system had multiple versions of python and it’s source paths depending on the environment I was in. But after running that, the rescript plug-in is now accessible by QIIME and I think it should work normally from now on.

Thanks for reaching out! It sounds like you may have had a couple of different environments floating around on this cluster, and you needed to specifically add the package files to the $PATH variable for the active environment you were using. In any case, I’m glad to hear you were able to get things worked out on your end! Please let us know if anything else comes up that you need assistance with.