Hey there,
I ran the "qiime diversity core-metrics-phylogenetic" and got the emperor visualizations.
I then ran again the same command providing the same phylogenetic tree. The only change is that the metadata has now a lot more collumns, but no change with the "older" ones.
Then I realized the weighted_unifrac_emperor plot is inverted. The samples are in the opposite position. I have checked and they are the same samples, so the placing is in the contrary. It is like there was a vector pointing from the top right to bottom left and then it turnos out pointing from the bottom left to top right. I put arrowns and selected the same few samples so you can well understand what I mean.
Does anyone know why is that and if there is any way of turning back?
All the best 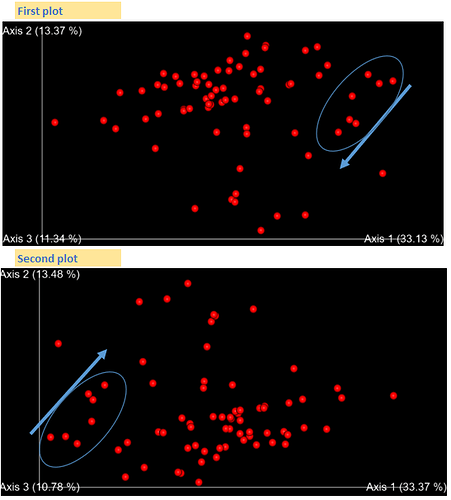 The reason that you see the change is because you’re re-doing rarefaction and so the distance matrix shifts slightly. (You can double check the alignment between the two matrices either using a mantel test or procrustes analysis if you still have both.)

You can flip the PCoA by going to the “axis” menu in Emperor and then selecting the “invert” checkbox for each axis you want ot flip. Since axes in PCoA are directionless, there is no consequence to flipping the axes.

If you want to prevent this in the future, you can skip the full core diveristy pipeline and re-generate the plots with new metadata using the emperor plugin. Here’s an older post that discusses what’s fully happening in core diversity analysis

Hello! I’ve got myself in a bit of a muddle with three separate issues going on. Huge apologies for the length of this, but I feel like one solution might cover all of them. I have already searched relentlessly for a solution on the forum but haven’t found anything to help. My first issue is that I just have got to the end of my initial analysis -assigned taxonomy, done alpha and beta diversity measurements, etc. - and now I have just realised that one of my samples has been categorised wrongl…

To add to this explanation, every time you run these, the values can shift/adjust slightly - it’s one of the features/weirdness that comes with these plots. It doesn’t mean that anything’s changed with your analysis or conclusions. It’s happened only a few times. Ben

Thank you Justine and Benjamin for the explanations.
I am reading that post to better understand.
All the best